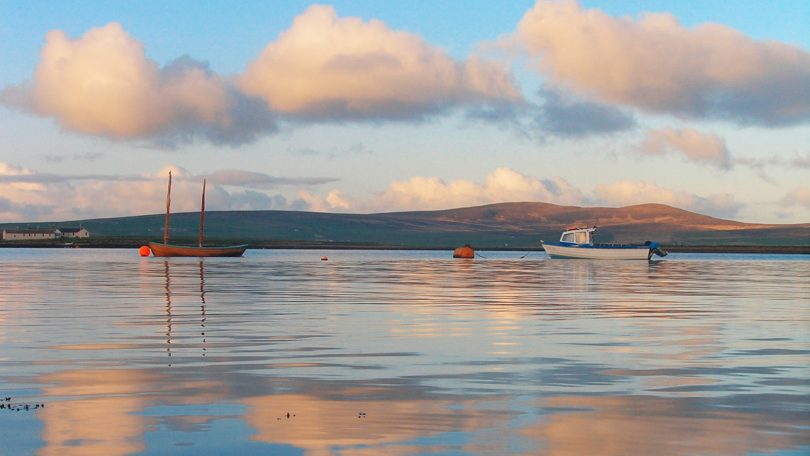 My aunties, Mary and Jane-Anne, ran the only shop, but there would sometimes be shortages. The main link with ‘the toon’ was by yole and, weather permitting, it was on Wednesdays – mart day. A small armada of Graemsay yoles swarmed round the slip and steps inside what was then called  the New Pier, now the South Pier.

At 7.30 am an oilskin was hung on the end of the house to let neighbours know there would be a trip to town that day. Then, after the milking, Prince was yoked in the sled (it was easier to yoke and load than the cart). The purpose-made wooden message boxes with ‘Windywalls’ painted neatly on the front were loaded with eggs, butter, cheese and maybe a hen for the butcher and the message lists for the shopkeepers to make up for the return journey.

The sled glided silently over the grass but the iron runners screeched and scraped on the stones of the lighthouse road as we proceeded to Quoys’ Noust, about a mile away. Here, Prince was tethered on the foreshore and the yole was loaded at the long low pier built of enormous stones that has served the inhabitants for many generations.

The ‘lapsters’ were removed from the luggy-box and packed in a wooden box with a bit of seaweed on top for the bus trip to Meil’s in Kirkwall, then onward to Billingsgate.

By this time (the 1940s) all the yoles had motor power but the masts and sails were still in the sail-house at the top of the noust.  I never saw them used.

The tide for the town

If it was slack water we would head straight for Stromness, about 20 minutes, but with the ebb we had to set a course to the east’ard out across the Teen of Sandside before entering the tide. The marks for crossing the Teen are ‘The Hill on the hill’. That is, the house in Graemsay known as The Hill on the edge of the Ward Hill of Hoy. This transit will take a yole safely across the rocks though you will find yourself ploughing the red-ware at low water springs.

The flood is the safe tide in Hoy Sound but we’d still have to bore westward along the Graemsay land to Clettack Skerry before venturing into the turbulent boiling stream that would spit us out at the Point o Ness. In fog we always crossed at slack water or with the flood, using a compass to keep a straight course across the sound. The only fear then was that we might get run down, so everyone was on listening alert – not easy with a noisy engine running. We carried a cow’s horn to blow a warning if we heard another vessel.

The weekly shopping was men’s work. Women only came to town to buy clothing or something special, or to visit relatives. The message boxes were left at the appropriate shops where they would be filled and left back to the pier by the merchants. Some would have to be collected later. Then there was be a trip to Angus’s or Shearer’s to order ‘hen’s maet’ and ‘calf’s mael’, Towers’ for paraffin and hardware, a call at the bank and a news gathering visit to the Mart.

By three o’clock it was time to think about home. If the wind was rising, Grandad would be getting anxious. The boat was loaded and the ‘hen’s maet’ was stowed on the lee side to raise the weather gunwale and keep the spray out. From a very young age I learned to steer a dry course. If there were women on board they had to be kept dry at all costs.

Back in Graemsay the work was not over. The yole was unloaded and put back on its moorings in the bay. The whole cargo was manhandled up to the foreshore to load the sled. By this time the horse was very pleased to see us.

From May to September this was the regular weekly routine, but winter was a bit different. The boats were hauled ashore. Launching and hauling was a big job so trips to the ‘toon’ were much less frequent. Everything was battened down, self-sufficiency being the order of the day – salt pork, sookit (dried) haddock and salted butter, cheese from the girnel, white puddings and bloody puddings, clapshot and kail, and an occasional boiled hen, but only if she’d stopped laying!

There were two other major transport jobs for the yoles – coal and livestock.

The coal and the cattle

The coal was usually loaded at Coalie-Chimmack’s (Sutherland’s) pier in Stromness. The yole was loaded well below her marks so this was a job for slack water on a fine day. In my experience it was discharged at Sandside’s slip. This is a substantial structure that was built by the Lighthouse Board to land the stones for the construction of Hoy High Lighthouse. My uncle, James o Garson, could drive his tractor and trailer right down this slip to the boat.

At the age of twelve I was entrusted to take the yole back across the bay to Quoys while James drove home with the coal. An important day for me, but my Dad was crossing Hoy Sound on his own at that age.

There used to be a large yole at Sandside called the Ark. I think it was built for the contractor building the lighthouses and was then acquired by Great Grandfather, Sam Sutherland, for carrying animals, but that was before my time. Between the wars John-Alec (Johnston) o The Kyuks (Crookshouse) bought a large ex-German navy pinnace which became known as the coo-bot (cow-boat). He kept her in that bit of bay behind the pier on the Outer Holm in Stromness Harbour.

She was fitted with a fold-down section on one side for the kye (cows) to get in and out. Sometimes an animal had to be encouraged to board by stubbing a cigarette butt on its backside. She was loaded at the Sandside slip and two yoles would tow her to Stromness at high water slack, to discharge at the New Pier slip. From there the animals were driven through the town to the Mart.

It was a real adventure for a cow that never saw a town before. On occasion a cow would break loose and jump overboard in Hoy Sound. One of the yoles would take her in tow to the Point o Ness. I recall Jock o Breckan leading a brine-soaked coo through the street from Ness to the Mart.

On another occasion the two yole skippers played a game of ‘chicken’, the two boats heading either side of the Ber buoy till Isaac o the Horn, who was in the coo-bot, lost his nerve and cut one of the painters.

In 1956 Graemsay got its pier, but the practice of running to town continued till about 1970.