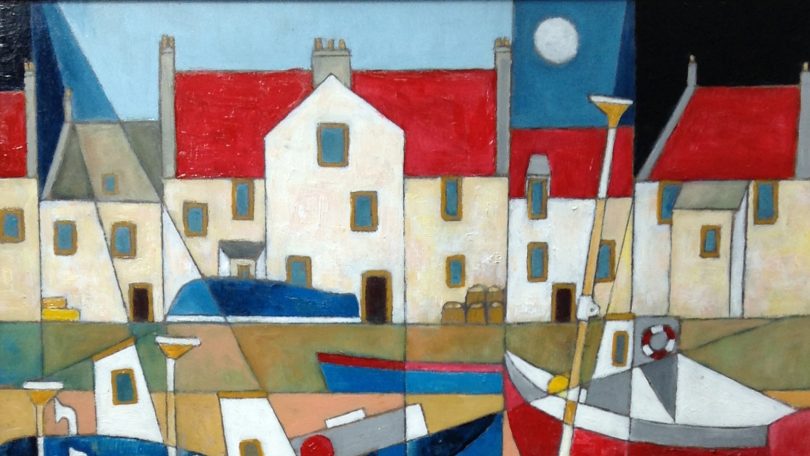 While light is the driving force for life on our planet, it is a basic element of art that can transform our vision, alter our spatial perceptions and change our moods. Colour is another crucial element of art that has an immediate and direct appeal to the eye. Even without a figurative subject colour has also the power to express emotion.

In 1666 Sir Isaac Newton became concerned about the coloured rainbow-like fringes visible at the edges of a lens. To simulate these, he got hold of a prism, reckoning correctly that the edge of a lens acted very like a prism.

Whereas from the days of Aristotle it was known that light was physically separated by a prism, Newton’s explanation lay in the physical phenomenon of refraction. Violet light is simply bent, or refracted, more than red light as it passes through the prism.

Crucially the extent of refraction is an absolute property of each colour and follows the order violet, blue, green, yellow, orange and red. Thus the white light of the sun is actually a ‘mixture’ of different colours.

However, sunlight is actually transmitted through space by electromagnetic waves. For our understanding of electromagnetic waves we owe a considerable debt to the efforts of two British giants of science, Michael Faraday and  the Scottish physicist James Clerk Maxwell. It was the latter who turned Faraday’s findings into a mathematical form writing down fundamental equations that described the electromagnetic spectrum that included visual light.

The colour of light is a matter of our perception

When light of a specific wavelength hits its sensitive receptor molecule, the receptor is excited in a matter of a thousandth of a second. This causes the firing of the photoreceptor cell and such signals travel to the brain where they are integrated by the visual areas of the brain cortex.

James Clerk Maxwell found that we perceive a mixture of red light and green light as yellow, not brown! The resultant yellow light is due to the way in which electrical signals from stimulated visual receptors are blended in the brain. Mixing light of  all colours of the visual spectrum actually produces white light and is referred to as ‘optical mixing’.

The colour of pigments

Over the years artists have used various types of pigment. Some have been derived from plant and other natural sources while others have resulted from the appliance of inorganic and organic chemistry. Despite their source, they all get their colours from the absorption and re-emission of light energy that depends on their  precise chemical structure.

Addition of light energy pushes the electrons of certain pigment atoms into excited states. As time passes, these return to their original state, giving off packets (quanta) of light energy in the process

Importantly, mixing of pigments is thus a ‘subtractive’ phenomenon. A mixture of red and yellow pigments, however, only weakly re-emits orange light. This is because the absorption displayed by both red and yellow pigments mixed together is very strong. Each time you add a pigment to the mixture another chunk of the visible spectrum is subtracted. To the viewer the colour become progressively murky.

The primary pigment colours are red, blue and yellow. By mixing these it is possible to get other colours except white.  Each has ‘complementary’ colour formed by a mixture of the other two, thus:

The modern ‘colour wheel’ is an artificial device in terms of physics, although it is a useful organising principle for artists. It shows the primary pigments and the secondary pigments obtained by mixing.

Pigment colours diametrically opposite  on the wheel are said to be ‘complementary’. When placed side by side, the vibrancy of each complementary pigment is greatly intensified. Indeed the particular context of a coloured pigment in a painting  can make it appear warmer or cooler or affect its lightness or darkness.

The proportional area of a pigment in an artwork can also cause dramatic visual effects.

What is a paint?

Basically a paint comprises dust-fine particles of pigment dispersed in a suitable binding agent, or medium. However most binding agents have the ability to refract, or bend rays of light as they travel through the paint. Thus although some pigments can appear glorious as dry powders, this glory can be considerably reduced when converted to paints following their mixing  with binding agents.

Before the fifteenth century an important binding agent was water used in the production of frescoes. Watercolours are of course thinned with water, but tempera paints are made using egg yolk as medium. Whereas tempera results in a uniform thin film of paint, paints that use oil (linseed, walnut or poppy) as a binding agent can be piled high on the paint surface.

Oil paints dry very slowly, allowing the artist to manipulate colours directly on the canvas, but importantly in oil paints each pigment particle is ‘insulated’ by a layer of fluid minimizing any long-term deleterious chemical interactions.

Artistic experiments with light and colour

Like scientists, artists have always been engaged in experimenting with materials, and their experiments with colour and light are well within this tradition.

From Renaissance times, artists have developed various approaches to depict the effects of light and shadow in their two-dimensional works. Artists such as Correggio and Caravaggio used shadows to create a dramatic effects. Certain parts of the painting can be lit up starkly, while the remainder are cast in varying degrees of deep shadow, creating an air of deliberate mystery.

Lively and bold colours can be used to emphasise the emotional aspects of a painting such as in the works of Raphael, Titian and Michelangelo. With a much more limited palette Rembrandt was nonetheless able to captivate emotions through subtle use of colour tones, creating deep shadows and golden light.

Later the English painter Turner proved a force for change. He was an intrepid experimenter with colour and his painting incorporated new, exotic and blazing colours, which broke through the ‘brown crusts’ of nineteenth-century painting.

In his desire to capture the interplay of light and colour, Turner was effectively a forerunner of  the Impressionists. For the Impressionists, it was essential to capture the ‘vibrations of colour’, which they achieved by espousing the concept of contrast in the use of complementary colours. Blue water was often embellished with strong orange, red-roofed houses sit in green foliage, and violet figures and shadows stand out against the creamy sails of yachts.

Towards the beginning of the twentieth century, the paintings of van Gogh probably exhibit the most forceful and emotional use of colour in Western art. Working around the beginning of the twentieth century, the Fauves felt even the Impressionists rather dull, and preferred to use colour at full throttle. A later development was the use of colour as both form and subject, evident from the abstract paintings of such artists as Malevich, Kandinsky, Delaunay, Klee, Albers and Mondrian.

Malevich believed that form was feeling and his most famous painting is of a black square   representing feeling with a white border representing a void. Kandinsky also liberated colour and form from having to represent anything. In his view, colour was the keyboard and the artist the pianist.

Colours also overlap like a tune in music with rhythmic pulses  of light and dark in the paintings of Delaunay, whereas Klee often used tonally graded colour altered to be brighter or darker in the portrayal of shifting light.

By the 1950s painters such as Rothko aimed to produce large works such that the viewer gets the impression of being totally enveloped in colour.

Light itself as an art form

Many contemporary artists have incorporated actual light sources into their works. In the 1960s, although interest in the various manifestations of light was already in the air, artists such as Daniel Flavin made light a centre point of interest not only as a medium but also as a material, turning ordinary commercial fluorescent strip lighting into art objects.

Another artist, James Turrell, works at the very interface between art and science. A former student of astronomy, mathematics and psychology, the aim of his work is to make light tangible to the eyes in its material quality, turning perception itself into a topic of art. He makes human perception the object of viewing,

In summary it can be appreciated that overall a very significant numbers of artists have made considerable efforts to experiment with both colour and light and also to incorporate many scientific developments in their works.