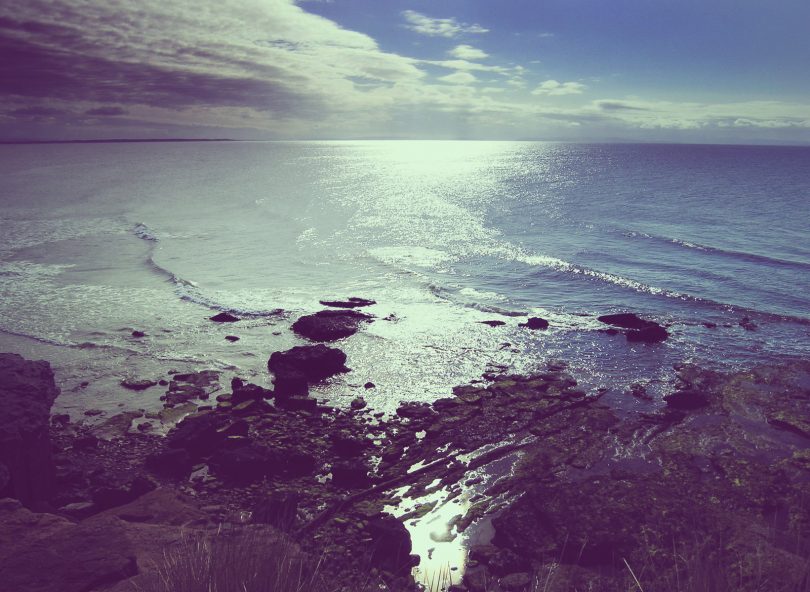 Towards the end of the 3rd century AD there was considerable unrest in the Western Roman Empire. The western Caesar, Constantius, defeated the usurper, Carausius, in Gaul and then invaded Britain where he put down a revolt by Allectus.

In 305 Constantius was appointed Western Emperor, and he immediately returned to Britain where the Romanised south faced invasion from the Pictish north. He effectively controlled the Picts and died at York on the 25th July 306.

To contain  the Picts and restrain them to their northern heartlands of Caithness and Orkney, it is proposed that Constantius built a series of forts along the North-East coast of Scotland, stretching from near Peterhead in the east to Inverness in the west, with the possibility that these forts extended across the Black Isle.

This theory is founded on the existence of a Roman fort at Boyndie, near Banff. On its own this fort is useless and it only makes sense as part of an integrated system. There is slight evidence of similar forts at Inverugie and Brodie, but the burden of proof of this hypothesis must rest upon verification of the nature of the site at Boyndie.

The Romans had various techniques of dealing with recalcitrant natives on the borders of their empire. Peace under Roman hegemony was preferred, but any signs of revolt usually resulted in a massacre of the dissatisfied.

Where the military balance between the invader and the invaded was about equal, then the Romans would buy peace with bribery and corruption, and the frontiers of the Empire are marked by one time donations of Roman silver coins which have been carefully buried and then carelessly forgotten.

If none of the above were applicable and geographical conditions were favourable then the Romans would erect a guarded wall, the equivalent of a frontier fence.

The first Roman frontier in Scotland was erected circa 80 AD along the Gask ridge, sealing off Fife from the rest of  the country. Subsequent to the battle of Mons Graupius, Agricola started building a defensive ditch between the Forth and the Clyde, but this defence, along with the Gask ridge forts, were subsequently abandoned when Roman troops were withdrawn from Scotland, circa 86 AD.

In 122 AD the emperor Hadrian visited Britain and ordered the construction of a great wall across Britain stretching from Wallsend-on-Tyne on the east to Bowness-on-Solway on the west. Associated with the wall were sixteen forts and smaller fortlets at one-mile intervals. This massive wall served various purposes until it was eventually overwhelmed by external enemies once the Romans had finally withdrawn from Britain at the start of the 5th century.

Antonius Pius succeeded Hadrian as emperor in 138 AD and, although not an imperialist, he did move the Roman frontier in Britain back to Agricola’s line between the Forth and Tay. Unlike Hadrian’s wall, Antonine’s was wholly of turf with a massive ditch some 4 metres in depth and with small fortlets between a number of  fortresses.

There is argument as to how long the Antonine wall was in use, but it was finally abandoned before the end of the second century. However, Bede alleges that at the beginning of the 5th century a Roman legion repaired Antonine’s wall and handed it over to the locals for garrisoning.

However, for most of the time that the Romans were in Britain the only frontier, sporadically in use, was Hadrian’s wall, but the end of the third century ushered in a period of external and internal strife in the empire and this resulted in the building of a further and final wall; not across the country to stop movement by land, but along the coast to counter a threat coming from the sea.

In about 250 AD an inn keeper’s daughter gave birth to a boy, Constantius. The boy joined the Roman army and steadily worked his way up through the ranks, so that by 293 AD he was appointed by Diocletian as Caesar for the western part of the empire. By 296 AD he had put down a revolt in Britain led by Carausius.

By 306 AD he was at his headquarters at Eboracum (now York) when he was joined by his son, Constantine, who already had a distinguished military career. When Constantius died in summer of that year, the troops unanimously declared Constantine as Emperor.

This was not acceptable to Maximian, one of the Caesars, and Constantine defeated him at the battle of Marseilles in 310 AD and followed this up with victories over the usurper Maxentius at Turin, Verona and, finally, near Rome. Constantine moved the capital of the empire to Byzantium (Constantinople, now Istanbul), became a Christian and instituted the belief in the Holy Trinity.

However, it is not Constantine’s achievements as first Christian emperor nor as the founder of Byzantium, but his father’s activities in the north of Scotland which interest me.

On Wednesday 5th July 1989 I was driving the late Professor Barri Jones on what was intended to be a reconnaissance of the Deveron valley. We set out from Elgin after lunch and about forty-five minutes later we were approaching Banff along the A98 when I drew Barri’s attention to what appeared to be ill defined crop marks in the field just to the right of the Whitehills turn-off.

Barri was not convinced, and certainly the marks were not definitive and when we got closer and saw that the crop was oil seed rape, this did nothing for my confidence. However we returned to Elgin where I borrowed a video camera from the Hydro Board and we then drove through to Inverness. There I hired a two-seater Cessna and with Barri on board, with the clumsy video camera, waved him off. After well over an hour the Cessna returned and we drove home to Elgin for supper and debriefing.

Barri was still not too optimistic, but he had taken photographs and had also used the video camera. We plugged the latter into the television and rolled the tape. What appeared to be a succession of blobs filled the screen.

As the aircraft swung round on a right-hand turn, nothing could be differentiated except the occasional blobs and then, suddenly, and lasting no more than a second or two, the blobs disappeared and there, as if in three dimensions, was an almost complete Roman-style fort with rounded turrets at the two corners facing the camera and a gate between the two. This apparition appeared and just as suddenly disappeared.

In the next day I showed the tape to knowledgeable people and in every case they responded with “Roman fort”. In subsequent years the field was sown in wheat and barley, but despite varying weather conditions never showed the slightest sign of a crop mark.

In September of 1989, Harry Sanger Ltd carried out a ground radar examination of the site and determined the presence of a ditch enclosing an area of 1.3 hectares or 3 acres. In the following September, several trial trenches were dug round the believed ditch and these confirmed its very badly eroded presence. A small piece of coarse Roman pottery was uncovered, but the fragment was eventually lost and the name of the person who identified it is not known.

A fuller account of the excavations is given by R. A. Gregory in the Proceedings of the Society of Antiquaries of Scotland, pages 210-214. Because the site proved so difficult to interpret and as there were more interesting and easier sites to excavate in Moray, interest in Boyndie was short-lived and it was ignored over the next ten years by Barri and myself.

Ten years later Barri was dead and a year later I was very ill, slowly recovering from heart surgery and kept alive by a hastily installed pace-maker. Field archaeology was and still is impossible and I had to content myself by examining aerial photographs and considering past activities.

Examination of aerial photographs was not too taxing and was occasionally rewarding. A few years ago I was looking at a Luftwaffe photograph, taken in September 1940, and now catalogued by the RCAHMS under reference A.GB 10913 Forres Airfield, when just to the south of the A96 and opposite the turn off to Brodie castle, at Grid Reference NH988 571 there was a small square crop-mark with rounded corners and enclosing an area of 1.5 hectares or 3.5 acres.

It was to be some time before the connection between the two crop marks at Boyndie and Brodie was realised and that they were very probably contemporary. Even allowing for the small scale of the Luftwaffe photograph the similarity in shape and size was significant. But just as one swallow does not make a summer, so two forts do not make a defensive line, and here reasonable certainty gives way to hypothesis.

Just to the north of Peterhead the river Ugie makes its way to the sea, and adjacent at Grid Reference NK102 487 is a motte which appears to be positioned in the centre of a barely discernable rectangular enclosure, which just might be all that remains of a Roman fort, similar to Tomen-y-mur in Wales.

With three forts spread out in a line along the southern shore of the Moray Firth it is now permissible to suggest that here there was a Roman frontier, circa 300 AD, stretching from the North Sea to the inner Moray Firth and was presumably intended to defend Moray from the incursions of the Picts, whose strength lay in Caithness and the Northern Isles, and was expressed in their ability to mount sea-borne invasions.

But this argument hangs on a three very shoogly nails, of which the motte at Inverugie is the weakest. So before travelling further into the realms of fantasy, it would be prudent to establish first the nature of the crop mark at Boyndie. I do not suggest that the whole site be examined, but I do appeal for a limited excavation to establish the nature of the entrance. I am not competent to estimate how long this would take, but I am willing to offer some modest financial support.

This paper was written without access to any documentation, except Gregory’s article, and therefore the initial historical part has been dependent upon, an occasional failing, memory.

Born in Kinloss in 1924, Ian Keillar volunteered for the RAF at the age of seventeen. Wartime service in the Middle East and Africa began a lifelong interest in history and archaeology. In 1964 he joined the Hydro Board and transferred his aerial archaeological skills to his new environment in Moray where he lived until his death in 2010. His insight and commitment led to many articles and papers and the book Romans in Moray, and to the Society of Antiquaries of Scotland’s Dorothy Marshall Medal, awarded every three years to an individual who, in a voluntary capacity, has made an outstanding contribution to Scottish archaeology.