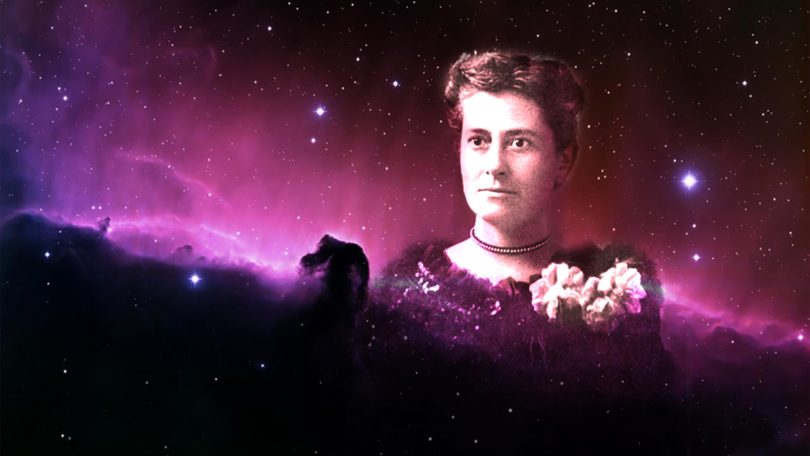 This year is the 125th anniversary of the discovery of the Horsehead Nebula in Orion, one of the great achievements of one of many women in science. It came at a time when a woman’s role was chiefly that of housemaid and mother, and it is in this exact role that a fascinating woman, Williamina Fleming from Dundee in Scotland began her scientific career.

In a period of history before women’s movements to demand equality, and long before the suffragettes, Fleming was successful in establishing herself as a scientist in a male-dominated field and earned respect and recognition as a world-renowned astronomer.

On marrying, she had moved to Boston with her husband who had left her while she was pregnant, so she found herself in a new country as a single mother. Working for Edward Charles Pickering, Director of Harvard College Observatory, she was employed as housekeeper to support herself and her young son. As an astronomer, Pickering’s grand plan was to photograph the entire sky and systematically catalogue each star visible in the resulting images. History records that he had become increasingly frustrated with the efforts (or lack of) from his male employees at the time. His frustration was such that Pickering is said to have made the statement that “my housekeeper could do better”.

Having recognised her diligence in her work for him and her obvious high intelligence, he went on to employ her initially to do clerical work. She was extremely disciplined, and her quick mind and organisational abilities proved to be ideally suited for the task of classifying and documenting the research data.

Fleming set out to devise a new system of classification to replace the existing method developed by Father Angelo Secchi which she deemed to be inefficient and in need of updating. The new system grouped stars according to how much hydrogen was visible in their spectra, with those with the most hydrogen content classified as ‘A-type’, ‘B-type’, etc. The system was later tweaked by another female colleague and is still used today by astronomers as O, B, A, F, G, K, M, L, T, and sometimes Y.

Her contributions to astronomical research proved to be so important that Pickering made the decision to employ not just one, but a whole team of women based on the evidence of their abilities in the field and the undisputed fact that he could pay them far less than male employees who had delivered far less in terms of results.

Pickering’s team was known as ‘Harvard’s Computers’, a name that goes some way to acknowledging the respect they earned in the field. Some of the more disgruntled researchers were known to use the derogatory nickname of ‘Pickering’s Harem’; such was the extent of male derision. The decision to employ Fleming and her team of women scientists was one that Pickering was never to regret, and it led to academic success and worldwide recognition in the field of astronomy.

Fleming went on to graduate with a degree in physics and combined her great interest in photography with her science to produce and analyse some of the highest quality stellar photographs then known. In her lifetime she discovered and catalogued over 10,000 stars.

It was in one of her early photographs catalogued as plate B2312 that Fleming made the discovery of an object described as “a semi-circular indentation 5 minutes in diameter 30 minutes south of Zeta [Orionis]”. This later acquired the nickname of the ‘Horsehead Nebula’ that we know so well today.

In 1910 she published papers in scientific journals on her work studying extremely hot, dense stars at the end of their stellar life, and gave them the term ‘white dwarfs’. We now know that our own sun will one day become one of Fleming’s ‘white dwarfs’ when it eventually runs out of hydrogen.

Fleming was among the first generation of women astronomers and the first to receive a corporate appointment at Harvard. She is recorded as the first American woman to join the Royal Astronomy Society of London, although she is in fact Scottish. In 1907 she published a book A Photographic Study of Variable Stars which contained data on over 200 variable stars. At this point in her career she had discovered over 50 nebulae, one of which she called ‘Pickering’s Triangle’. In 1911 she became an honorary member of the Astronomical Society of Mexico and the Astronomical Society of France. She also received the Guadalupe Almendaro Medal and has a lunar crater named in her honour. The book Stars Having Peculiar Spectra was published posthumously in 1912.

Williamina Fleming is a true role model for today’s young women in science, proving that hard work, passion and dedication is the key to success.