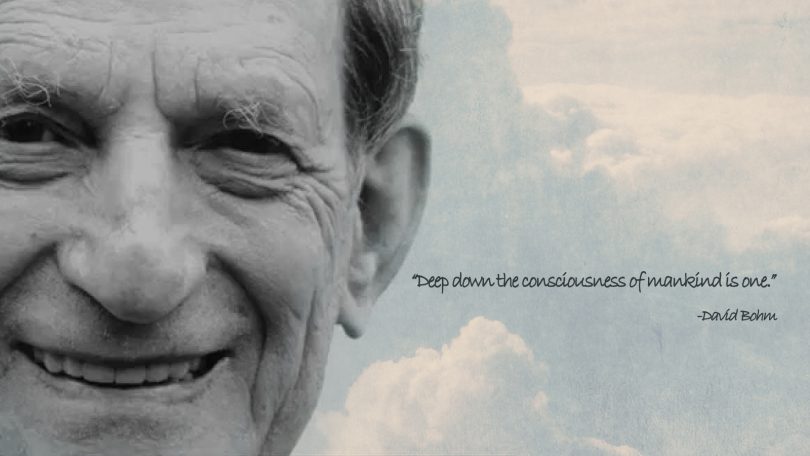 He was born exactly 100 years ago today, and even in his own profession of physics he is not as well known as he should be. But his vision was global, and what it has to say to the world today is as fresh as this morning’s newspaper headlines.

In fact, it’s even fresher than that, because he tackled what is behind the headlines, and what is behind many of the world’s most intractable problems of today – the idea that human divisions transcend our common nature, that what divides is more important than what unites.

The story of David Bohm

David Bohm was born in the city of Wilkes-Barre in Pennsylvania on December 20th 1917. His career in physics started at Princeton but he had to seek work elsewhere in the McCarthy era due to a youthful involvement with communist groups.

Those years of travel brought him contacts and dialogue outwith the more established networks of physicists and gave the opportunity for his independent spirit to develop. His questioning started with quantum theory.

A search for deeper meaning

The established view of quantum theory, the so-called Copenhagen Interpretation, was that it was simply a means of making calculations, with no deeper meaning.

Bohm found this restrictive. He had come to science in childhood through books on astronomy and science fiction, and he wanted something deeper from science than keeping accounts of calculations. The established view was that you couldn’t make a model to explain quantum theory – so he went out and made one that gave an explanation, and a particularly clear one at that.

He faced rigid opposition; but gradually a few others stood up and agreed with him. And bis approach has stimulated a process of investigation by others which has resulted in the development of quantum computing.

But his achievements in physics were only the start. What makes him so relevant today is the picture he built of human society – and the underlying causes of many of the tough challenges we all face.

A flaw in our worldview

Our global challenges, he says, have their roots in science – in the orthodox scientific picture of the world as a kind of machine built of tiny building blocks. That picture, he declared, is (a) wrong and (b) harmful. It’s wrong because deep down what appear to be particles are concentrations of energy that emerge and fade like vortices in a river, and the universe is built out of abstract forms and processes. And it’s harmful because it leads to a picture of society as fragmented, and that perception shapes human actions.

Art, science, technology, and human work in general, are divided up into specialities, each considered to be separate in essence from the others,” he wrote. “Society as a whole has developed in such a way that it is broken up into separate nations and different religious, political, economic, racial groups, etc. Man’s natural environment has correspondingly been seen as an aggregate of separately existent parts, to be exploited by different groups of people.”

And he goes on:

The notion that all these fragments are separately existent is evidently an illusion, and this illusion cannot do other than lead to endless conflict and confusion. Indeed, the attempt to live according to the notion that the fragments are really separate is, in essence, what had led to the growing series of extremely urgent crises that is confronting us today. Thus, as is now well known, this way of life has brought about pollution, destruction of the balance of nature, over-population, world-wide economic and political disorder, and the creation of an overall environment that is neither physically nor mentally healthy for most of the people who have to live in it. Individually there has developed a widespread feeling of helplessness and despair, in the face of what seems to be an overwhelming mass of disparate social forces, going beyond the control and even the comprehension of the human beings who are caught up in it.”

That was written in 1980, but it could well have been written today, and with even more force. Bohm’s work is about diagnosing the way in which this fragmented worldview has come about – and then working to make a change.

New ways to see the world

Following his identification of the deep roots of the problem, he went down to the foundations of science and its picture of the world as a mass of little particles, separate building blocks which have to be put together. He pointed out that there are other images for how the world is made – for instance a glass hologram.

A hologram is made by shining a laser light at an object and capturing the scattered light in a piece of glass. When we shine a light through the glass a three-dimensional image of the object appears. We might think that if we break up the glass, we would break up the image. But no, with a hologram, there is something strange and unexpected. When we break the glass, each fragment contains the complete outline of the original – not in perfect detail, and as we go to smaller and smaller pieces, the pattern becomes hazier and hazier; but it’s still there.

So a new way to picture the world, he says, could be holographically. Instead of thinking about many small bits as primary, we should think in the opposite way. What we see as separate fragments may all be aspects of a deeper pattern. A holographic picture starts with the unity of the whole – just the opposite of the picture of self-contained particles, the picture which Bohm says has led to our fragmented “Us and Them” worldview of today.

Why is this important? Because many things which science has difficulty in speaking about – such as life or mind or consciousness – are where form and pattern come to the fore rather than substance and where we may find deeper explanations if we move down from the explicate order to the deeper implicate one.

Matter and mind are interwoven, he says.

Another way of saying that is that everything material is also mental and everything mental is also material, but there are many more infinitely subtle levels of matter than we are aware of.”

A richer and deeper existence

So it’s a radical challenge to some of the more entrenched attitudes of today. But it’s coming from one of the finest physicists of his generation, who developed his ideas to tackle deep technical problems in difficult and demanding areas of fundamental physics. And it’s also an inspiration to many people who feel that science may have been too ready to speak of a Theory of Everything in which life and mind and human values are somehow secondary. Bohm is saying that the whole of existence is much richer and deeper than anything we can imagine, and that there is a huge new territory for science to explore.

And it’s a radical challenge to everyone, since it seems that we are becoming more and more locked into seeing the world from the perspective of our own particular group, rather like football supporters supporting their own team through thick and thin, regardless of its merits or lack of them.

We have to talk

And how do we do it? Bohm highlights the importance of dialogue, of people coming together around a table, working on ideas to seek for solutions. At first he says, people express fixed positions and tend to defend them, but if care is taken with the structure of the discussion, after a time a genuine free flow of meaning begins to take shape among the participants.

People are no longer primarily in opposition, nor can they be said to be interacting, rather they are participating in this pool of common meaning which is capable of constant development and change.”

In this way, he says, we may be able to move forward from rigid mental attitudes that are causing problems for us individually and globally. We need dialogue between East and West, North and South – “so that a truly planetary culture could come into being”.

And similarly, he says, a dialogue is needed between science, art and religion – “in which sooner or later they can all come into the ‘middle ground’ between them, which will make available a new order of operation of the mind with rich possibilities for creativity.”

He calls, in fact, for a new “creative surge” to take place in science, and in every aspect of human life.

Something along these lines must have taken place during the Renaissance in a radical transformation that included science, art, and a new view of humanity, culture and society. What is need today is a new surge that is similar to the energy generated during the Renaissance but even deeper and more extensive.”

He was a modest, gently-spoken man, who suffered ill-health and depression in his later years, and who died 25 years ago, but his aim was always to look ahead and seek ways to heal and repair and bring people together. Given the scope for conflict in the world today, it may be that the time has come for us all to study his ideas and act on them.