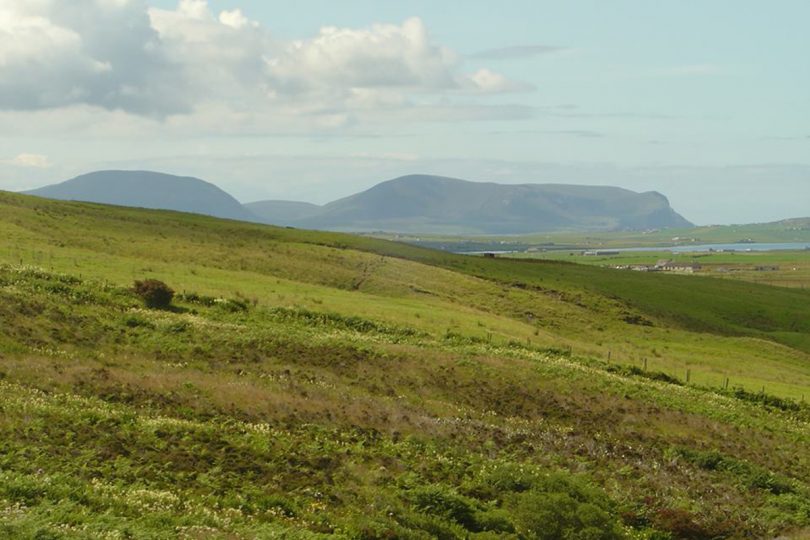 We cut a belated peatbank on the last Saturday of June. Our fuel is at varying stages, half of it long overdue for carting. This final cutting was bottom peat, bedded on clay; which came up on long black slabs where it was not tree-broken. With some difficulty a large root was levered out, a primeval hazel surrounded by its nut-shells. Deep down, the peat was pale amber and of a mossy texture. This layer had an ancient odour, and the cold of centuries struck my boots and gloves.

A new farm road is branching out, and the existing track over which we have driven so often now has an even base; gone are the deep ruts and mud holes we splashed and lurched through in the spring. Right in the digger’s path a few fragrant orchids rose, all innocent of their fate; we halted, and with a pocket knife and fingers probed down to dig them up. I planted them on my heathery lupin brae.

The sun blazed through a cooling westerly wind. We arrived home just as the phone rang to arrange a long-promised trip to the Hamars that afternoon.

Syradale has an air all of its own, appreciably milder than that of the open plain, except when a wind is funnelling up the valley. The west wind and a haze of cloud followed us. Wild pansies edged a field where cattle grazed; we passed another dressed in pink and gold, where ragged robin spread a close carpet of colour on one side and buttercups, in an extravagance of burnished yellow, lit the other half. Crossing the firm fence which divides the cultivation from the hill we found wild roses and ferns in the bed of a dry burn. Spider-webbed hollows made tiny traps in the damp turf. On the burnt hillside bracken rose in a pale green wave.

The fuchsia which runs down the Hamars increases yearly. Dripping with blossom, it hung in a canopy over the burn. The waterfall sprayed out from moss-brown rocks, singing in the shelter; ivy leaves shone and nettles stood guard, but a large heather-and-twig-built nest had been cast down into the burn. Rock faces wore generations of initials; a natural rockery crept, rooted in crevices; maidenhair, spleenwort, mountain willowherb, golden saxifrage, and that small, proudly branching plant which stands on the edge of a quite-inaccessible crag.

I can recall a March excursion to the Hamars of Syradale a good many years ago, when I found two-feet-long icicles in the burn, a sheeted waterfall, several robins, and a restless flashing brilliancy of migratory goldcrests in the leafless fuchsia. That day I sat entranced for an hour on a stone; such scenes come but seldom.

This summer day, in the shelter of an ivied overhang, a banded snail crept, drawing in its head at an approaching finger but presently extending its neck again, and warily waving its horns.

Bright pink and rose-like, a freak water avens appeared underfoot. This specimen’s petals were held upright, making of that habitually head-hanging and modest plant a flower to grace a garden; yet, if transplanted into a flower-bed, such mutations will bloom normally the next season.

Going farther up the valley we were pushed by the strengthening wind which had become trapped between the hills and was hastening to pour out over the plateau above. On the level hilltop half a gale blew. A West Mainland panorama stretched all around. Pale silver sea shone over Sandwick, and Hoy rose clearly above the Sound. Wideford Hill was spiked with matchsticks and Kirkwall clustered in its lee. Hellyar Holm Lighthouse gleamed white, Shapinsay was low and mistily green with the Castle rising from its dark pewter-coloured sea. Cattle gazed at us over a fence; we had reached the Rendall side of the hill.

A peat road led back to the upper reaches of the Syradale burn, where the fuchsias were not so tall; here, a year ago, we had seen a wood pigeon’s nest with its curious, vulture-like, half-fledged young. The hill dropped away alarmingly as we descended; the valley was wet-footed but pleasant to walk through because the July jungle was only beginning to rise. June is the most beautiful summer month, when low flowers colour the land before the rank vegetation takes over.

A rain-cloud broke as we reached the fields. The opulent purple orchids lining the roadway stood clean-washed, and the grass-blades shook themselves dry, as the shower took to the hills and we trod the hard road home.