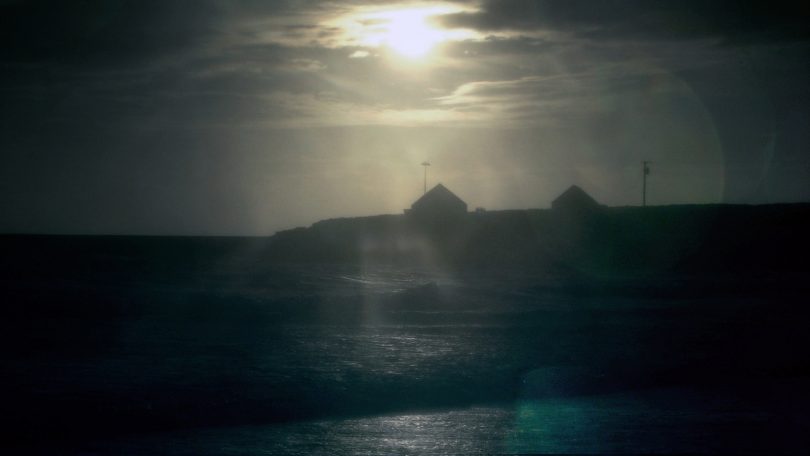 In the Seventies and Eighties we experienced dramatic and scary ball lightning here in the north end of North Ronaldsay. The most spectacular and potentially disastrous event happened during the most severe and violent thunderstorm I can remember. It was directly overhead, and the thunder and lightning were virtually simultaneous and occurring almost continuously. Blue forked lightning shot through the living-room many times, apparently through the window in a straight line yet the window did not break.

Our four children were very young, and I got them into the corner of the room furthest from the window, on to the floor behind the table. We had no mains electricity, just a Lister generator, but I pulled out all the plugs. Although it was only about two in the afternoon it was almost dark, apart from the lurid blue of the strikes.

My husband Tommy came in and was about to light the gas light which was not quite in the centre of the room, when a whirling ball of light, golden orange in colour, and about a foot in diameter, moving very fast, shot in from the direction of the window. It made no noise and there was no heat from it.   It hovered and was stationary for a few seconds beside the gas light, before turning at right angles and hurtling towards the Doric range where it exploded with such force that the house shook. The noise was incredible, and the smell of burning and sulphur filled the room. No trace was left, no scorching or marks of burning. Perhaps the copper in the gas light had attracted it.   Torrential rain followed the storm as it moved gradually away.

The house seemed undamaged, although the wall fixed telephone with its windup handle was live and rang continuously. As far as I remember every fuse in the local exchange blew. One of our neighbours who was here decided to walk home, and forked lightning was shooting round him. That day there was a violent storm on the Mainland, cars and vans struck and a lot of damage done. I read afterwards that a footballer in England had been struck and either injured or killed during a match.

The second time I experienced ball lightning was during a bitterly cold January. We had a family visiting us from Kent. I was standing in the kitchen cooking during a thunderstorm when a smaller sphere of lightning shot through and exploded with a loud bang just in front of me. It was scary but not on the scale of the first one.

We also had a fax melted during lightning, and modems and digi boxes destroyed, as well as two windows cracked, so at the first sound of thunder I am careful to unplug everything, including the phone line, but there have been few thunderstorms and no more dramatic events.

At the time of the first phenomenon which was clearly remembered by all of us, I was writing a column in The Scotsman, and discussed it. I was roundly told by a correspondent that there was no such thing as ball lightning, just vivid imaginations. This struck me as very funny, since having seen, smelt and heard something so bizarre, I wouldn’t like to experience another strike! Reading the research from Norway, China and elsewhere, it looks as though we were very lucky on both occasions not to have been injured or killed, or at the very least for the house to have gone on fire. I have no idea why no apparent damage was done, but the noise when they exploded was deafening, and I expected the wall behind the range to have been cracked.

The Hessdalen research seems to suggest that the Norwegian phenomena produce neither heat nor noise, and do not burn on contact. The ball lightning here was silent as it whirled through the room and stopped before changing direction. Only on impact was there noise. It will be interesting to find out what conclusions are reached about the causes, because ball lightning seems much more common than once supposed. I’d prefer to hear about it from a distance, though!