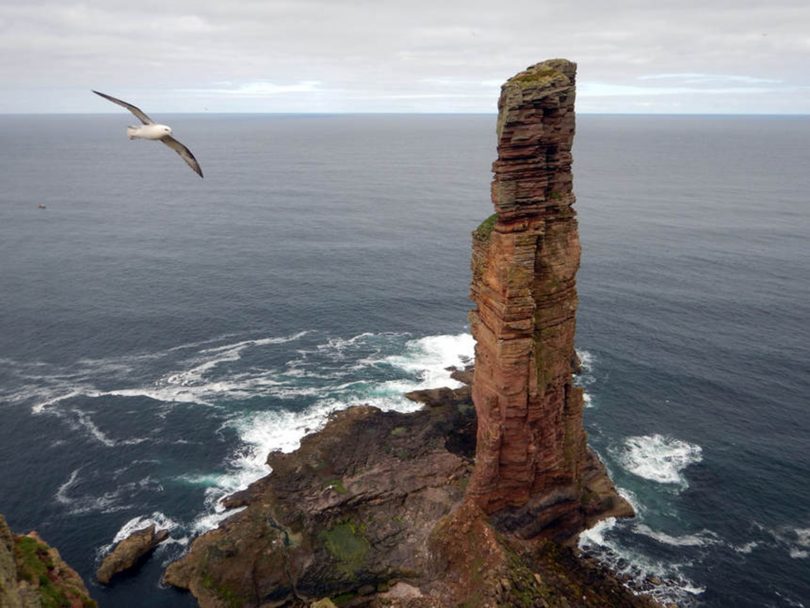 If you think you need to travel to far continents and foreign countries to find adventure you need to think again. To find wild, rugged landscape where very few people explore you don’t need to leave the UK. Just head north for about as far as you can go.
​
Think about the numbers; there are 10 million people living inside the M25, an area about the same size as the Isle of Skye on the West Coast of Scotland. In all of Scotland there are only 5.5 million people and 3.5 million of these people live in the central belt.

Around the coast of the far north of Scotland you are in for a rare treat. Endless sea cliffs with amazing rock in a wild landscape and with nobody else around for miles in any direction offering as much adventure as you’ll ever need. And then there’s the sea stacks to make it even more fun!

Ella, Dave and I went on a road trip along with Donald, Cathy and Alison to find the best sea stacks and sea cliff climbing on offer. For a warm up and shake down day to get attuned to the noise, the feel and the smell of sea cliffs we went to Sarclet close to Wick.

On the East Coast just south of John O’Groats the weather is pretty reliable and the rock is solid. Sarclet Pimpernel and Groove Armada require an abseil down to a small ledge and hanging belay just above the waves then amazing moves on solid rock back up. Only one dropped belay plate and one delicate dangle in the sea made it a successful day. We were ready for the first old man of the trip, the biggest old man in the country.

If you have to take a boat it’s going to be a good climb. We had to take two boats and a taxi to get to Rackwick bothy on Hoy, a small but welcome building made of the sandstone we hoped to climb, a building that seems to grow out of and be part of the boulder beach.

The swell on the sea and the heavy rain were not quite what we wanted though. The scale of the cliffs around the bay and crashing waves made it a very atmospheric place. Even the boulders on the beach are huge, like massive dinosaur eggs. It seemed that surfing might have been a better choice than rock climbing.

Coming to the crux

The next day was bright and breezy though and the rock dried out quickly. The crux corner of the Old Man of Hoy provides typically three-dimensional climbing with more pushing than pulling. Training at the climbing wall will not prepare you for this pitch, especially the 50-metre drop straight down to the boulders below.

Then it’s four more straightforward pitches to the top with minor route variations to avoid the nesting fulmars. It’s quite remarkable how much these birds hold in their stomachs ready to throw up at you in defence of their eggs. I didn’t expect it to be bright orange but I did expect it to be warm, oily and very smelly. Thankfully for us, Donald and Cathy got the worst of it so Ella, Dave and I got away with minor damage.​

It was nice enough for a few minutes’ contemplation on the top, watching the seals swim through clear water 135 metres below us. We waved at the folk on the ferry back to the mainland and started the abseils back down. A puffin came and stood on the top ledge a metre away from Cathy to check out what was going on. Its quizzical look appeared to say “you’re a strange looking bird. Why don’t you just fly down?”

Back at the bothy, couscous and satisfaction along with a little relief made for a fine meal and a sound night of sleep.

From Mike Pescod’s blog on the Abacus Mountain guides website.

Mike Pescod has been instructing mountaineering and mountain guiding in Britain and abroad since 1993. He has lived in Fort William, on the west coast of Scotland, since 1995 where he has climbed extensively and put up new routes in summer and winter. Scottish winter climbing and Alpinism are his strengths and he has made very successful expeditions to the Caucasus, Tadjikistan, Peru and East Africa.