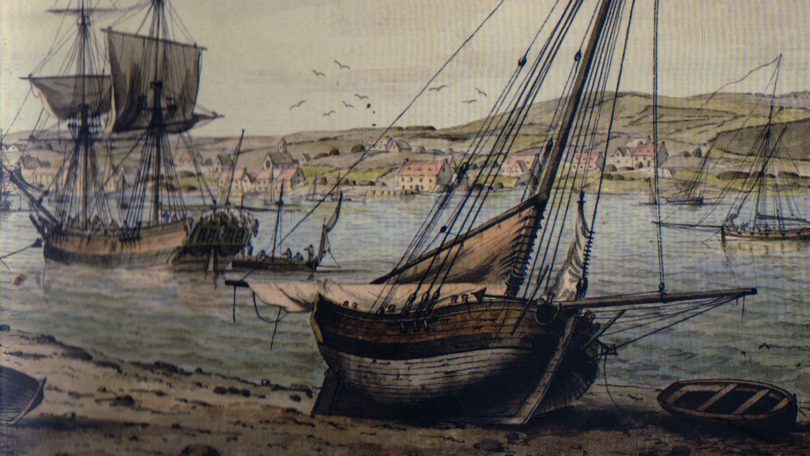 The first record of boat-building in Stromness dates from 1759; a long-running dispute over the ownership of a noust, between David Sutherland, shoemaker, and Thomas Linklatter, carpenter, came to a head when Linklatter built a boat on the site, blocking Sutherland’s access to the sea. By 1794, vessels of between 30 and 90 tons had been built in the village. Thomson and Moar, James and William Ward, and the Taits are named as boat- and ship-builders in the early years of the 19th century.

Business flagged after the Napoleonic Wars, but by 1821 the trade employed a total of 18 carpenters, and the blacksmiths of the town were fully employed in making nails.

The ship-broker Christian Robertson was well aware that, of the ships wrecked on Orkney’s rugged coastline, many were abandoned through the lack of a convenient repair yard. Taking advantage of the town’s recently acquired burgh status, in 1822 she sent to John Balfour MP a report recently prepared by Robert Stevenson, Engineer to the Convention of Scottish Burghs:

… the Reporter, in the course of his annual voyage as Engineer for the Commissioners of Northern Light-houses, touched at the bay and shipping town of Stromness … in the month of August last, having formerly made a nautical and trigometrical survey of that bay and anchorage, with a view to the erection or construction of a Graving or Dry Dock, for the repair of ships; he there met with Mrs Robertson & Son, proprietors of the Lands of Ness, where the Dock and Carpenters Yard are proposed to be established … the Reporter now submits the following as his report, regarding the advantages which might accrue to the public, and to the proprietors, from such an improvement in the Orkney Islands.”

Stevenson concluded that the building of a dry dock, at a cost of £8,215: 1s, would not be economic without a 50% grant from the Government; that in preference, a new type of carpenter’s slip, invented and patented by ‘Mr Morton, Carpenter of Leith’, would, at one fifth of the cost of a dry dock, be convenient for ships of 300 tons or more:

The bottom of this Slip is laid with a centre and two side-ways or tracks, which extend from the point of the lowest ebb of the tide on the adjoining beach along the whole extent of the Slip. These ways are inlaid with tracks upon the top, corresponding to a set of rollers in a moveable frame, on which the ship is placed. This frame is let down to low water mark, or even below it, when a ship is to be upon … this moveable frame, which is afterwards drawn out of the water … by means of a strong chain or hawser … acted upon by capstan or other contrivance, which may be wrought by men, horses, or steam …”

Presumably, John Balfour MP did not persuade the Government to grant-aid even the much less expensive carpenter’s slip. The Robertsons did not proceed, but, in 1829, a young entrepreneur, John Stanger, appeared on the scene and revived the project. He set up the Ness Shipbuilding Yard, and in 1836 he installed Morton’s Patent Slip:

Upon the south side of the harbour of Stromness, on the property of Ness, a patent slip, with the necessary apparatus, has been lately erected, capable of receiving a vessel of up to 400 or 500 tons. This is greatly needed, from the number of vessels which pass through the Pentland Firth and are often compelled to take refuge in the harbour and to obtain repairs which their disabled state requires. This slip was erected in April 1836, and in the course of the three succeeding years thirty vessels were received upon it and repaired, their tonnage being 3,368 tons.”

The great days of Stromness ship-building and repair now began. A series of brigs, sloops, schooners, smacks and ketches were built for local merchants and ship-owners and customers far beyond Orkney. In 1851, Stanger built what was perhaps his largest vessel, the three-masted barque Lady Franklin, of 400-420 tons, for Baker & Co. of Liverpool.

It was through John Stanger that the long-looked-for steam-driven Pentland Firth mail service at last came into being. From his patent slip, he launched a stout wooden-hulled ship, the Royal Mail. Fitted in the Tyne with engines and paddle wheels, she was in 1856 awarded the contract to carry the mails between Scrabster and Stromness.

The move to Coplands’ Dockyard

John Stanger retired in 1868 to run the now much-reduced agency of the Hudson’s Bay Company at Ness House, leaving the shipyard to the care of George and Peter Copland, whose father John had served him as foreman carpenter and overseer.

The Coplands built a series of schooners for Orkney and Caithness customers, then, on John Stanger’s death in 1878, they transferred carpenters and equipment to the eastern shore of Hamnavoe and set up Coplands’ Dockyard. Here they installed a slip with Orkney’s first steam-powered winch. Among the vessels produced on the Cairston Patent Slip were the Maggie, the Janet and the Mary Ann, for the general merchant J.A. Shearer.

In 1880 a young Faroese, Hans Jacob, was apprenticed ship’s carpenter at the Coplands’ dockyard. When there came a heavy snowfall, he made himself a pair of traditional Faroe ‘clogs’. The idea caught on, and soon clogs were commonplace. On these wooden skates with zinc runners, young folk sped down Hellihole and the Kirk Road, until motor transport and the gritting and salting of roads brought ‘clogging’ to an end.

The Ness Shipbuilding Yard was back in business and competing with the Coplands when Frederick Ward Stanger came home to reopen his father’s yard in 1882. Twenty-two years later he had it modernised, putting in a large engine for hauling up vessels, and installing power saws and other labour-saving equipment. He built two steam-powered herring drifters; Thule Rock for a customer in Shetland, and Pansy for owners in Wick. Before the First World War, Stanger acquired a contract to build Admiralty cutters, ‘and turned them out in a manner which gave complete satisfaction’.

During the first decade of the 20th century, the herring fishing, a major annual boost to trade in Stromness, was fast diminishing; and as ship construction increasingly turned from timber to iron, the Coplands’ dockyard closed its doors.

During the Great War, the yard served the Navy in Scapa Flow, but when it was over, there was deep recession, and little work for Fred Stanger. To keep his men employed, he built a ship of 250 tons, but on his death in 1924 it stood unfinished awaiting a buyer, and the business finally closed down.

After the Second World War, the Kirkwall-born artist Stanley Cursiter, director of the National Gallery of Scotland and King’s (later Queen’s) Painter and Limner in Scotland, converted Stanger’s disused shipyard to the house and garden of Stenigar. At low tide, amid shingle and seaweed, the dressed flagstone base of Morton’s Patent Slip is still to be seen.

Bryce Wilson’s new book Stromness: A History, telling the story of the town over 400 years, is published by The Orcadian Limited (Kirkwall Press).

It describes how the town’s superb natural harbour led to its growth in the days of sail, to service a major international shipping route.

There are accounts of the Hudson’s Bay Company, the Greenland whaling, the herring fishing, the impact of two World Wars, and the many varied and colourful people who are associated with the town.