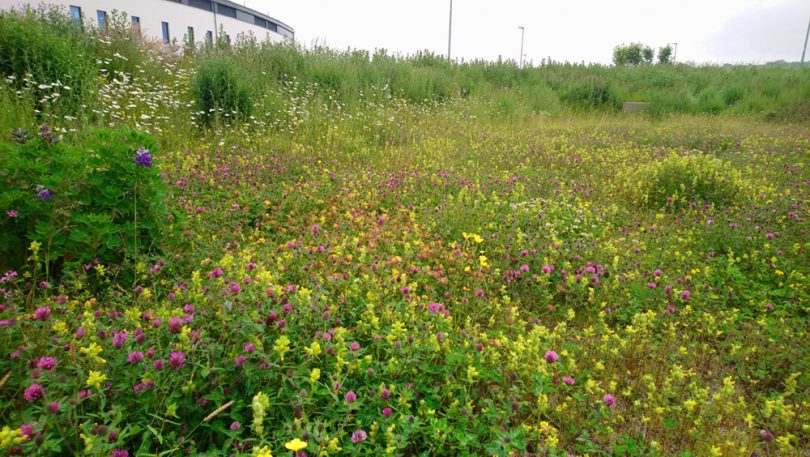 Creating a wildflower meadow is an effective way of encouraging more wildlife into your garden, by providing foraging habitat and cover for invertebrates and small mammals such as Orkney voles.

A wildflower meadow need not be large. In fact, it is often better to trial a small area at first and see what works best in your garden. Wildflowers generally grow more successfully in nutrient-poor soils where they are not out-competed by grasses.

Wildflower seed mixes can be sown directly into freshly tilled soil but one of the drawbacks of this method is that, when the soil is disturbed in certain environments, the buried seeds of species such as docks and thistles are often brought to the soil surface, where they quickly germinate once exposed to light. These are most easily controlled by removing by hand, as they appear.

Another option is to develop the meadow more slowly, by gradually reducing the nutrient level of the soil and creating conditions that will benefit flowering species rather than coarse grasses. During the first year, this process can be started by removing the clippings every time the grass is cut and avoiding the use of fertilisers.

After the final cut in September, it is best to scarify the grass, creating bare patches of soil, before introducing the seed of flowering species such as yellow rattle and selfheal – these are both semi-parasitic on grass and help reduce its vigour. Yellow rattle should always be sown in autumn as its seed depends upon exposure to cold winter temperatures to enable it to germinate the following spring. For this species it is also important to use fresh seed that has been harvested earlier in the summer. Selfheal may be sown in autumn or spring but germinates best in short grass.

During the following year, if the grass is growing vigorously, a high cut may be necessary around May, taking care to remove the clippings. For the remainder of the spring and summer, the meadow should be left uncut to allow the yellow rattle and selfheal to flower and set seed. This will help both species to establish more strongly and spread farther throughout the meadow area. Towards the end of September, the grass should be cut, and the clippings removed, to continue reducing soil fertility.

In subsequent years, as the yellow rattle and selfheal become more abundant, the grass should become thinner, creating more spaces for sowing seed of other species that are native to Orkney, e.g., red clover, devil’s bit scabious, ox-eye daisy, knapweed, meadow vetchling and red campion. This should be done when the soil is moist, in late spring or late summer, and the seeds trampled in to ensure they make good contact with the soil.

Another option at this stage is to grow wildflower plug plants from seed or cuttings in early spring, harden them off, and insert them into the developing meadow. Lady’s smock, also known as cuckoo flower, is most easily grown from cuttings. Again, it’s important to get plug plants into the ground when the soil is moist.

This method has the additional advantage of ensuring that certain plug plants can be inserted where they are more likely to grow well. The low-growing common bird’s foot trefoil tends to grow more successfully around drier edges where the grass is especially thin and sunlight can penetrate well. Other species such as water avens and meadowsweet prefer wetter areas.

If areas of tussocky grass persist, this is not a problem because, if left permanently uncut, they can provide ideal habitat for nesting or hibernating bumblebees. Tussocky grass also gives good cover for Orkney voles.

Once established, wildflower meadows should need very little maintenance, other than a single cut at the end of summer and the removal of unwanted weeds from time to time. Also, continuing to remove the clippings after mowing will help maintain low soil fertility and inhibit the development of coarse grasses.

The wildflower species mentioned here have been selected for their ability to provide a source of nectar and pollen from spring all the way through to late summer and early autumn. This is an important consideration as it means insect pollinators will have access to a plentiful food supply throughout their life cycle.

However, it’s also worth noting that the species assemblage in the meadow may well change over time if the conditions suit certain species better than others, and you might find that whilst some increase in abundance, others may become scarcer and may even disappear altogether. This is all part of the experience of creating and enjoying a wildflower meadow.

Eileen Summers works as Environment Officer at Orkney Islands Council, where she has a leading role in preparing and implementing the Orkney Local Biodiversity Action Plan. The current Plan includes a ‘Greenspace’ theme encouraging more nature-friendly planting in public spaces and private gardens, and highlighting various plant species particularly beneficial for wildlife. She has a degree in biological and earth sciences and an MSc in marine resource management.