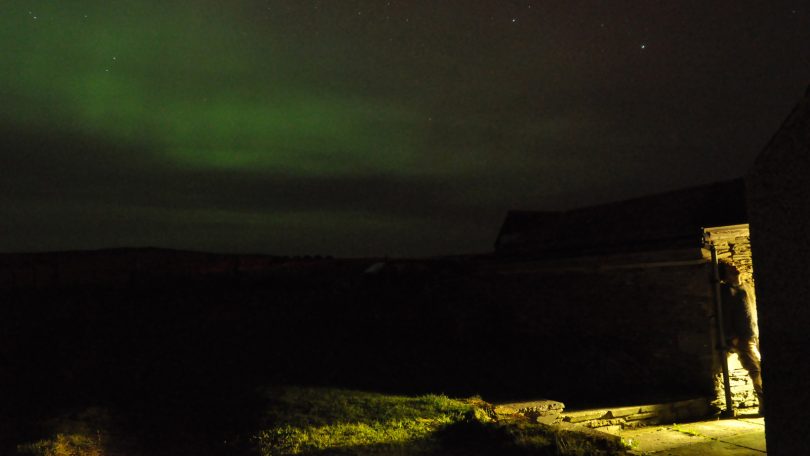 The ‘Sky Map’ app on my phone helps me to look in the right direction and, to the south west, Jupiter is shining while, to the south east, is Venus. I am fairly familiar with these – but just above, about one moon’s distance apart, is a more distant planet: Saturn.On Saturn, there is ringlight similar to our moonlight. On Venus, a day is longer than a year.  I hope to see Mercury rising from below the horizon at the same time, but low dark cloud obscures this area of the sky.

I go back to bed and from my bedroom window I see dark clouds move across Venus and Saturn. It is possible to do a fair amount of astronomy from my bed, no telescope or binoculars needed.  I hear the rain start and a cow waking up before I fall asleep again and later it’s as if it has been a dream: My early morning sleepwalk among the planets.

Last midwinter, soon after I returned to Orkney, I began for the first time to be interested in astronomy. The long winter nights up here, combined with the lack of light pollution and the open landscape, make it an ideal location for stargazing. Under certain conditions the Andromeda galaxy can be seen by the naked eye from the islands, something only possible in places with really dark skies.

The other night, instead of going to an AA meeting, I went to the first ever gathering of the Orkney Astronomical Society. I stopped drinking to do things, rather than to spend my time talking about stopping drinking, I reason. Instead, I’ve been on trips, on a freezing hillside after sunset, or sheltering from the wind behind one of the standing stones in the neolithic circle of Brodgar, looking at the canopy of night sky over the low hills and black lochs. My astronomy stance: head back, mouth open, getting dizzy.

In mid-December each year – while we’re at Christmas shopping or at parties – the earth passes through a cloud of debris left an asteroid called 3200 Phaethon. When tiny pieces of dust and ice from this cloud hit the earth’s atmosphere, at around 134,000mph, they burn up to create what we know as ‘shooting stars’, but of course aren’t stars at all. Meteoroids are outside the earth’s atmosphere, meteors are what we see as ‘shooting stars’, ‘ablating’ as they collide with the atmosphere. Meteorites are bodies that actually reach the earth’s surface.

For a couple of nights I went out alone late at night last winter, looking for shooting stars: the Geminid meteor shower. It was too cloudy to see any but I liked being out late in the cold, acting suspiciously, stunningly sober. But the next year, on Papay, around 11:30pm, I took a chair into the garden and some blankets into the garden, lean back and fill my gaze with sky. There was no moon to pollute the view of the stars and it is a beautifully clear night – the milky way stretching out over my house.

In half an hour I see 19 meteors, leaving streaks of brilliant light for just a second. The meteors are different sizes and brightnesses – including one so bright and low in the sky it made me go ‘whoa’ out loud – but all are tantalizingly brief.

The few lights of the house on the island and I listen to its sounds: cows mooing, occasional dog bark but mainly the sea. The sea sounds different on either side of the island: on the east, where the the north sea meets the beach, it was a crackling crashing, on the west, where the Atlantic reaches rocks and cliffs, a thundery rumble. The notes and instruments of the oceans and shore create an endless harmony.

Quickly, clouds move to obscure the area of visible stars and the sky is once again completely dark. When I get inside it’s raining heavily.

With my wellies heavy on the ground, I’m building a picture of where I am: on earth, travelling, and what the moon, sun, stars are doing out there. The old folk on Papay used to always know what stage the moon was at, to know if it was light enough for to walk home by. I’m thinking about how the seasons and the years happen and how my personal anatomy affects my experience of it; developing spatial awareness on an astronomical scale, pushing my brain out; learning new and pleasing information like that there are three stages of twilight: civil, nautical and astronomical. Nautical twilight ends when the sea is no longer distinguishable from the sky and navigation via the horizon at sea becomes impossible.

In Orkney, stargazing is not possible in the summer. ‘Astronomical twilight’ – when there is too much scattered sunlight in the Earth’s upper atmosphere to do any serious deep sky astronomy – is present all night between April 24 and August 18. Stargazing is something special for the winter, I think, while realising that it is only because the earth’s axis is tilted by 23 degrees that there are seasons at all.

I hear about how peripheral vision is best for looking into the far distance, so sometimes when you look at an object directly it can disappear. And about just why the stars appear to twinkle (it’s because of atmospheric turbulence around the earth disturbing the travelling light). I am failing to resist the temptation to treat these things as metaphors.

There are four freckles in the shape of a parallelogram on my wrist and now I can see that they resemble the constellation Gemini. I think about how the moon is getting further away from the earth and although this is only happening at about 3.78cm per year, or the same speed at which our fingernails grow, it seems terribly sad.

My life has changed in the last few years. I’ve swapped disco lights for celestial lights and maybe it’s not so bad.