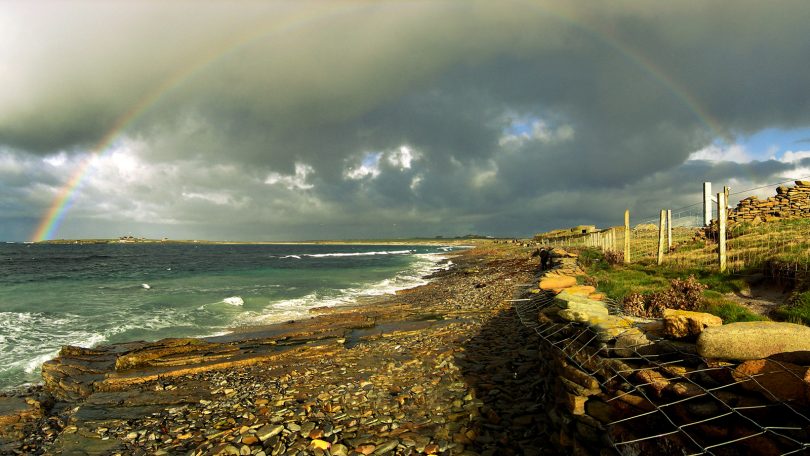 Kathleen Scott was one of the rocks on which a community is built. She did what was right and she did it with care.

She was born at Cruesbreck in North Ronaldsay on 11 September 1945, fourth of a family of six children. First were Sinclair, Ian and Ann, and later younger brothers Walter and Norman.

Their father Sydney was the island’s miller, and a fine builder in stone whose work can be seen at places like Antabreck, where the family moved in 1948. Their mother Bethia played the organ in the New Kirk for over 60 years.

The children helped their parents, and when Sydney was the roadman there was gravel to shovel and potholes to fill. Almost every summer evening Kathleen, Ian and Ann would be down at the shore at a natural swimming pool called the Grey Stane Pou. Nouster Bay was another favourite area. Wartime gasmasks with the air filter blocked provided an early means of underwater exploration, and they graduated to proper masks and flippers.

Later Kathleen would learn subaqua skills in Dundee and dive in North Ronaldsay with the team exploring the remains of the Swedish ship Svecia, wrecked on the Reef Dyke in 1740. But first there was secondary education at Kirkwall Grammar School and study at Aberdeen University, where she graduated MA with English and history her two main subjects.

Her long flowing red hair, whose ripples shone and sparkled in the sun, mesmerised us as children and that is how I always see her in my mind’s eye,” recalls a cousin who lived in Aberdeen, and as a child was babysat by Kathleen from time to time. “The wonderful stories she read to us from a huge book she bought, just for those evenings – will never be forgotten.”

She completed her teacher training at Aberdeen College of Education and her first posting was in Mintlaw, Aberdeenshire, in 1968. Three years later, she moved to Linlathen High School in Dundee.

She was in Dundee for twenty-five years, at one stage being seconded to take a certificate in youth and community work. She became Principal of Guidance at Linlathen, a demanding post where she earned great respect and affection.

She made history interesting and exciting,” says one former pupil. “I went back to uni as a mature student to study for an MA Hons in history with her very much in my thoughts. She was a kind happy person as well as a fantastic teacher.”

She was a formidable lady, and a superb teacher,” says another. “I remember her words, ‘You’ll never pass your 6th year studies if you spend your lunchtime in the pub.’ I did pass and it was for Kate.”

“Always firm but fair,” says another, and there are memories of her accompanying them on school skiing trips to Glenshee, and how she stood up for one pupil who was being put under pressure by another teacher.

She was fiercely protective of those pupils in her guidance cohort and passionate about history and how it affects the future,” says one former colleague. “She had a lasting effect on the lives of many young people.”

Principled people like her,” says another colleague, “make a difference in the world.”

She carried her commitment for the community into her own time, working with groups campaigning on social issues.

In Dundee too she became part of a group involved in the restoration of fishing vessels, among them the Reaper, a traditional Fifie purchased by the Scottish Fisheries Museum in Anstruther. She was particularly involved in the restoration of the Isabella Fortuna, also a Fifie, built in Arbroath in 1890 and fished by the same family for over eighty years. Kathleen was in charge of the restoration of the Kelvin engine and she put in many hours of work and acquired new skills. She studied for a certificate in coastal navigation and sailed with the boat to Portsoy and on to North Ronaldsay and down the west coast of Scotland.

She loved every aspect of ships and the sea, and on one occasion on the old Earl Sigurd’s journey to North Ronaldsay was allowed to go down below and fire up the boiler for the whole trip, shovelling the coal into the furnace under the watchful eye of Jock Harcus.

In 1996, after twenty-eight years of teaching, she took early retirement to move back to North Ronaldsay to help her parents, now ageing, and her brother Walter who was in declining health.

In 1999 she took over from her father as shipping agent, continuing to this year. It was work of which she was so proud, much appreciated by the shipping company, with everything done to the exacting standards that she always set herself. She had a first-class working relationship with master and crews, efficiently supervising arrangements on the pier. She once informed an amused skipper, in response to a comment from the bridge, that he might be captain on the ship but she was in charge on the pier.

Whatever she did, she did with energy and commitment. As clerk to the North Ronaldsay Community Council for seventeen years, each detail in her minutes was thought through and written with precision. She took on with the same commitment the work of secretary of the Community Association and latterly as interim secretary to the North Ronaldsay Trust.

The outcome of one project which she led can be enjoyed by every visitor to the island, through the archives at the New Kirk. With photographs and descriptions of people and boats and harvest fields, it is an opportunity to step back through time into another world, a delight for visitors and local people alight.

She loved all animals, and particularly horses, and went to riding school as a student in Aberdeen, winning prizes. She had two Highland ponies and had a dream of working traditionally with horses and machinery on the land. At South Ness she grew potatoes and made hay. As time went on, it became clear that this would be something for another generation to tackle, and just at the turn of the year she was able to move house to Breckan and enjoy the comfort of living there, though sadly for such a short time.

But another of her dreams is taking shape, with steady progress towards North Ronaldsay to achieve official recognition for its dark skies. She worked tirelessly, assisting the lighting audit and organising numerous successful visits of speakers to North Ronaldsay along with two night sky photography competitions and a full-scale astronomy weekend. Through the foundations she laid, the formal application will now go forward this spring. In recognition of her work she was appointed vice-chair of the British Science Association’s northern branch covering the Orkney, Moray and Highland area.

The terminal diagnosis made her determined to use her time to the fullest. She loved reading and listening to the radio – to books and plays and world news and history. She also loved traditional folk music and song.

And,” say her family, “we will not easily forget Kathleen really dancing away in great form with amazing energy at the end of August last year at the 80th birthday party of five North Ronaldsay ladies who had been at the achool together. She was really in top form that whole night.”

She was outspoken, dogged, with a heart of gold, and one of the kindest people I ever knew who’d do anything for anyone,” says one fellow-islander. “She had the knack of making one feel comfortable in her company,” says one cousin. “Her profanities were legend but her wit was equally so.”

A wonderful strong person who fought for what she believed in and stood up for her beliefs and the rights of others,” says another cousin. “We loved her dearly though we weren’t allowed to say it.”

Over eighty people attended the funeral with many coming out by plane and on the Earl Sigurd. Four of the crew, along with two local dockers, acted as pallbearers for the second-last lift. A fine sunny winter’s day gradually faded away into a brilliantly beautiful starry night, and so many memories remain of someone who as friend, relative, teacher or co-worker was one of the finest and truest people that anyone could wish to know.

The original of this appeared in The Orcadian of 9 February 2017.