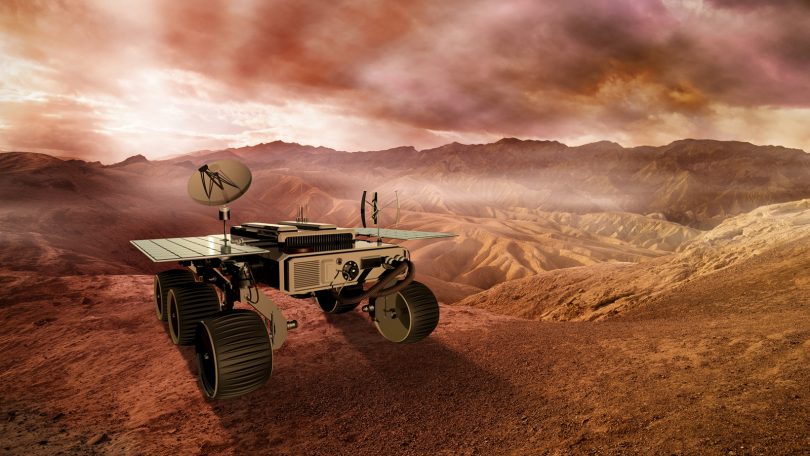 The original vision of space exploration was highlighted by visionaries like Arthur C. Clarke. The vital first step, he explained, would be to build a docking station in orbit around the Earth. That would be the Earth’s terminal for journeys to the Moon and Mars and beyond. Supplies and fuel and crews would then be carried up to it by a shuttle service of simpler spacecraft.

The reason for this system is because of the nature of orbiting satellites. The downward pull of Earth’s gravity is balanced by the impetus of the satellite’s circular motion, an impetus that is never lost as at that airless height there is no atmospheric friction to slow it down. All the hard work of lifting up from the surface of the Earth has been done and the spacecraft can then load up with fuel and supplies and crew for the planetary long-haul. [/two_third]

But that essential infrastructure has never been put in place. Instead travel to the Moon or Mars involves a three-stage rocket system, with the first two stages burning up and falling into the sea.

This is a very expensive way of doing things, and until it’s solved space travel will consist of single expeditions. But solutions are on the way. This is the significance of SpaceX’s Falcon rocket landing on a sea platform, opening the way to cheaper reusable rockets to lift material into orbit. It is also the rationale of the Skylon rocketplane, planned to fly direct into orbit. Ordinary aircraft need oxygen to burn their fuel and so cannot fly in space. Skylon’s Sabre engine can switch between the atmosphere and space, through a remarkable system which liquefies oxygen almost instantaneously. It’s being developed by Reaction Engines Ltd in Oxfordshire. If all continues to go well, the Sabre engine could not only open up the vital first step into space but also revolutionise air travel.

If there can be a simple way to get material into orbit, and even to fly up direct, then it will be possible to build a docking station, and from there to have frequent enough journeys to the Moon to build a lunar base, and similarly with Mars, and the moons of Jupiter and Saturn.

The possibilities are immense. We now know that life can survive in the very harshest conditions here on Earth, and that organic molecules can form on dust clouds in the dark and cold of space. It could be that life is not simply a happenstance on one isolated planet but some deep-seated feature of the universe. What – or who – we may find out as we go outwards through the Solar System may be bacteria and lichens, or something beyond imagination. We will only know when we go and look.

And to do this is in our deepest nature, for humans are explorers and without the opportunity to explore we are like sailors without the sea. Bruce Chatwin wrote in The Songlines of the great routes across Australia where its ancient people could travel from one end of the continent to the other, and the terrible consequences when people who are natural explorers are confined to pockets of land.

Darwin quotes the example of Audubon’s goose, which, deprived of its pinion feathers, started to walk the journey on foot. He then goes on to describe the sufferings of a bird, penned up at the season of its migration, which would flail its wings and bloody its breast against the bars of its cage.”

And that’s our situation in the world today. It’s in us to seek the unknown, and we keep trying to find it on however small the scale we are confined to, whether we bet on chances or surf the web, whether we seek it through money or conflict.

But deep down like Audubon’s goose we feel something calling, and new opportunities and challenges in space exploration may help us on Earth to turn our energies outward into a quest for fresh beginnings.

Pictures from the Red Planet

And the images from Mars make it look so close. It’s little more than seven months since the InSight lander touched down on Mars and unfurled an array of solar panels, and mission control in Pasadena began preparations to deploy a robot arm to photograph the terrain.

The main task of InSight is to study the Red Planet’s deep interior, and part of its work is to drill into the surface and deploy instruments to measure seismic effects and heat flow. These may provide clues to the nature of the planet’s core and how it was formed. But the pictures from the surface will haunt us.

This is the eighth landing, and over the years pictures of Mars have been coming through from the little Mars rovers. We’ve been able to see plains of broken stone with rounded hills behind, drifts of red dust on broken rock, cliffs and crests of ridges – and it all looks so close that we feel we could be walking on it, feeling the scrunch of the sand beneath our feet amidst the dull glow of the Martian day.

And there is an indirect Scottish connection. The signals from the InSight lander are being relayed to us on Earth via two small satellites, brought on the same rocket and placed in orbit around the Red Planet. The satellites are of the CubeSat design – a modular system of 10-centimetre units, aimed to do for satellites what PC did for computing. Many CubeSats have been made by university students, and dozens have been launched into Earth orbit for tasks like environmental monitoring. The Mars satellites are formed out of six of the standard cubes.

Scotland is a leader in the field of CubeSats, particularly through Clyde Space in Glasgow whose satellite systems are exported around the world. The River Clyde, the company say, once built 25% of all of the world’s ships. “At Clyde Space, our romantic vision is for one day this to be true for spaceships.”

Across Scotland there is a range of companies providing skills and expertise for satellites and space communication, and plans to provide a missing component for the the UK’s space industry, its own launch facilities. Satellites are in ever-greater demand, for monitoring environment and crops and climate, and the technology to take them up into orbit will also help a new generation of spacecraft to develop.

And if the satellite builders and the rocket engineers succeed to their fullest, then a new generation will be able to dream of seeing at first hand sunlight spilling over the mountains of the Moon and the sand on the red ridges of Mars.