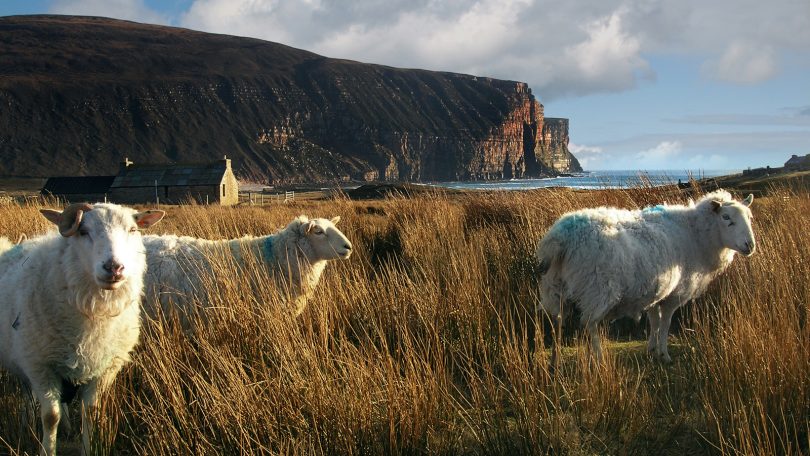 The North of Hoy is home to beautiful and different scenery to anything on offer on the rest of Orkney. There is no escaping the Hoy Hills as they dominate the skyline as the tallest point in both Orkney and Shetland – although the highest point (the Ward Hill) is only a mere 479 metres. The Hoy Hills were shaped by glaciers in the last ice age but depending on what source you prefer they may have been formed from the teeth of the Stoorworm. My first ascent of the Ward Hill was also my first – literal – hands-on experiences with nature. While the dog had already ran to the top we were fascinated at the heathery lower slopes which are home to Common Toads – which at the time easily filled my cupped hands. Golden Eagles became extinct in Orkney due to hunting but the majestic giants are slowly returning even if it is still a rare sighting.

The top of the hill is decorated in wind stripes and sandstone scars from thousands of years of lashing wind and frost action. When the clouds clear away you can see across Hoy Sound to Stromness and the flat, green meadows in the north. Where the hills flatten out into the sea at Moaness there are the sandy bays of Quoys and Creekland. Although these beaches often look like they are 50° further north than they ought to be with cream-coloured sands and turquoise waters they are simply over shadowed by Rackwick Bay. Locals often comment on Rackwick’s bizarre microclimate which is usually the complete opposite of the rest of the county. This means that for most of the time Rackwick has a Mediterranean climate. The reason for this has not been thoroughly investigated but Rackwick Bay is sheltered from incoming weather systems from the Atlantic by the highest vertical sea cliff in the UK – St John’s Head and any polar winds from the north are well sheltered by those Hoy Hills.

Rackwick Bay was once much longer than it is today due to longshore drift which is caused by the sea waves moving grains of sand along the beach at an angle. Rackwick Bay is sheltered by more sandstone sea cliffs which act to catch the sand moving in their direction. These sea cliffs are home to numerous birds: puffins, fulmars and black-backed gulls that sit and watch several herds of common and grey seals around the bay. Killer Whales are also spotted in the bay throughout the year having resident and transient pods causing fear to the seal population but fascination to other crowds.

Orkney is not famous for its woodlands but as with the rest of the Hoy landscape and elsewhere in Orkney – Hoy is different. For having barely any trees whatsoever – let alone native woodlands – Hoy is actually home to the most northerly ancient woodland – meaning it has existed continually since 1750. However studies suggest forests similar to this covered Orkney around 7000 years ago. Berriedale Wood is another example of Hoy’s varied assembly of pristine landscapes. It is the only place in the islands you will find a natural canopy of hazel, rowan, aspen and willow covers a bed of heather, ferns and even roses.

It would not surprise me is there were actually more species of bird on Hoy then there were permanent residents. Every year hundreds of ornithologists travel on a pilgrimage to Hoy to enjoy the wealth of winged residents. The official RSBP reserve is surrounding the Sandy Loch which is along the walking path to Rackwick Bay however the whole island is dominated by birds. Most of the bird species on the island are viewed for their grace and beauty such as the peregrine falcon, puffin and red-throated diver but there is one species that has both locals and visitors bemused. Locally known as Bonxies, the Great Skua is known to dive bomb anyone walking near the proximity of their nests – and Hoy alone has around 12% of the world’s population, so watch your head!

Over the years, our cottage in Hoy became a bit of a graveyard for cars as my parents’ inability to throw anything out progressed beyond the boundaries of the house walls. As a child my favourite car was our tough Soviet Lada Cossack 4×4 which was white with black zebra stripes. Every time I got in it I felt like we were about to embark on an epic adventure deep into the rainforest. The thing didn’t even have seats in the back but it was so full of things that it wasn’t much of a problem and we didn’t mind cuddling up to the dog. More so it reminds me of my real childhood, the one before computers appeared. The one that instantly makes you remember the smell of mud in your hair and when car journeys really did seem to take a lifetime.

Rose is entering her final year in Biology at the University of Dundee but has interests from Aviation to Zoology. Anyone who knows her will say that she can never stay still and always has an adventure planned.