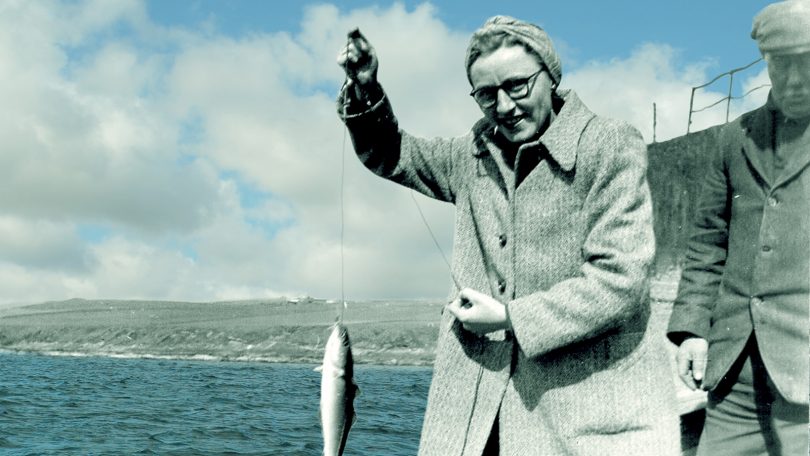 Through the 20th century the only commercial fishery in Graemsay was lobster, along with the occasional halibut or skate. In the main, whitefish and partan (edible crab) were for the table.

The following is from my personal memory, from about 1944, when I spent much of my annual summer holiday round Windywaas and Garson and on the sea.

The Wilsons of Garson and Quoys, Ritch of Windywaas and Danny Sutherland of Sandside, all fished from the bay. Jock Skinner of Quoys lived in Newhaven, on the Forth, but kept a small motor boat at Quoys’ noust for holiday fishing.

Jimmack Linklater and his son George fished from Cooper’s Noust. The Wilsons of Windbreak, Hughie Ritch of Scarataing, the Lyons of the Clett, Harry Skinner of the New’se and Frank Davidson of Gorn fished the East Side, Sowiskerry and Burra Sound.

The Leasks of Veval and Sinclairs of Dean must also have had boats at the east side and at Kirk Geo though I don’t have any memory of that. Jimmack Sinclair was old but his son Jimmy was still a young man still living at home in the forties, before he became a lightkeeper. Jimmy’s brother-in-law, James Leask jnr, lived in Southampton but kept a dinghy at Kirk Geo for fishing during his holidays. When Bill Skinner of the Cott came home from Australia in the forties he kept a dinghy on Burra Sound.

Robbie Mowatt of The Hill fished lobsters from a rowing dinghy in Burra Sound, and Billy and Ronnie Mowat of Ramray had a boat at Skaefea, on Burra Sound, which they moved to the bay when the Quoys folk retired to Stromness about 1950. When Jock Seatter came to Sandside in the fifties he kept a boat there but I don’t think he fished commercially.

A common evening activity in the summer months was the ly’e (lythe or pollack) fishing. They were caught by trailing lines behind the boat in rocky inshore locations. Favoured places were the Teen o Sandside, the Ber (that reef that lies across the mouth of the bay), and the Lash, close to the shore below Garson. Then inside Clettack Skerry and westwards past Fouligeo, round the Point o Ree to Cruik and a little further afield at the Bow Rock, off Selwick in Hoy, or close in round the Green Nose near The Bring, also in Hoy.

Swirdacks, young eels, were used as live bait for the hooks. Catching swirdacks was more exciting than fishing for they were fast, slippery and supremely camouflaged, looking like a bit of seaweed. They were caught where they migrated from the sea to the burn, lurking under stones on the beach where the fresh water spread out towards the sea. When the stone was lifted the eel made off like lightning, so you had to be quick, gripping it firmly between the thumb and the open blade of a pocket knife.

Baiting the hook was a barbaric procedure, though it was not considered so at the time. The sizeable hook was passed down the eel’s mouth as far as it would go, then out through its belly. The lips were then bound round the head of the hook with a piece of thin twine … little wonder it squirmed!

John Henry Wilson of Quoys stored his eels in a small keep-box moored in the shallows at the end of the pier. Around 1950 the introduction of rubber eels in the tackle shops ended this practice.

When the ly’e is hooked open-mouthed you know you’ve caught a fish for it is a dead-weight. The other dead-weight occurs when accidentally hooking the bottom and you know instantly for there is little “give” in the line.

On hearing the shout “Buddom!” the other fishers would haul in their lines as quickly as possible, the helmsman steering round in a wide circle to run back over the location of the fouled hook. Then, by tugging randomly in different directions the hook would usually be freed … great lamentations if the lead was lost as well as the hook.

Young ly’e were eaten fresh for dinner the next day but adult fish were not considered so good fresh. They were split, salted, and dried for winter consumption. The little white worms that sometimes infested them added to the protein content of the meal! 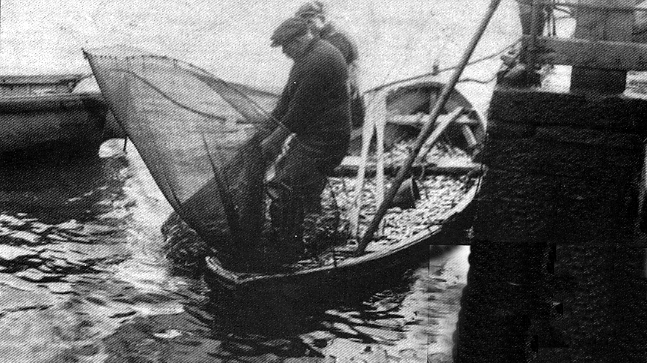 Sillocks and cuithes were caught for the table and used as creel bait. In earlier times when they were more abundant they were also used as fertiliser for the land. Dried sillocks were considered a bit of a delicacy as a snack. They were lightly dusted with salt, riven on to a wire rod, and hung on the end of the house to dry – flies all round them. To cook they were toasted on a fork in front of the fire.

The traditional catching method was to use a sillock-wand – a bamboo cane about seven feet long with a tome or line of the same length attached. The tome had a short piece of gut at its business end, with two hooks. The hooks were tied with home-made flies fashioned from the white part of a gull’s wing feather. The flies floated on the surface and were towed behind the rowing-boat on the edge of the tide.

In the grimlings of a summer evening the fish would rise to take the hooks and they were caught this way in large numbers. When the wand was raised high in the air the fish would swing inboard at just the right height for catching in the free hand. They were commonly caught in pairs and counted by the score, two or three score being a common evening’s catch.

We then started catching from the motorboat, thrusting the wand deep into the water so that the hooks were towed at a depth. This was very effective, especially during daylight hours. The natural progression from this was to try the mackerel cast from a drifting boat and the wands fell out of use. A cast consisted of six or nine hooks with fancy-coloured flies and a lead weight on the bottom end.

Now cuithes could be caught at any time of day and in locations never tried before. A favoured place was in Burra Sound when the ebb tide created a large eddy on the west side of the blockship Inverlane. Though I fished there many times it was a dangerous place and I never felt at ease.

We usually tied up to the wreck but I recall my father, Isaac, stopping the engine and rowing in the eddy with the tide roaring past at 12 knots on both sides of us. It was an exciting trip home too, riding on the edge of the standing waves of the tide-rip, with the boat almost airborne at times. They never could risk that in the days of sail.