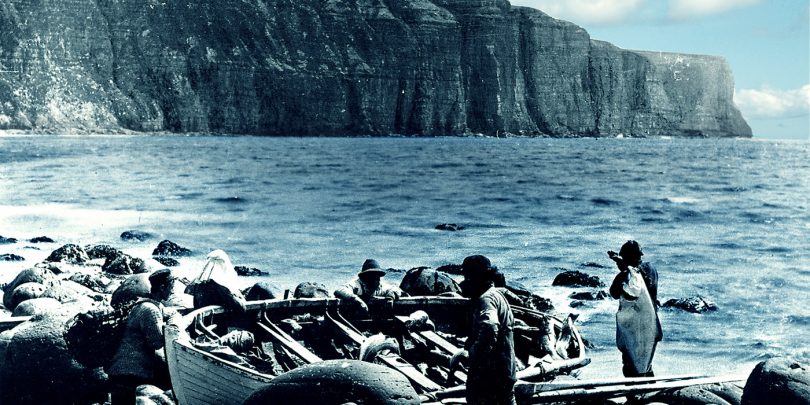 Mackerel congregate round the Sand Eel with the ebb tide. The boat is allowed to drift with the tide and the cast, described above, is dropped to the bottom then hauled up about a fathom.

They are voracious feeders so when you come on a shoal it gets a bit frantic, landing up to six or more fish at a time. On one occasion the shoal rose suddenly to the surface frantically grabbing the hooks on the way. The cause was soon apparent when the dogfish chasing them appeared. As quick as a flash Charlie Davidson grabbed one of the dogs by the tail and swung it inboard. Dogfish were not commonly eaten but never discarded.   The Wilsons of Garson salted and dried them for the larder.

Haddock, cod and ling were the favoured fish for the table, in that order. The main fishing ground was from around the Kame of Hoy down to Rora Head. They were eaten fresh, of course, but mainly split, salted and dried.

They were caught on a 30-fathom hand-line with a sprole attached. The sprole was a rigid steel bow about 20 inches long, with a lead weight at its centre and a single hook suspended from each end. The hooks were usually baited with limpets but mussels or lugworm could also be used. When using mussels they were wrapped with a little sheep’s wool to help keep them intact.

Nets were knitted on winter evenings for catching sea trout and the occasional salmon. This kind of fishing was illegal but nobody paid any regard to that.

The net had a one and a half inch mesh, i.e. when stretched tight, corner to corner, it measured an inch and a half. It was about eight fathoms long with the top edge supported by a line of cork floats, and about four feet deep. A series of loops along the bottom edge were used to secure beach stone weights, with a large anchor stone at each end.

The net was set at night at low water. It was usually set from a boat but could be set by wading from the beach. Small fish could pass right through but fish from about three quarters of a pound upwards were snagged by the gills. The net had to be inspected before the next low water or the crabs and gulls would destroy the catch. Occasionally a seal would get caught and leave a gaping hole in the net.

Danny Sutherland of Sandside, John Henry Wilson of Quoys, and the Wilsons of Garson regularly set nets in the bay. They were providing luxury food for the table, but in his youth James Wilson of Garson and his father were known to smuggle the odd trout or salmon (gentry, he called them) into the Stromness Hotel.

Lobsters, also referred to as gentry, were the cash crop but were occasionally eaten for a special treat. There was no ready market for the by-catch, partans (edible crab), so they were always for home consumption. Despite the hardships of the day Graemsay folk did in many respects live well.

Between the two world wars lobsters were so plentiful that James Wilson jnr of  Garson bought his first tractor, a Fordson, with lobster money. It may have been the first tractor on the island.

The creels were constructed during the long winter evenings and dipped in hot tar to preserve them. An oil barrel halved end to end was placed over a fire to heat the tar and the creel dipped in it.

They were set with individual buoy-ropes. The rope had a series of small cork floats lashed to it at about 20-inch intervals with a larger “dipper” attached to the end. The dipper was painted in different colours to identify the owner. For ease of hauling and the ability to see the bottom more easily and select a suitable hole for setting, creels were hauled and set starting with the last hour of the ebb.

The buoy-ropes streamed with the little tide that was running so the boat approached the line of creels from down-tide, ie motoring against the tide. Approaching with the creel on the port side of the boat, the buoy-rope was hooked as it started to descend to the creel and hauled by hand, leaving the buoyed end of the rope to trail in the water.  As the boat began to overtake the creel the helm was put hard over, turning the boat to port, to circle continuously until the creel had been dealt with and was freshly baited.

Traditionally, the rope was attached to the top rung of the creel. James Wilson snr of Flaghill and later Garson, always the innovator, was credited with attaching it to the corner of the creel base so that it planed to the surface under the tow of the boat and was much easier to haul.

With lobster and partans removed, inedible crabs in the creel were crushed with the butt-end of the hook, for they would just eat the bait. This was the fate too of the “Willie Mowats” or velvet crabs. Ironically they are now fished for the Japanese market.

On the return trip the lobsters’ claws were bound with thin white twine to prevent them fighting with each other. They were then stored in the lapster-kist, a heavily tarred wooden chest floating at a mooring close to the shore. Once a week they were transported to Stromness for the bus to Kirkwall and onward shipment to Billingsgate. In an earlier age Rob o’ Scarataing tethered his lobsters to stones in a rock pool which was accessible at low water.

Lobsters could also be caught in the ebb. Ancient hidey-holes were constructed by placing an extremely heavy slab across a niche in the rocks. These holes were always covered at the lowest ebb. Lobsters would hide in them to cast their shells. There were several of these holes round The Lash, and I recall removing two lobsters on one occasion. Being soft they couldn’t go to the market so we had a feast that day. 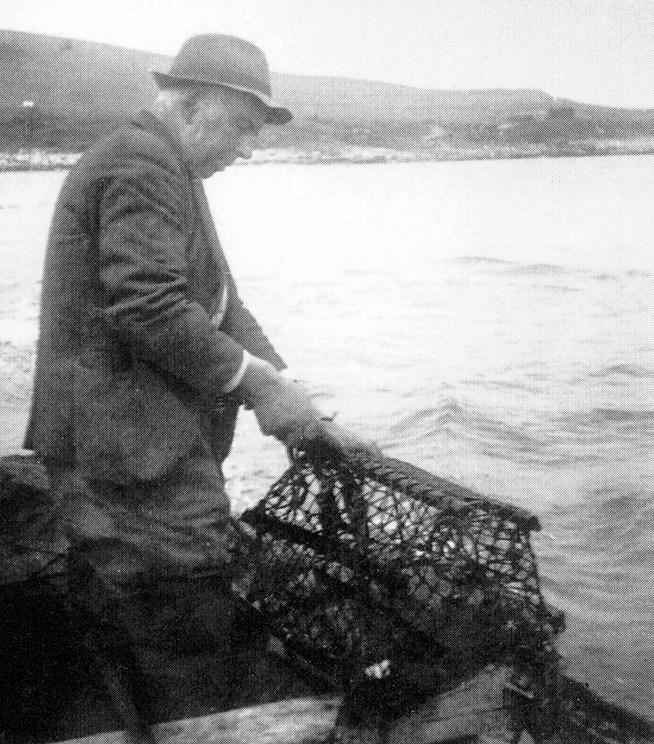 James Wilson and his cousin Georgie Ritch fished in partnership and would expect to get at least half a dozen lobsters and a few partans for the pot from about twenty creels. They were hauled about every three days.

Fishing in Graemsay drew to a close around 1968 when James Wilson of Garson retired to Stromness, where he would continue to fish for about another eight years.