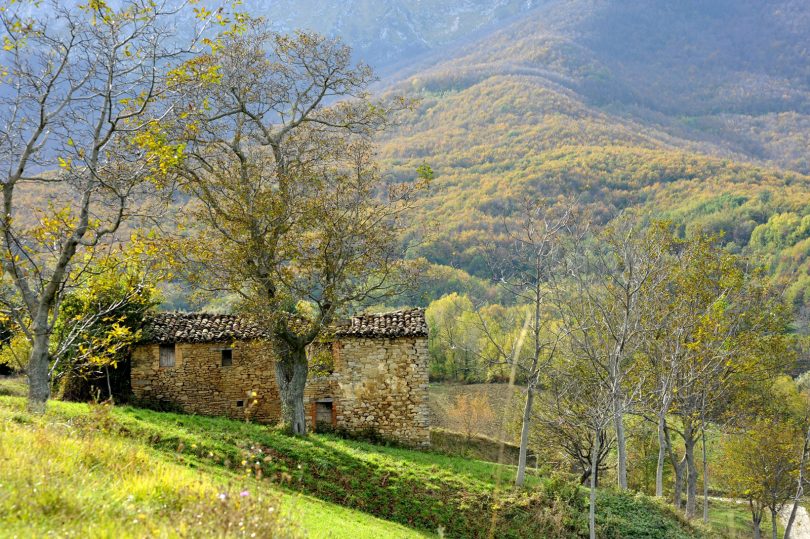 Each region of Italy has its own specialities and particularities, but it is the food of the Apennine Mountains of Abruzzo that I have come to know over the past six years and which has transported me back nostalgically to a childhood in Orkney, when almost everyone had their own vegetable garden and knew how to cook ‘from scratch’.

It would be incorrect to say that the people of these small farming communities in Abruzzo had remained completely untouched by the passage of time over the past fifty years. But they have managed to hold on to a traditional way of living in harmony with the landscape and the seasons that enables them to be largely self-sufficient.

That is all very well, you might argue, in Italy where there is guaranteed sunshine and warmth, but on the slopes of the mountain that can also be unpredictable. There are extremes of cold and wet, hot and dry. There is heavy snowfall in winter, torrential rain throughout the year, spectacular thunderstorms and winds that only an Orcadian would understand. Which is why the months from March to October see a flurry of outside activity for the production of crops and vegetables, taking full advantage of the growing season.

Farming methods are simple and are those that have been practised for generations – sowing, planting and harvesting according to the lunar calendar, rearing livestock for family consumption, and bottling and preserving the excess harvest to stock the larder for the long harsh winter.

It is little wonder then that food plays such an important part in the culture of these communities, when so much of the lifestyle revolves around its production. It is not only a means of sustaining the body. It also sustains the spirit and the bonds of family and friendship within the community.

Food and wine and laughter

Hospitality is boundless. As a stranger or a visitor you will never die of hunger or thirst, and you will never walk away from a house empty-handed. These people pride themselves, and rightly so, on the quality and abundance of the food they grow and produce, and they love to share. Every meal is a festival, and the more people who turn up to eat, the happier they are.

Imagine long bench tables laden with food, jugs of wine, chatter, laughter, singing, the chinking of glasses – a sort of stereotypical scene from an old Italian movie – and you have your daily family lunch, the main meal of the day and something of a ritual.

Conversation in many places during the morning consists of discussing what is going to be eaten at lunchtime and the best way to prepare and cook it. Shops and businesses close at 1 pm when people wish each other ‘buon pranzo’ (good lunch) and head off home

A buon pranzo traditionally consists of an antipasta (starter) of preserved meats, such as prosciutto, with bread, cheese and tomatoes. This is followed by one or two pasta dishes, then a meat dish with vegetables or salad, then dessert, and finally coffee and an ‘amaro’ (a bitter liqueur such as grappa) to aid the digestion.

Shops and businesses open again at 4 pm, and Italians work until 8 pm when it is time to close for the day and eat ‘cena’ or dinner, generally a slightly lighter meal than ‘pranzo’.

Food from the seasons

Fast food does not exist in these communities. Everything is prepared freshly and eaten seasonally and locally. Right now, winter vegetables are in abundance – broccoli, cauliflower, cabbage, fennel, different varieties of lettuce. The winter months from October to March are also the months for slaughtering the family pigs. These are organically-reared animals which typically weigh about 200 kg when slaughtered. Again, this is cause for people to get together to celebrate and help each other.

Absolutely every part of the pig is used, from its nose to its tail. Even the skin is cut finely and cooked in a traditional dish known as ‘cotechino con fagioli’ (pig skin with white beans), and the blood is cooked in a dish not dissimilar to our own black pudding.

Pig fat is used to make soap. A lot of the meat is dried and preserved. Very little is frozen. The intestines are cleaned and used to make sausages from the fattier parts of meat.

Sausages are 100 percent meat with only the addition of salt and pepper and in some cases chili. They are hung to dry for a couple of weeks and then preserved in oil in glass jars. A typical winter snack is a chunk of homemade bread spread with sausage and grilled on an open fire.

Lamb and mutton are also important in the diet. Most farms have at least a few sheep and make cheese from the milk – the full-flavoured pecorino for which this area is renowned. The ricotta is used in pasta dishes such as ravioli and in desserts.

Chicken, rabbit and goat are also farmed and many diets are augmented by ‘la caccia’ (hunting) – wild boar, hare, pigeons and pheasant.

The harvest of the summer

Freshness and flavour are all-important, and I really have to stick my neck out here and say that until you have eaten a fresh tomato grown on the slopes of these mountains you have no idea what a tomato really tastes like. They are huge, meaty, sweet and juicy.

One of the most simple yet mouth-wateringly delicious snacks is sliced tomato, sprinkled with salt, drizzled with olive oil, with a few torn basil leaves over the top on a slice of homemade bread.

Towards the end of August and all through September, Italians are busy harvesting and bottling the last of the summer vegetable crop. Tomatoes are pureed and bottled as sauce or with peppers and onions so that a simple pasta can be rustled up in seconds.

Other veg such as carrots, courgettes, onions are preserved under olive oil or ‘agrodolce’ (a sweet and sour sauce made from vinegar and sugar).

Food in every home

Once you have tasted this food, it becomes almost an addiction. When children leave home to go to university or work abroad, they take two suitcases with them – one for clothes, and the other packed with food.

It is more than just the taste or the time and care which has gone into its production. Each flavour conjures a memory: the garden, the mountains, a sunset, a roaring fire, friends, family. It is a way of life, and Italians like to take it with them wherever they go.