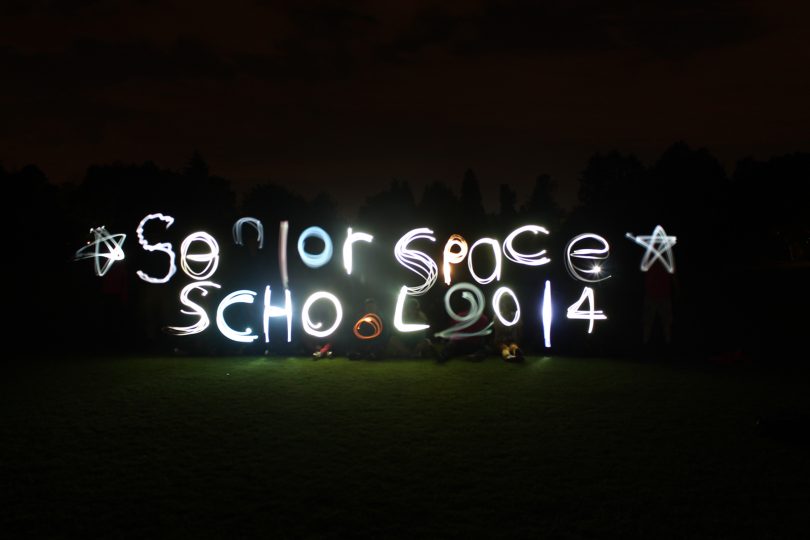 The course took place from the 3rd to the 10th of August at the University of Leicester and was open to 16 to 18 year olds. Throughout the week we spent three days at the university doing workshops and lectures, went on trips to the National Space Centre and Airbus Defence and Space, experienced weightlessness, camped, got to have a go observing using the University’s telescopes, and built rockets.

In the days we spent at the University, the lectures covered many different subjects from all areas of space science: from astrobiology to the formation of stars. They covered the whole of our solar system down to the moons and asteroids all the way out to some of the furthest away objects that can currently be detected. In one of the lectures we said ‘hello’ to Rosetta, by taking a selfie featuring everyone at space school.

One of the coolest workshops at the university was when we made comets from water, Worcestershire sauce (to represent the organic matter found on comets), sand and dry ice. The dry ice made the whole lot steam like a witch’s cauldron!

Whilst at the National Space Centre we had the opportunity to look around the exhibits and then spent the rest of the day doing a master class. We used the information in the exhibits to inform a presentation we did on why space exploration is necessary. This was interesting, because it forced us to think about the morality of space exploration when we struggle to look after the population of the world already.

In the master class we spent most of our time building and firing rockets. The rockets were made of paper, card and play-doh. They were fired by our very enthusiastic master class teacher using a bicycle pump, an air-tight tap and a pipe to put the rocket onto. The tap was closed and pressure built up using the pipe, then the tap was opened releasing the pressure and firing the rocket.

Our group held the space school record for the whole of two minutes, but were then beaten by the next group, who beat the nation space centre record at over 85 metres. Our Mentors were beaten by every rocket, including one which had one of its wings on upside down!

Airbus Defence and Space is a company based in the UK which develops technology in the aerospace and defence sectors. They are currently involved in the exciting LISA Pathfinder mission, which plans to launch a space probe in September to test equipment necessary for studying the gravitational waves predicted by Einstein in 1916. The probe will also be studying Einstein’s geodesic motion. Their involvement in this project meant that we got to see the space probe being built: the highlight of the visit for me.

Whilst we were there we also learnt about different materials used in space exploration, had a tour of the premises and built model satellites. The model satellites had to be able to hold an egg inside them and for the egg to not break when put in a box and shaken by a member of an opposing team. Ours was a cube with cones on the edges to spread out the force of the impact and was one of only two where the egg remained intact.

We experienced weightlessness, a little similar to what an astronaut would feel in space, in the form of indoor skydiving and scuba diving. The skydiving was in a vertical tunnel with a fan at the bottom that pushes you into the air.

This was one of the weirdest experiences of the week because you felt as if you could hit the bottom at any point. The scuba diving was less terrifying, but it was no harder to get your head around being able to breathe underwater. Whilst we were under we learnt how to use all of the equipment and then did a teamwork exercise.

I went observing twice in the week and saw the Andromeda Galaxy, Hercules globular cluster (M13), the Moon, and Saturn through the university’s 20 inch piCETL telescope.

Whilst we were waiting for our turn to look through the lens we were shown some constellations and, since it was a clear night, had a go at looking at the band of the Milky Way across the sky. This was an eye-opener for me because even though we were in the middle of one of the city’s biggest parks there was just no comparison to the beautiful clear skies we have in Orkney!

On the second night I went observing we also did some long exposure photographs with torches.

Throughout the week we worked on rockets in teams. The design brief stated that the rockets had to be capable of carrying a human cargo to Mars inside the detachable nose cone which had to land on deployable legs, and have a parachute which would inflate to insure the gentle landing of the humans inside.

The nose cone came off at the peak of the rocket’s flight using the launch charge which fired a puff of air to push the parachute and nose cone out the end of the main body of the rocket, where the wings were glued.

The rockets were scored based on how straight their flight was, how ingenious the deployment of the legs was, whether the nose cone came out and landed smoothly and any extras added, such as making it pretty.

Our rocket “AMAzing” posed quite a few problems in making, mostly because the legs had to be deployable. In the end we went with a system of straws and string demonstrated to us by one of our awesome Mentors, using a model hand where the strings worked as the tendons and the straws as the bones and a channel for the string to go through.

On our nosecone we put four pieces of straw with the strings from the parachute running through them and into another piece of straw which was pulled up and out by the parachute strings when the parachute inflated. This system was fairly effective, and worked on most of the trial runs! Unfortunately our rockets were never put to the test, because of the tail end of the hurricane which swept the country in August.

This amazing week would not have been able to happen if not for the kind generosity of the Evie and Rendall Community Council, whose grant made it possible for me pay for the course. I am very grateful to them for making this great fun (very tiring!) and educational week possible. I had an amazing week and it even helped me to realise that I would like to study Physics at University. I made many new and lasting friends and would love to go back as a Mentor. I would also encourage anyone who thinks they might be interested in applying go for it! It can also be used a gold Duke of Edinburgh residential for anyone interested.

Alusha Romaniszyn is a Fifth Year pupil of Stromness Academy and is planning on a degree in Physics, when she finally finishes her exams! She loves the stars and aims to go see them when she grows up, before returning to Earth to teach.