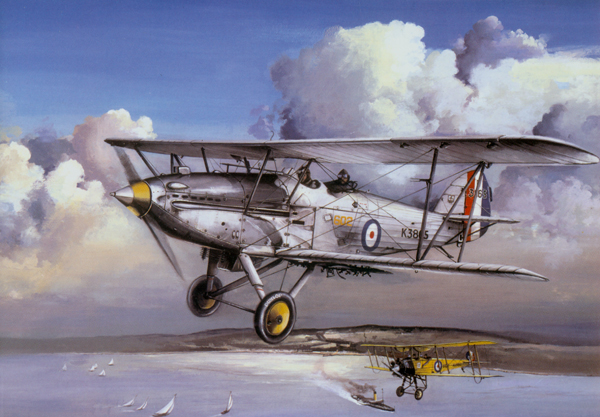 Former Head of Glasgow School of Art, Prof. Cameron will be giving a talk entitled ‘From Pilcher to the Planets: Scotland’s Role in Aviation History’.

Glasgow-born Prof. Cameron has had a lifelong fascination with the art of engineering and in particular aviation and railways.

Over the past 25 years he has produced more than 700 illustrations of events in Scottish aviation history and says: “I paint the photographs people didn’t take.”

As well as being a gifted engineer and artist, Prof. Cameron is also an entertaining speaker and the members of AOP (Another Orkney Production), organisers of the Aviation Festival, are looking forward to welcoming him to Orkney.

Another popular speaker, Commander David Hobbs MBE (retired), will be speaking at the Birsay Heritage Centre about the Royal Naval air stations HMS Tern in Twatt and HMS Jackdaw at Crail. He will also show some recently-discovered WW2 film from the Imperial War Museum. That will be on Friday 9 September at 7.30 pm.

There will also be talks during the weekend by Ian Brown of the National Museum of Flight on airships, and by Robert Foden on the theme ‘When things go wrong’ – with tales however of happy endings in which everyone survives.

This year’s festival is still in the planning stages, and the organsiers say there may yet be a few surprises in store. AOP are hoping to build on the success of last year’s event which saw the emotional arrival in Orkney of a De Havilland Dragon Rapide.

People flocked to see the aircraft, far exceeding the organisers’ expectations, with a crowd of 1500 turning out at Twatt Aerodrome in Birsay for the Open Day which was organized in conjunction with Birsay Heritage Trust.

During the four days of the festival about 50 people were able to enjoy a flight in the Rapide and AOP’s Moya MacDonald said there were many happy stories connected with it, such as the woman who had an intense fear of flying, but was determined to take to the skies in the Rapide because of the important role it had played in Orkney’s aviation history.

She was beaming from ear to ear when she landed,” Moya says. “And she told us it was the best experience of her life.”

The Orkney Aviation Festival has grown a little every year and Moya hopes it will continue in this way although she says it will never be a huge production on the scale of the Prestwick Airshow.

“We started it to celebrate Orkney’s aviation history, which is a very important part of the aviation history of Scotland from the flying boats in Scapa Flow to Loganair’s inter-island services.”

It follows on immediately after the Orkney International Science Festival.

The science festival finishes on the Wednesday and the aviation festival starts on the Thursday and continues to the Sunday, offering visitors to Orkney another four days of activities and events.”

The Aviation Festival is not the only activity that AOP is involved in. It also produced the first ever general information leaflet about Scapa Flow in 2004, with the help of a Heritage Lottery Grant, which also assisted in the production of two films about Scapa Flow.

Echoes is a wordless documentary of historical and modern images set to evocative music, while The Diary of Gunner Astles gives a wonderful personal insight into life in Orkney during the war.

Following on from this, Celebrating Scapa Flow is now an annual event which takes place in early May, the format for which is a weekend of talks, outings and events focusing on different aspects of the story of Scapa Flow.

Then in late autumn there is Billy’s Night Oot, an evening of Orkney Film Archive in memory of projectionist Billy Scollay. This event has been so popular that it has expanded from its one night at the Pickaquoy Centre to take in Hoy, South Ronaldsay and Shapinsay.