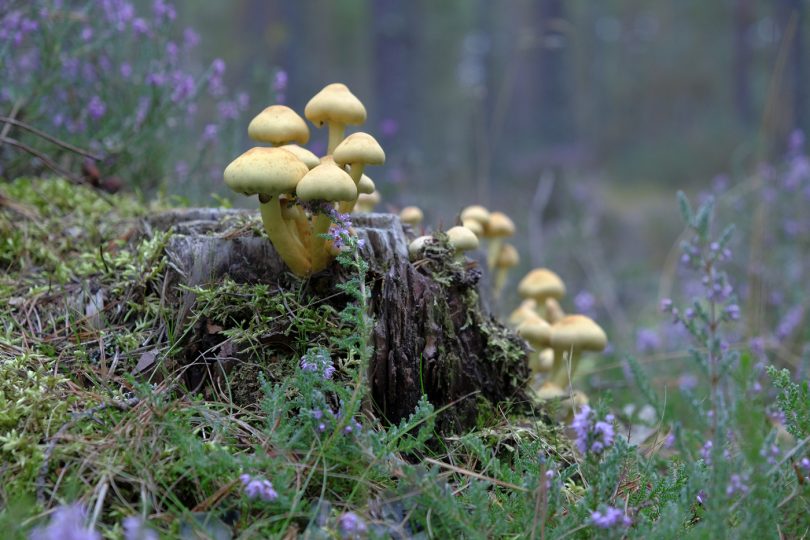 The blight hadn’t reached the tubers but the tops needed to be pulled and disposed of carefully NOT IN THE COMPOST BIN! So, over the weekend he harvested the lot and stashed them away in the tattie store in the garage. Some of last year’s crop are still edible – a bit sprouty, but fine as mash.

Potato blight – is a fungus.

… and my heart sank. It looked like a disease and we have quite a lot of bay willows – and willows of various kinds.  I had visions of having to grub up our willows trees, including ‘Julie’s Willow’ planted in memory of a good friend.

But a bit of research took us to the Royal Horticultural Society’s advice on Rust…  which was very re-assuring – it looks like no real harm will come to our willows from their infection.

This kind of Rust – is a fungus too.

This is the time of year when fungi are popping up in the paths in the meadow. White spindles, which I refer to as Dead Men’s Fingers. Don’t they look like a hand, grasping…

Some of the fungi aren’t tempting at all…

… while some look luscious but are not edible!!! To quote Terry Pratchett –  ‘All Fungi are edible. Some fungi are only edible once.’

The Orkney News ran a series ‘Tis The Season to See Fungi. Some we recognized – some we didn’t – best be careful when dealing with fungi.

Mike and I used to live in Suffolk and had a regular walk down across the nearby marshes to a ruinous windmill. One time, on our way back we picked what we were both quite sure were ordinary field mushrooms. We included them in a pie for our tea, and both felt most peculiar! Not un-well… more just… un-real! No real harm done – but it was a bit disconcerting, and shows how much you need to know about, and be quite sure about, what you’re eating when foraging for free food!

And no, they weren’t ‘magic mushrooms’ – we would both have recognized them. When I was at Uni in a rural part of mid-Wales, in the autumn the local hippies would be out scouring the fields for magic mushrooms. I had a chum who liked to eat them on buttery toast. A slightly different take on mushroom bruschetta – for which we invariably use shop bought mushrooms….