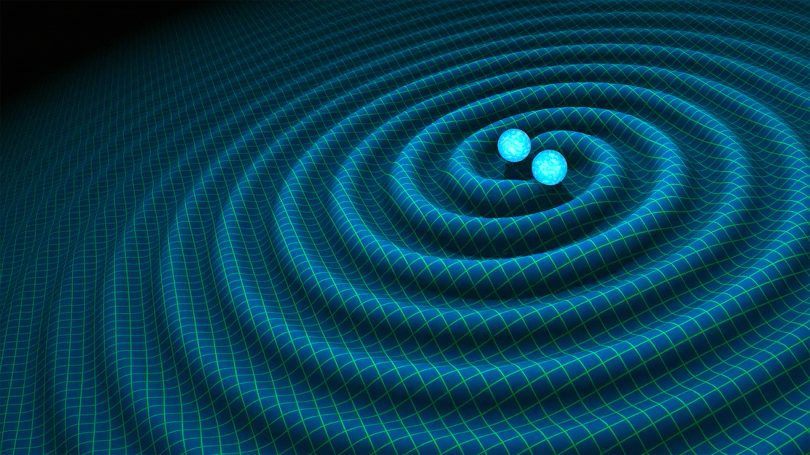 1.3 billion years ago, two black holes spiralled into each other at almost two-thirds of the speed of light, briefly generating fifty times the energy of the entire observable universe and distorting time and space.

Ever since then, just as predicted by Albert Einstein, the gravitational waves caused by this distortion have travelled through the universe – and reached Earth on 14 September 2015.

For the first time ever, the waves were detected as they passed through. At that distance the effect was so small that the necessary sensitivity is compared to measuring the distance to Proxima Centauri to the accuracy of the width of a human hair.

One interferometer is in Hanford in Washington State and the other is in Livingstone, Louisiana. Together, they are known as LIGO (Laser Interferometry Gravitational Waves Observatory).

On each site there are two 4-km long high-vacuum arms at right angles to each other with heavy mirrors suspended on fused silica fibres hanging at the ends. Laser light is split where the two arms join, and half is sent down each arm and bounces back from the mirror at the end.

The interferometer studies the pattern of the wavelengths when the beams meet again. If one beam has travelled further than the other, there will be a difference in the wave pattern. The difference in the length of travel of one of the beams in September last year was 1/10,000th of the width of a proton.

This idea has been around for a long time. Interferometers were invented near the end of the 19th Century by Albert Michelson, to investigate the existence of the lumiferous ether, then thought to permeate the universe.

The basic design is still the same, but the size and complexity of the LIGO detectors mean that they are the work of many scientists. There are, however, three men who have been recognised as the pioneers of LIGO. In September this year Ron Drever and Kip Thorne of Caltech and Rai Weiss of MIT were jointly awarded Norway’s Kavli Prize in Astrophysics.

The Norwegians were pleased to hear that one of the Kavli Laureates had Orcadian ancestry.

The start of the story

George Drever and Jane Hewison were married in Papa Westray in 1846 and moved to Dunbartonshire.

Their grandson George Drever was a doctor in Bishopton, Renfrewshire and one of his sons, Ian, followed him into that profession but the other, Ronald, showed remarkable talent in the practical side of physics from a very early age.

Ian remembers Ronald’s fascination with electricity; he made his own electric motors, including one that powered a 12-inch-long boat he made from scraps of wood. He also made his own tools with which to repair clocks and radios for his father’s patients.

Having learned in his Physics class at Glasgow Academy how to make a rudimentary television, Ronald replicated and enhanced this at home, using assorted pieces of junk and war surplus, so his family watched the Queen’s coronation on a 4-inch screen, sitting on car bumpers in his workshop in the garage.

It was George Drever’s brother, John Richan, known as Uncle Rec, who first showed Ronald how to design and construct with such precision. He had been trained in precision engineering and had worked on Lancaster bombers during the war. This included making fine adjustments to the spinning mechanisms for the Dam Busters’ bouncing bombs.

Ronald graduated from Glasgow University in 1953, with a degree in Pure Science, and stayed there for his PhD, supervised by pioneering experimental physicists Professor Philip Dee and Sir Samuel Curran. His thesis in 1958 was ‘Studies of orbital electron capture using proportional counters’. He stayed at Glasgow to do post-doctorate research on fundamental relativity and gravitational theories.

The astounding precision and ingenuity of Ronald Drever’s experimental work is illustrated in his 1960 experiment to test Mach’s Principle by observing nuclear precession within the earth’s magnetic field.

In the family back-garden in Bishopton, he strung up car batteries and equipment he had borrowed from the lab. Then, using an old camera and compass, he took measurements every half-hour for twenty-four hours, of lithium nuclei in the form of a solution in a polythene bottle surrounded by a coil and placed with its axis perpendicular to the direction of the earth’s field. He detected a shift nearly as small as one part in a trillion trillion and the experiment is recognised as a precision test of Einstein’s Equivalence Principle.

The experiment drew world-wide attention and Drever was invited to spend a year as a Research Fellow at Harvard, where he developed sensitive radiation detectors. He returned to lecture at Glasgow University and, after attending a lecture in Oxford where Dr Joseph Weber claimed to have detected gravitational waves, he initiated a gravitational waves group and, with Dr James Hough, built the most highly sensitive gravitational detectors to date but no waves were detected.

In 1976, Dr Robert Forward came to Glasgow and presented the results of his research on interferometers and Drever recognised this as the way forward in detecting gravitational waves. From then on, he concentrated on the development of laser interferometers for the work.

In 1978, Professor Drever designed and built his own 10-metre long Fabry-Perot interferometer, twice as large as any that had gone before. In 1979, he became involved in even larger plans, when he was invited to join the gravitational wave group at Caltech. Until 1984, he shared his time between Glasgow and Caltech, providing his special expertise in designing the instruments needed to turn these concepts into reality.

A new way of keeping the laser light pure and steady had to be invented and the Pound-Drever-Hall technique, published in 1983, is now used in a very wide variety of fields.

In 1984, Professor Drever had to choose between Glasgow and California. It had become clear by this time that the size of the interferometer was fundamentally important so he chose California and was appointed one of the co-leaders of LIGO, a joint project between Caltech and MIT.

For the next eight years, he developed methods to increase the efficiency and power of the optical systems. Without these, the necessary level of precision would have been impossible.

Drever left the LIGO project in 1992 but continued to work at Caltech, experimenting on new ways to improve the design. Then, in 2008, he was diagnosed with dementia and returned to Scotland. He now lives in a residential home but his brother Ian writes:

Ronald’s spirits have been buoyed up by the news of the discoveries of his life’s work. He watched the announcement of 18 February 2016 and showed delight in the appearance of his fellow collaborators. He remains a cheerful character who enjoys the company of others. It’s wonderful that he has witnessed the detection of gravity waves in his lifetime allowing others to build on his vision.”

Honoured by the world

Norway is not alone in honouring LIGO’s pioneers this year. Ian Drever accepted the Kavli Prize on his brother’s behalf and also went to Yale to accept the Gruber Cosmology Prize. Ian’s son, John Levack Drever, Professor of Acoustic Ecology and Sound Art at Goldsmiths, University of London went to Hong Kong to accept the Shaw Prize. At an awards ceremony in San Francisco the Special Breakthrough Prize in Fundamental Physics has been presented.

Everything about this towering achievement is hard to comprehend and that includes its far-reaching effects and what discoveries it will lead to. How deeply satisfying that Orkney can claim a share in Professor Ronald Drever, whose practical scientific skills played such a vital part. Where would the world be without us?

With thanks to the Drever family for biographical information. Further information can be found at: