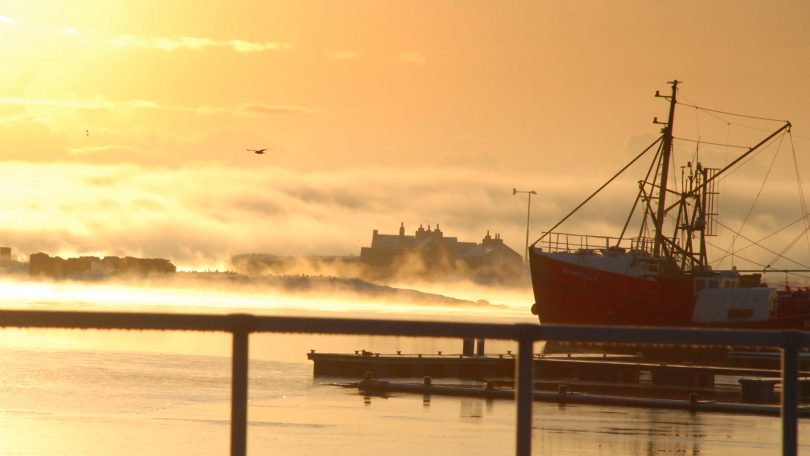 Low cloud is quite frequent in Orkney, especially in the winter. Coming from the West, it rolls in across the central part of the mainland, over Stenness and Harray, then funnels slowly through the narrow gap at Binscarth to spread out into Firth and Rendall. Low cloud can then sit for days like a grey tea cosy over the land.

But sea mist or haar is usually less permanent. A few days of hot sun here between April and September, then we get a haar from the East. It can be dense, filling the streets of Kirkwall with its coolness, an ethereal kiss from the Kraken.

The mechanism is that the hotter land air rises, sucking in air from nearby; that air, travelling across the lower-temperature sea, cools so moisture droplets condense out and become suspended in the atmosphere.

Just the other day we had a haar. Drivers could not see one end of the Barriers from the other. Cruise liners with eager passengers blew their foghorns. We used to get the deep boom of different foghorns round the coast, but the Northern Lighthouse Commissioners in their wisdom felt that ships and yachts knew where they were now what with satellite navigation and switched off the foghorns at lighthouses.

The mysterious aspect of haar has given rise to folklore. In the story of the vanishing island of Hether Blether, losing your way in the mist in inshore waters is a key element in the story, as is the partial solution a piece of iron used as a navigation device. The old Norse steersmen, the leidsogemadr, used a lodestone that gave an approximation of magnetic north to help them. But they also listened. The thing about a haar is that it seems to either muffle or enhance sound. Perhaps this is because the air is usually still; seabirds can be heard out on the water, the eerie call of a seal, waves gently lapping a shore, or breaking on a skerry. And voices carry.

Small fishing boats abounded in eighteenth-century Orkney and they could often be caught out in a haar, because the other feature of a haar is the speed with which it can roll in. One minute you are in the hot sun, then you are shivering in the mist. Earlier fishermen enlisted their nostrils; they could smell the land, the heather or the wild flowers. In a quote from a stirring song by Canadian folk singer Stan Rogers, “he could smell the flowers of Bermuda in the gale when he wrecked on the North Rock shore.”

I once went to what I called the Elvar Wedding in North Ronaldsay. The day before and the day after was glorious sunshine, but the day of the wedding a thick haar enveloped the North Isles. Yet we set off on the ferry, then as if by a miracle we pierced the mist to find North Ronaldsay in glorious sunshine as if protected by a magical spell and people all gathered on the shore.

Strong sunshine will burn the haar back but as long as easterlies prevail it can linger menacingly on the horizon ready to creep in at night. It takes a stiff warm westerly wind to really blow it away.