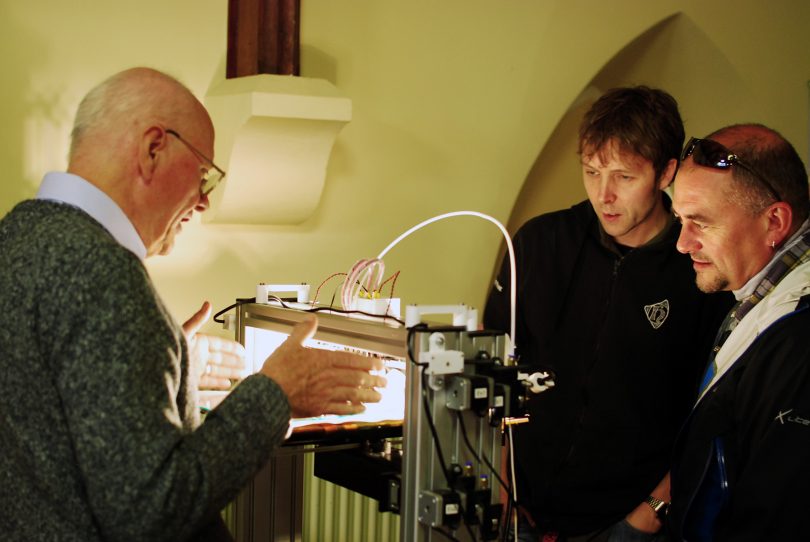 The desktop computer started us off with printing and publishing to an extent that we can now produce our own books and magazines.

The new 3D printers allow us to actually manufacture – to build up things layer by layer. So we can replace a broken plastic fitting, or create a new design for one. Artists are using the technology to create new works or art and in future it’s likely that many spare parts for cars or homes will be online, for us to download and print off ourselves. It’s now being predicted that the 3D printer will do for manufacturing what the PC did for computing.

Around the world groups of people are getting together to try out the new equipment – and to make things for themselves. They’re setting up makerspaces. It’s a kind of modern version of the older garage workshops where people used to help each other and share equipment.

The aim is to take up the new opportunities whereby the ‘the means of production’ are truly coming into ‘the hands of the people’. With the advent of 3D printers and in particular ‘Open Source’ designs, a makerspace group can put one together for low cost. Then (the beauty of it is….) the new machine can be used to make many of the parts needed to make other machines and these machines can make more parts…..

Here, for instance, is the RepRap machine.

RepRap is the generic term for a range of computer controlled 3D printers all named after biologists.  This is what a Prusa Mendel V2 machine looks like as a SketchUp model.   You MUST visit the site http://reprap.org/wiki/RepRap to get the full info about this amazingly cost effective machine.

And it’s not only about making new things, but re-using old ones as well, in a suitably imaginative way. This applies whether it’s a hobby or whether it’s a potential business idea.

It is not very productive to tell other people (with the money…) that you have a really good idea and, worse still, to keep on telling them the same thing! You will have a LOT more fun doing it with your friends. Don’t think that you can’t do it yourselves because you need machinery (for example – a computer controlled machine tool).  You can build a simple machine from (mostly) industrial waste and even domestic rubbish.

The machine below was made from bits of an old greenhouse, some plumbing fittings from a washing machine and an old bath, a vacuum cleaner, home-made electronics and a BBC Master computer.  It has “happily” and reliably, produced wing ribs and other parts for many model aircraft over the last twenty years and is still working…. Good old British technology (Acorn)!

If you want to find out more, you are welcome to contact the T-Exchange.

We are a relatively newly-formed group (December 2011) formed under the auspices of the British Science Association and consisting of unlike-minded individuals, living around the Moray Firth, who want to hack their own or joint way with creative thinking, practical skills and new or old technology to make innovative objects and devices.

Right now, we are just over forty people strong with few resources and nowhere to put them but we are working on it. Our physical locations vary from Aberdeenshire to the Black Isle but if we have a centre of gravity for the world map you could probably pin it in Forres at the moment. Our cyberselves meet on Facebook as the T-Exchange.

and in case you were wondering,

The ‘T’ stands for ‘Thinking’, ‘Tenacity’, ‘Technology’, ‘Telecommunications’, ‘Tools’, ‘Talk’ and the essential ‘Tea’. We aim to exchange all of these creatively.