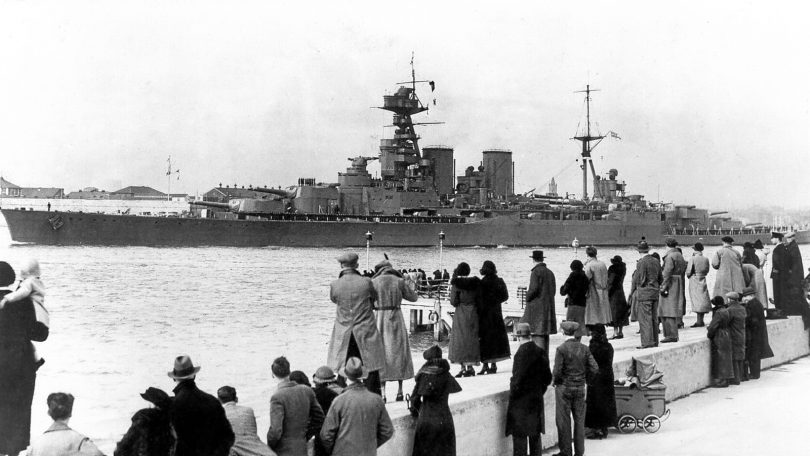 HMS Hood has a strong claim to being the most famous warship of the 20th century, a paragon of the might of British sea power between the wars yet ultimately a tragic symbol of loss at sea.

Hood was the biggest battlecruiser ever built, the largest warship in the world throughout her career and the largest RN warship ever commissioned until the recent entry into service of the Queen Elizabeth class aircraft carriers. She was an icon of British might and global influence between the World Wars. Her fame was guaranteed by her sheer size, her widely-acknowledged graceful lines and by the fact that she was one of a kind – the only ship of her class. Even her name was memorable.  Yet, ultimately, she came to symbolise the tragic cost of war: she met a catastrophic end in World War II, blown up by a shell from the new German battleship Bismarck in 1941. Of Hood’s ship’s company of 1418, just three men survived.

Built on the Clyde

The warship which was to become Hood was ordered, at the height of World War I, from the Clydebank shipyard of John Brown – shipyard number 460. She was conceived as a battlecruiser – a warship type which shared the ‘big gun’ firepower of a battleship but which sacrificed some armour for sheer speed. Not only could her eight 15-inch guns hurl a near-one-tonne shell seventeen miles, but her 144,000 horsepower steam turbines could carry her into battle at 32 knots – nearly 37 mph. Hood was planned to be the apotheosis of the type – larger, faster and more powerfully armed than her predecessors.

But, just as her keel was about to be laid, the vulnerability of British battlecruisers, illustrated by the explosive loss of three of them at the Battle of Jutland in May 1916, caused a rapid reappraisal of the viability of the type. Hood’s construction was delayed by some weeks in order that any lessons could be learnt. As a result, Hood’s design was subject to some late alterations – around 4000 tons of extra armour were added to her plans, making her armour comparable with that of contemporary battleships. Her keel-laying went ahead on 1 September 1916, and HMS Hood was commissioned in 1920, too late to see service in World War I.

For twenty years, Hood was the pride of the Royal Navy. Successive Captains and Commanders strove to ensure that she was second to no other ship in all the activities which a warship undertakes. Her cleanliness, efficiency and reputation were repeatedly demonstrated by her performance in fleet-wide exercises in gunnery, seamanship, engineering and sport. Devonport-based for the first half of her service, she moved home port to Portsmouth later in her career.  Since many fleet exercises were held in waters around the north of Scotland, Hood was a frequent visitor to Invergordon and Scapa Flow.

Hood’s status as a symbol of British sea power meant that she was the automatic choice to lead the ‘Special Service Squadron’ on the ‘Empire Cruise’ circumnavigation over ten months in 1923-4.  In company with her fellow battlecruiser HMS Repulse and a squadron of light cruisers, she visited ports in Africa, Asia, Australia, New Zealand, Canada and the USA.  Hood was the perfect vessel to ‘show the flag’ across the world and huge crowds welcomed her wherever she went. The Empire Cruise was just one of many occasions on which Hood ‘flew the flag’ for Britain.

The Hood and the Bismarck

By the outbreak of the Second World War, Hood was nearly two decades in commission. Because of her high value and her busy programme, it had not been possible to spare her for the major refit and upgrade which had been planned, and modern battleships of the new war era were equipped with armour which enjoyed the benefits of twenty years of development. Despite this, Hood was still a formidable weapon of war: in the tragic Battle of Mers el Kébir in July 1940, she and other RN warships were ordered to neutralise the battleships of Britain’s recent former ally France, and inflicted catastrophic damage on them. It was a tragic episode, but it served to demonstrate that ‘The Mighty Hood’ was still a force to be reckoned with.

So it was no surprise that, in May 1941, Hood was dispatched from Scapa Flow to intercept the new German battleship Bismarck, known to have left Norway on a commerce-raiding operation in the Atlantic: Hood’s speed would enable her to cover vast spans of ocean to hunt down her adversary. With the brand-new, and untried, battleship Prince of Wales, Hood intercepted the Bismarck, and her consort the heavy cruiser Prinz Eugen, in the Denmark Strait, between Iceland and Greenland. The engagement was short and brutal, and a single German shell, piercing Hood at a weak point in her armour, ended the career of Hood and the lives of 1,415 men – the largest-ever loss of life in a Royal Navy warship. Prince of Wales, suffering technical teething troubles, was forced to break off the engagement.

Hood’s loss resonated around the world, and dealt a blow to national morale which made it imperative that the Bismarck be destroyed. Three days later, the German battleship herself was hunted down and sunk by the Royal Navy.

The sheer numbers of sailors lost in Hood left a void for so many families, and memories of them and their unique ship remained strong through the years. That is why, in 1975, the HMS Hood Association was founded, by veterans who had served in Hood before her last fateful voyage, by the remaining two of the three men who had survived the sinking, and by family members of some of those who had lost their lives in her.

Over 45 years on, the HMS Hood Association continues to thrive, with membership open to all and with larger numbers of members than ever before – well over 400. Just one Hood veteran remains alive: Victor Osborne, of Nanaimo, British Columbia, Canada, 102 years old and still driving his own car! But family members of Hood’s sailors are still at the heart of the organisation.

The Association has strong links with affiliated organisations: with further education college West College Scotland (which occupies the site of the previous John Brown’s Clydebank shipyard) and two cadet units.  Our website www.hmshood.org.uk reaches out to all generations and our Facebook group has well over 3000 members. The Association has sponsored a 30-minute film, For Years Unseen, about the recovery of Hood’s bell from her wreck by ‘shipwreck hunter’ David Mearns in 2015.  It is to be found on YouTube, where it has attracted over 600,000 views.

Membership of the HMS Hood Association is open to anyone, and costs just £12 per year. Details of how to join are on the Association’s website.

The memory of HMS Hood deserves to be preserved, and the HMS Hood Association continues to devote its best efforts to that end.

Cdr William Sutherland RN is chairman of the HMS Hood Association. Hejoined the Instructor Branch of the Royal Navy in 1981, following five years asa teacher. His service afloat included gaining his bridge watchkeepingcertificate in the aircraft carrier HMS Illustrious, in which he visitedAustralia in 1986 to help celebrate 75 years of the RAN. His RN service lastedvery nearly 25 years, and in his later appointments he specialised in personnelmanagement in the Ministry of Defence.