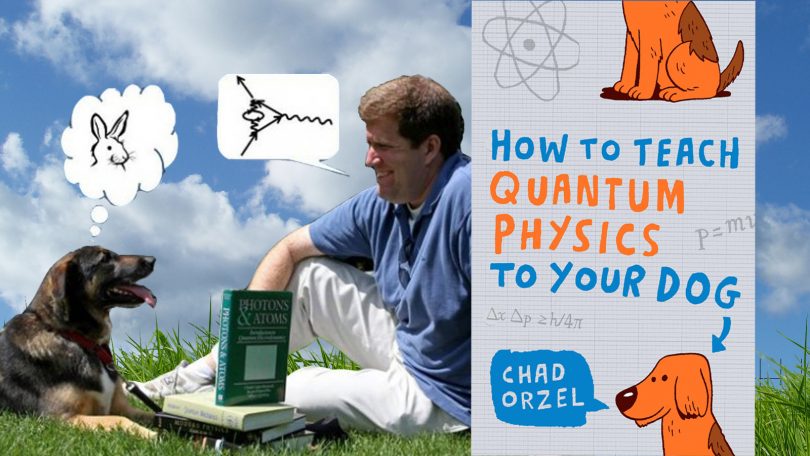 It really started with Emmy, who’s a bit bigger than some of us and really bright. She found that her human liked to talk to her about physics and she helped him firm up his ideas.

Her human, by the way, is Chad Orzel. He’s a physics professor and he likes to talk to people about physics. Emmy has to listen but she doesn’t mind as he usually opens a packet of treats to help the flow of conversation.

Emmy is one of us, a German Shepherd mix adopted by Chad and Kate in 2003. Her interests include ‘long walks, bunnies, squirrels, quantum physics, squeaky toys, and belly rubs’. She lives with Chad, Kate and their daughter in Niskayuna, NY – ‘working diligently to protect the house from mail carriers, inferior dogs, and evil squirrels.’

Those walks with Emmy taught Chad so much.

“Talking to the dog is worthwhile,” he says, “because it can help me see how to explain physics to my human students. Humans all come at the subject with the same set of preconceptions about how the world works, and what ‘should’ happen, and it can be very hard to shake those off. That’s a big barrier to understanding quantum physics.

Dogs look at the world in a very different way. To a dog, the world is a neverending source of wonder and amazement. You can walk your dog past the same rock every morning, and every morning, she’ll sniff that rock like she’s never sniffed it before. Dogs are surprised by things we take for granted, and they take in stride things that would leave us complexly baffled.

Take the dog’s bowl, for example. Every now and then, we put scraps from dinner in the bowl when she’s not looking, and she’s become convinced that her bowl is magic – that tasty food just appears in it out of nowhere. She’ll wander over a couple of times a day, and look just to see if anything good has turned up, even when we haven’t been anywhere near the bowl in hours.

This puts her is a better position to understand quantum electrodynamics than many humans.

One of the most surprising features of QED, in Feynman’s formulation, is the idea of ‘virtual particles’. You have an electron that’s moving along, minding its own business, and every now and then, particle-antiparticle pairs just pop into existence for a very short time. They don’t stick around very long, but they have a real and measurable influence on the way electrons interact with each other, and with other particles.”

So there you are. Things that baffle humans are no problem to us to deal with, and if they realise this and start to talk their problems through, we can help them out. And as Emmy shows, there are things about this stuff that we can appreciate.

Well, for example, there was this guy named Erwin Schrödinger, who had this idea about a cat. You see, if you take a cat, and you stick it in a box with a thing that will kill it 50% of the time. And before you open the box, the cat is both alive and dead at the same time.

“Well, technically, it’s a gedankenexperiment, an imaginary experiment used to argue that the ‘Copenhagen Interpretation’ that provides the philosophical framework for understanding quantum mechanics leads to absurd results.
But, I mean, think about it: putting cars in boxes! That’s brilliant. You need to be some sort of genius human to come up with a great idea like that.”

But for the actual development of the concept, she says, we can forget Schrödinger’s Cat.

Quantum physics is about dogs.”

So Emmy provided the inspiration and the dialogue, and Chad did all the bits with mathematics.

And typing. He did all the typing. Once he finished it, though, we read it over together, and I helped him fix it up.”

If you’re one of those humans who doesn’t fully appreciate your dog’s mental capacities and want to raise the quality of his or then intellectual surroundings, then this book is really for you. And if, like a lot of humans, you have some problems with quantum theory, this could be your opportunity to enlist your dog’s help. Either way, a copy could be a prudent investment.

Jenny, with a family background that may have included Labradors and collies, came originally from Quoyloo and always enjoyed an opportunity to return to native territory and monitor the levels of rabbits at the Bay of Skaill.