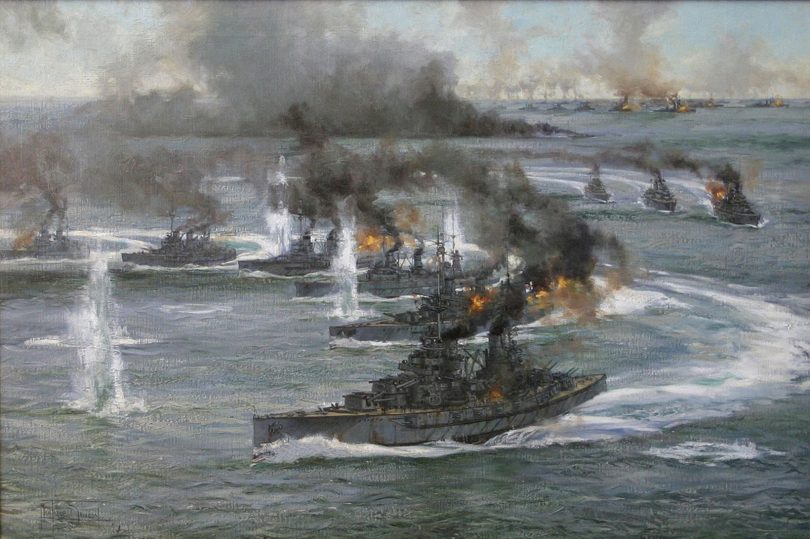 The stamps – which are available online – come from the Isle of Man Post Office, which for Jutland brought in two descendants of the man who led the British fleet in the battle, Admiral Sir John Jellicoe. His great-granddaughter Francesca Jellicoe designed the stamps, and his grandson Nick Jellicoe wrote the accompanying information, along with an analysis of the battle.

The two £1.75 stamps feature the faces of the four men who led the fleets at Jutland. Pictured along with Jellicoe is his German counterpart Admiral Reinhard Scheer. The second stamp shows Vice Admiral Sir David Beatty, who commanded the British battle cruisers, and Vice Admiral Franz Hipper, who led the German 1st Scouting Group.

The stamps are produced as a miniature sheet, with a background showing dramatic scenes from the battle by artists Willy Stöwer, William Lionel Whyllie and Pat McDonald.

The battle, fought on 31 May and 1 June 1916, saw the loss of fourteen British ships and eleven German ships, with both sides claiming victory, and argument that is still the source of debate among historians today.

Among the British fleet at Jutland were several men who had returned from the Antarctic. They were among the crew of the Terra Nova which had tried to bring supplies to Captain Scott’s expedition but was fatally delayed by ice. Arriving back in the UK, the crew’s lives were soon changed by war, which took them to the Western Front, Gallipoli, and in 1916 Jutland. Writer Anne Strathie will tell their story in a talk on Monday 5 September, based on her book From Ice Floes to Battlefields

The Festival will also feature the story of Shackleton’s Antarctic expedition, which overcame a series of massive challenges when its ship Endurance was caught in the ice and was carried north for hundreds of miles before eventually being crushed. The crew had to take to the boats and eventually reached the uninhabited Elephant Island, where no one could have known to look for them.

Shackleton took a small group on a voyage to South Georgia, coping with mountainous seas and then a climb over the mountains to the Norwegian whaling base on the island. The Norwegian rescue mission arrived at Elephant Island on 30 August 1916.

A second miniature sheet from the Isle of Man Post Office – and also available online – commemorates the Endurance expedition together with the explorer Henry Worsley who set out on 13 November 2015 in an attempt to achieve Shackleton’s aims of crossing Antarctica. His aim was to mark the Endurance expedition centenary and to make the first ever solo, unsupported and unassisted crossing.

He came remarkably close to doing so, covering 913 miles in the most unfavourable weather conditions, and eventually had to make the decision to be picked up and airlifted out, only 30 miles short of his goal. But by this time his physical condition had deteriorated so much that he died in hospital.

Henry Worsley was the great-grandson of Shackleton’s second-in-command on an earlier expedition, Jameson Boyd Adams, and in an interview in 2011 spoke of his admiration for Adams and Shackleton.

The story of the original Endurance expedition and its rescue 100 years ago will be told in the Science Festival by Arctic historian Dr Maria Pia Casarini, on Monday 5 September.

Other sets of stamps from the Isle of Man Post Office this year include the theme of innovation in aerospace, and also images of birds by the artist and ornithologist Matt Sewell.