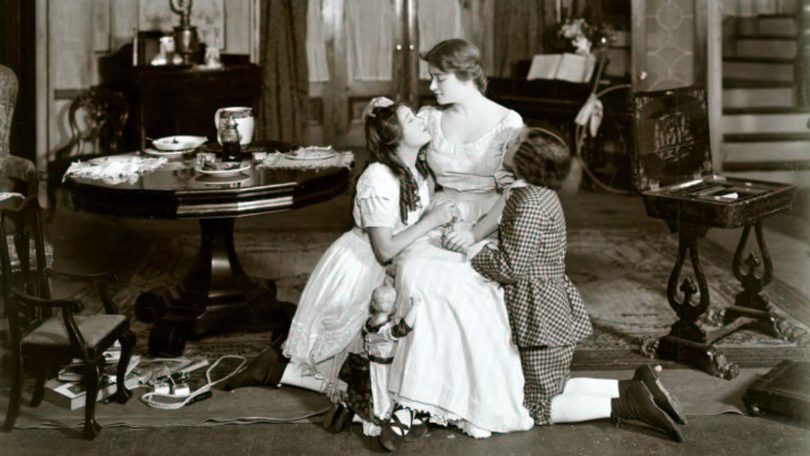 Mary Pickford on stage, "The Warrens of Virginia,"1907

He had become a leading name himself by creating a weekly magazine that was a beacon for the development of the industry. It covered the latest releases, highlighted inventions, championed standards of equipment and safety, and rallied against fraud and monopolies.

He was the eldest of four children born to James P. Chalmers snr and Eliza Firth. They had a small croft in Tankerness at a site which is now part of one of the runways of Kirkwall airport.

He left school at the age of 13, to begin a seven-year apprenticeship as printer/compositor with The Orkney Herald in Kirkwall. Soon after finishing, he left Orkney to begin a new life in New York. The 1890 edition of New York City Business Directory lists him as a printer.

Photography caught his imagination and he was soon involved in the production of photographic magazines. This was the time when George Eastman was developing roll film and the Kodak Box Brownie.

On 9 March 1907 he launched The Moving Picture World, arguably the most important film magazine ever. It was an independent trade paper for the industry, a journal where the latest news, technical advances, safety standard, licensing, film releases – in fact everything to do with the industry – were reported.

The magazine made an impact at a key moment in the development of the new industry, at a time when it was very different from today. Most of its power was on the east coast; Hollywood did not yet exist. There were some unscrupulous operators making money from showing sleazy films, thereby playing into the hands of anti-film lobby which sought to use these failings as a weapon against the whole industry.

Various companies were trying to seize control of the new industry by making use of patent law, intimidation and the press. But Chalmers very determinedly steered clear of taking sides. For him the whole business was about integrity and setting standards for the future. The industry needed an independent voice and a way for everyone within it to communicate with each other; which is what he provided.

As founder and editor of The Moving Picture World, he dedicated his life to raising the standards of the film industry. He saw with astonishing clarity its value as a moral and educational agent and how it had to unite and regulate itself to fight the external enemies bent on its destruction.

Even when he himself came under pressure from those trying to take control within the industry, he stood his ground and risked financial loss rather than give way.

Few men could have stood the strain, but Chalmers had back of him a long line of sturdy Scottish forbears and could take physical punishment to generous quantities. Week after week he wrote practically everything that went into the Moving Picture World and then worked over the mechanical details at the printing office, for he was a practical printer, away into the small hours of the morning. By such means of economy he was able to tide over the period of financial difficulties that beset him during the earlier days of the paper’s existence.”

The industry rapidly came to see him as a champion, an honest man of integrity who stood beyond the factions and fought for the industry as a whole.

The first issue set out the vision, right at the outset

It is the intention to give the best, and only the best, news concerning the film industry, describing briefly each new film as it is produced, taking note of its quality and giving an unbiased opinion of its merits or demerits.”

12,000 copies of the first issue were printed – and within a week, they were all sold.

The magazine flourished, and by the time of its fifth birthday in March 1912, Chalmers and his staff were celebrating great success. Offices had been opened in Chicago and Los Angeles, and two more Orcadians had joined the staff. His cousin John Wylie had become the paper’s business manager and his sister Eliza Jane the treasurer. The future looked bright; but in two weeks, it changed dramatically.

A last-minute decision to attend the Dayton Ohio Film Convention in March 1912 had tragic consequences. Wishing to view some projection equipment, Chalmers made his way to the hall’s projection box, but in the dimly-lit corridor mistook its door and opened instead that of the lift shaft. He died of his injuries.

Tributes from across America

Many leading figures from the film industry attended his New York funeral, which was filmed by Gaumont and Pathé News. Hundreds of tributes from across America and from abroad poured in to the magazine, and a large number of floral tributes were sent. His death was reported on the front page of the New York Times.

In possibly his last conversation, there was no doubt about the subject that most captivated him, as he talked animatedly and enthusiastically about the industry’s future with one of his journalists, James McQuade, outside the Dayton Ohio Film Convention.

He died just two days after the death of Captain Scott in the Antarctic, in the same year in which the Titanic would be both launched and lost. It was the year in which the Keystone Cops were launched, with Charlie Chaplin’s screen debut still two years away.

The Orkney connection to the story of film did not end there. His family, who joined him in the USA in 1892, sold their Connecticut farm and moved to New York to run his beloved magazine in his memory.

At the 10th anniversary dinner held at the Waldorf Astoria in March 1917, a specially printed programme featured pictures of all the company’s staff from New York to Los Angeles. At the top table were four Orcadians – his father James Petrie Chalmers senior, his brother John Firth, his sister Eliza Jane and his cousin John Wylie.

By now the New York business had moved from a small office at 361 Broadway and was now at 17 Madison Avenue, overlooking Madison Park Square and the Flatiron Building in Manhattan. Alfred Chalmers, the son of John Firth Chalmers, also joined the magazine sometime after the end of the First World War.

The Chalmers family continued to run the magazine for a further ten years before it was amalgamated with Motion Picture Herald in December 1927. Their only connection was then a Spanish language film paper Cine Mondial which Alfred continued to be involved with until 1950 when he sold his interests to his business partner Frank Ortega.

For researchers in to the history of the cinema, The Moving Picture World continues to be one of the greatest resources, letting us follow the story from the age of the black and white, short, one-reeler, silent film to the introduction of sound and colour. Many of the early films of that time, now lost to us, are preserved in its reviews.

The complete archived issues are now available online, including the tenth anniversary issue which looks back at the story of the founding of the magazine by James Petrie Chalmers.

He himself is buried with his family in the Kensico Cemetery, New York – along with Anne Bancroft, Danny Kaye, and the composer Rachmaninov.

In the passing of J.P. Chalmers I have lost a warm personal friend and supporter. In J.P. Chalmers the industry has lost one of its greatest figures – one who battled steadily for what was right and one who ever wielded his strength where the cause of motion pictures might be benefited.”