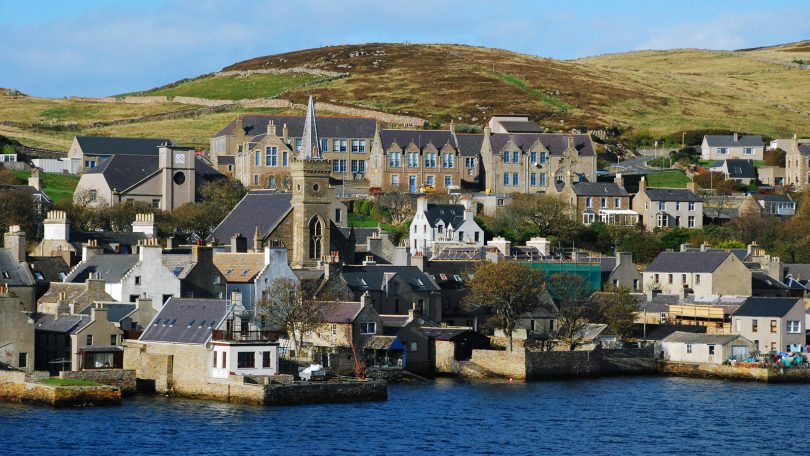 It was around 1959 when I remember reading in the Stromness and Round About column in The Orcadian about changes in the maths department at Stromness Academy. Jessie Mowat, who had taught us so well, would be joined by a new teacher, described by the paper as “a young teacher who is just finishing his training”.

The new term brought an air of expectation. What would he be like? Would someone young and starting his career be able to cope with the various classes? Within minutes of Jim arriving we were happily working away as if he’d always been there, and for the years that followed we never looked back.

What I hadn’t realised until I read his son Neil’s excellent obituary in The Orcadian in 2011 was that Jim, although young, had much experience behind him. After university he’d had two years’ national service in the RAF, stationed in the Middle East. He’d then gone to work in industry with Vickers Armstrong in Swindon, but he had started to feel that he needed to do a different kind of work and that it was time to go back to Orkney.

So when he came to teach he had experience of working in organisations and taking responsibility, and he proved to be a natural teacher and a natural leader who got the very best out of any class.

He had a real enjoyment out of the subject. When it came to a difficult problem on the board, he wasn’t in the least bothered about who solved it first, us or him. All that mattered to him was the delight in seeing a really good solution.

Euclidean geometry in particular was full of particular knotty problems, where you might know one angle in a diagram and have to work out the others. With Jim there was the joy of the chase, as we all approached the problem in different ways, and then if someone came up with a solution that really worked, he would put his head back and look at the board and look us with a kind of glow. And sometimes, if it was a particularly awkward problem, he might say: “That’s a genius of a solution!” and look even more pleased.

He would get totally involved, and I remember one day when he was recapping the various stages to see where we had got too and noting what he’d done. “I pit doon …” he said, and then paused … “I put down,” he said and gave us a cheerful grin.

His love of mathematics started at Kirkwall Grammar School, and took him to Aberdeen University. While in the RAF, he had volunteered to teach mathematics, so the combination of that teaching experience and love for the subject carried him forward into teaching at Stromness Academy first of all, and then from 1972 in Kirkwall.

His love of music had started early, listening to his father play the melodeon and also the gramophone. Jim learned piping in the Boys Brigade and soon was much in demand to play for events. In the RAF he learned the tenor horn, and after he’d left he bought a trombone and taught himself. He used to play in his brother Dave’s band, the March Hares, and I can remember hearing them at the dance and the sound of trombone and the great rhythm it brought to a band.

He played with Kirkwall Town Band for over 30 years, and in retirement from teaching became an active member of Kirkwall City Pipe Band.

He was at Stromness Academy at a great time, with Archie Bevan teaching English and Ian MacInnes teaching art, and of course it was at Stromness that he met Jean, when she was teaching domestic science there, and they were married in 1961.

Stromness had a tradition of debating which Jim relished, and he was a keen member of the Stromness Debating Society. Then when he moved to Kirkwall there was the big change from the old building to the new one, and much work to be done.

There’s a long-running debate more generally about the nature of mathematics, whether it’s something that we as humans create in our minds, or whether it’s part of some kind of deeper pattern in the world, something that we go out and explore. I’m sure that this latter picture is the case, that there a deep structure in the world, and the mathematician has an endless fascination in looking at the various pieces and wondering how they fit together, while the musician has a kind of natural feeling for the harmony and pattern of existence.

The person who combines both talents is special, and the person who does so and brings out in others the opportunity to share their joy in the subject is very special indeed.

I would ask you all to be upstanding and drink a toast to Jim Robertson.