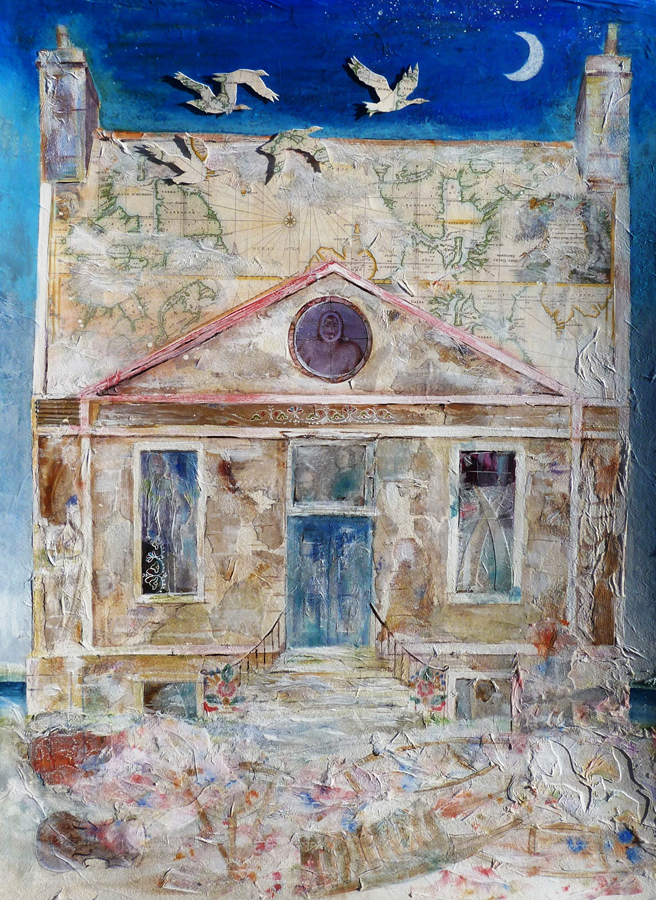 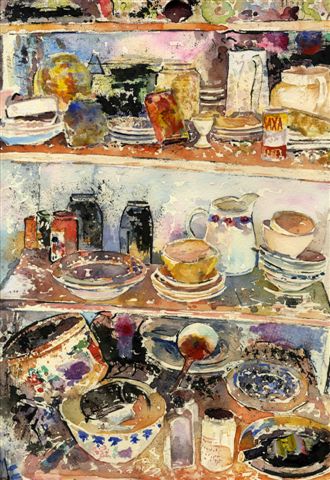 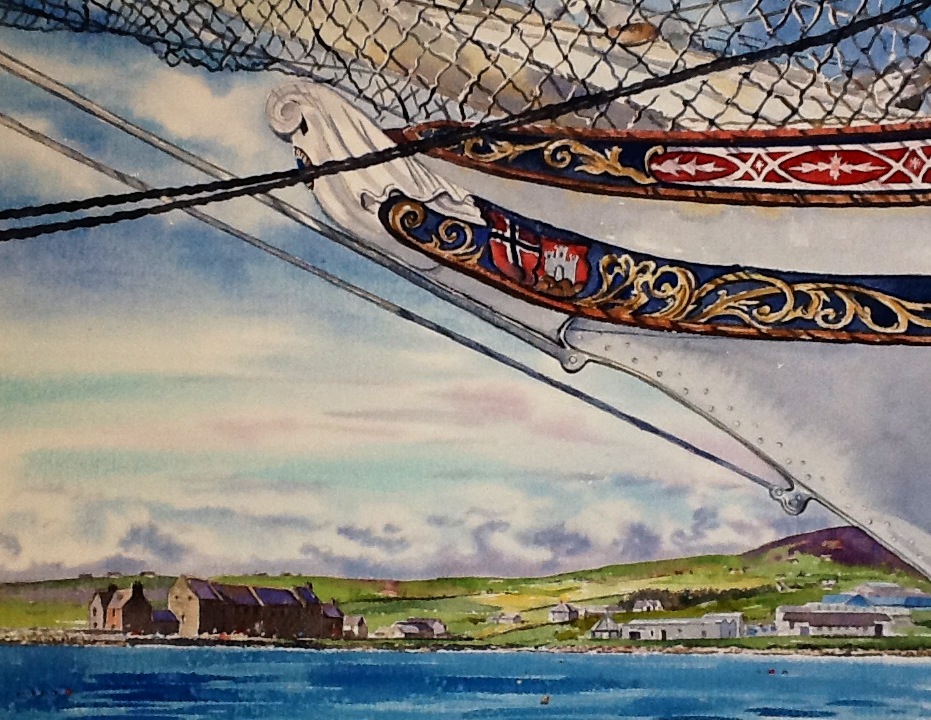 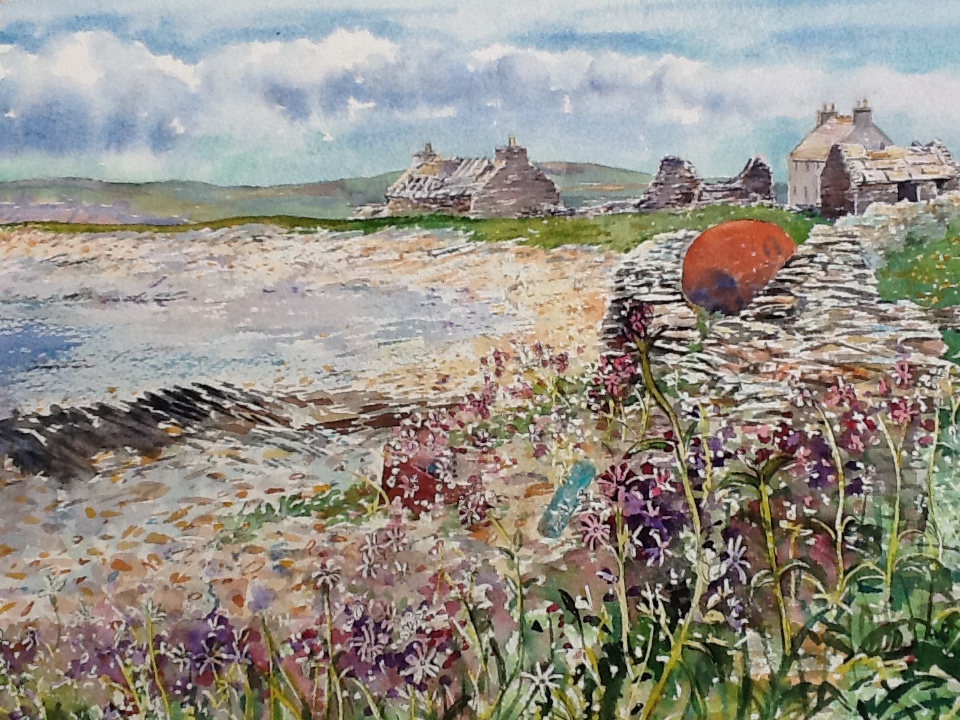 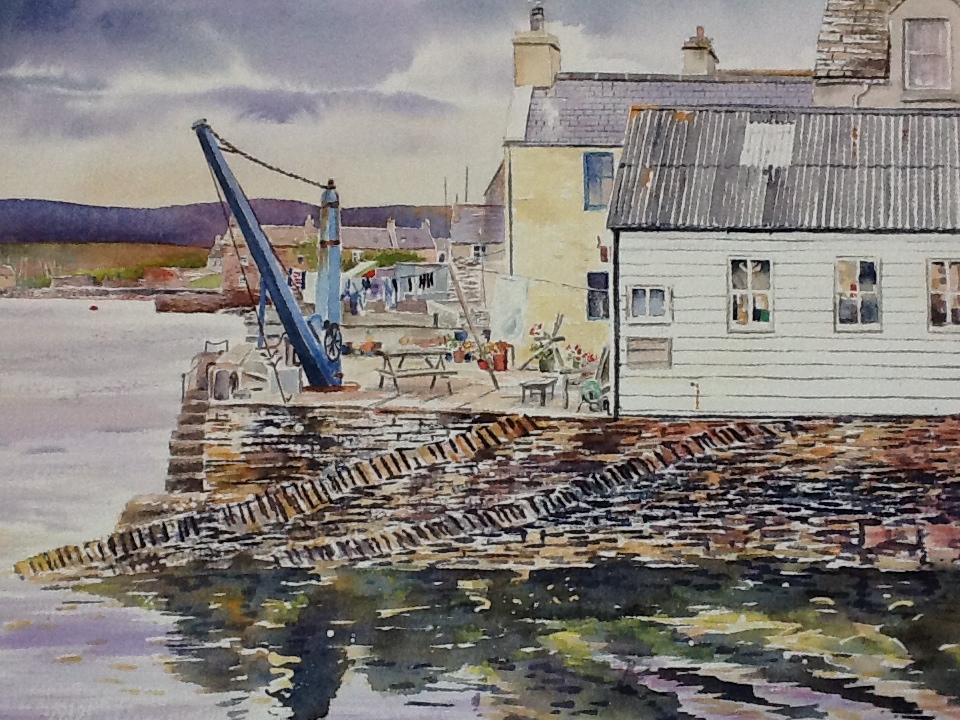 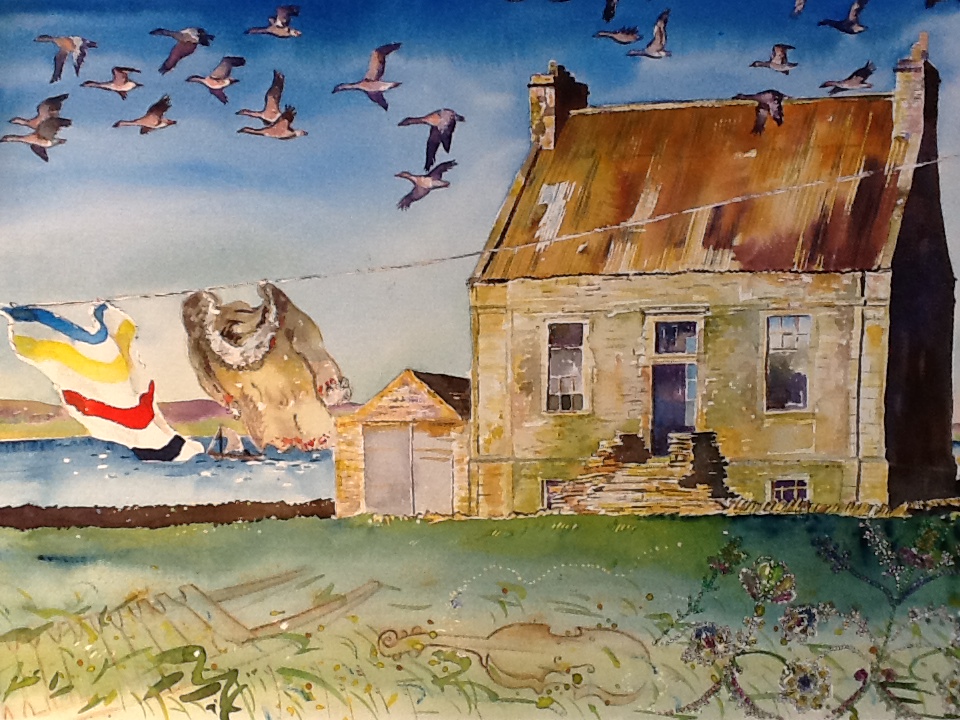 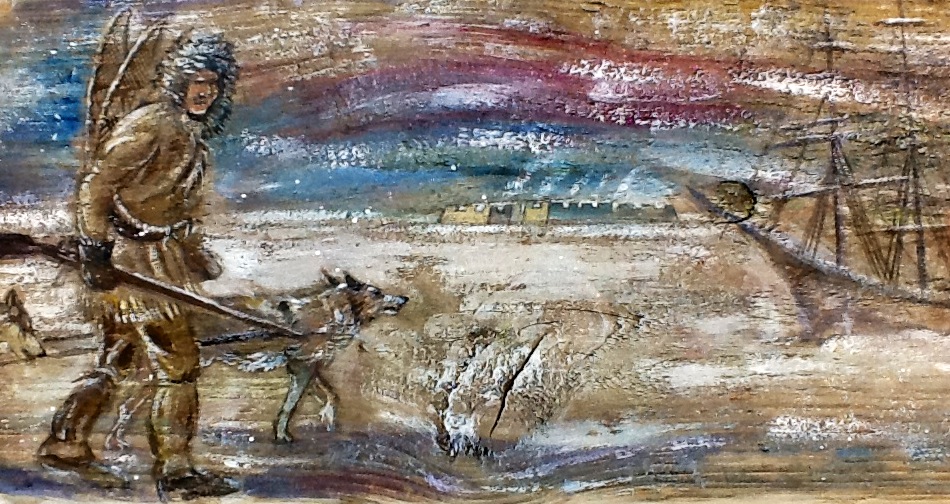 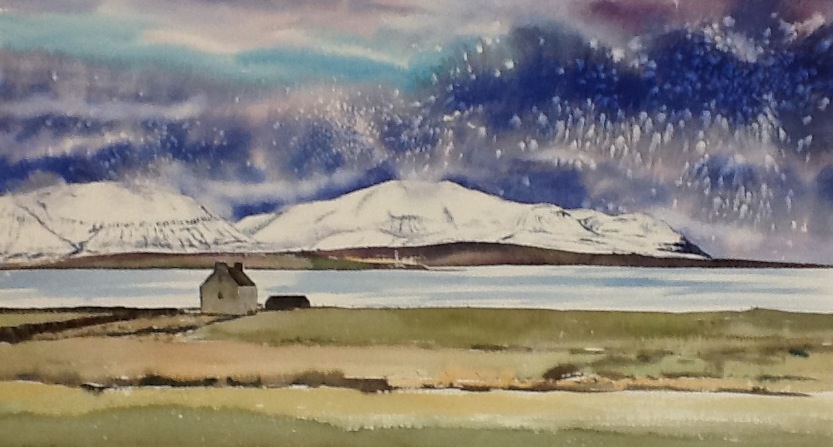 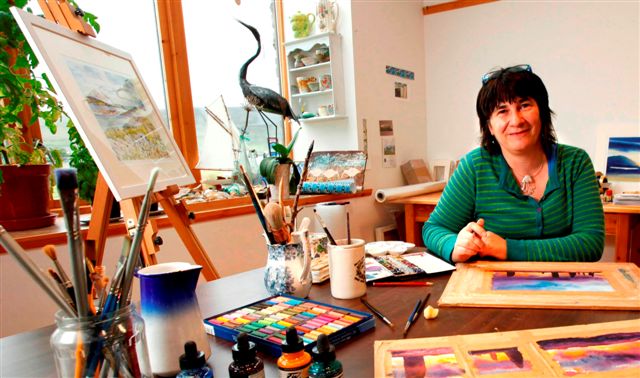 The house seemed incredibly sad with glimpses of what it used to be hidden in the stonework and architecture. I borrowed Mum’s book and I couldn’t put it down, I was hooked like her on the story of an incredible man who had achieved so many things that seemed impossible for a man in those times or even today. And what seemed to lie at the back of all that achievement was John Rae’s Orcadian roots, his knowledge of the sea, weather, nature and landscape, and also his ability to recognise that we are all equal. This was something that in Victorian times, the gentry found hard to accept. Overall it was John Rae’s ability to communicate with all people that made him stand out from the crowd and achieve what others could not, like the discovery of the Northwest Passage.

I visited the Hall of Clestrain a second time on my own to take in the atmosphere and spent some time at Stromness Museum studying and drawing John Rae’s artefacts. Even just wondering the streets of Stromness gave me a sense of him and the relationship between Orkney and Canada through the Hudson’s Bay Company which again I already knew a bit about.

I started a large painting of Clestrain in the snow and it gradually developed into a kind of history of the explorer. I used a map of Northern Canada for the roof, and hidden in the snow are John Rae’s possessions such as his sextant and sledge. Orkney has thousands of geese, many of which fly down from the Arctic. I placed geese in my painting too as a symbol of connection – and a moon. I always think that wherever you travel in the world we are all seeing the same moon!

Around about the same time I started a Facebook page for my business, Jane Glue Gallery. This was primarily to promote my business but it became more than that. Being an artist can be a bit of a lonely occupation, but now I found that through the internet I could connect with other artists from all over the world and share our ideas and work with each other.

One of those artists was Sheena Fraser McGoogan. Sheena had posted a painting of John Rae’s house at Clestrain on her Facebook page and I loved her painting! So I thought, wouldn’t it be lovely to have an exhibition based around John Rae and Orkney at my gallery, especially since the lady at Stromness Museum had told me that it would be the 200th anniversary of John Rae’s birth this year. To be honest, when I sent a message to ask Sheena about exhibiting, I had no idea that she was married to the writer Ken McGoogan or that she even lived in Canada! Anyhow Sheena seemed thrilled to be asked and agreed almost right away.

This will be the first time I have exhibited any other artist’s work at my gallery in Finstown since I opened seven years ago and I’m really looking forward to it. So far Sheena and I have been working fairly independently – I thought it would be good if we approached the task from our own perspectives so that we can create our own thoughts and messages about John Rae.

Recently I have read Ken McGoogan’s book Lady Franklin’s Revenge. I didn’t really want to read it as I didn’t warm to her, but I realise she was an extraordinary woman in her time, just a bit misguided by her status. I don’t know if John Rae will ever be properly recognised as the discoverer of the Northwest Passage but I do know that to the people of Orkney he is a hero and our most famous son. He has never been forgotten in Orkney and never will be!

I have been working on a variety of paintings for our exhibition. Several are of the Hall of Clestrain, John Rae’s birthplace. Two pictures incorporate a bit of history surrounding his life and the house, and another two pictures are views of the house with the hills of Hoy in the background. Another watercolour is of Stromness and its piers, and another is of a tall ship in Kirkwall Bay. These are scenes that John Rae would have seen in his lifetime. I’ve painted one picture of John Rae the explorer in northern Canada on a piece of driftwood that I found in Orkney on a beach after a recent gale. The driftwood made me think about the ships that were lost and broken up in the ice and the brutal conditions that John Rae and others from Orkney endured.

Two more pictures were done after a visit to the uninhabited island of Swona last year. I had always wanted to go there, and when I did it left a lasting impression on me that again seemed to connect with life in the Arctic, the harshness of life on the edge, and how adaptable humans can become to their surroundings. The last two people were taken to the mainland of Orkney from Swona in the mid 1970’s to attend the hospital. The farmhouse that they lived in was left intact as they probably intended to return. The pantry was full of food, and letters from friends lay on the writing desk. Over the years the island has gradually decayed, and due to its remoteness many items still lie around the crumbling houses. The shore is full of driftwood turned silver by the sea, and the whole island seems to be slowly sinking back into itself.

Jane Glue is an Orkney artist who has been painting the shores and sea of her native islands for many years. Her work can be seen in the Jane Glue Gallery in Finstown.