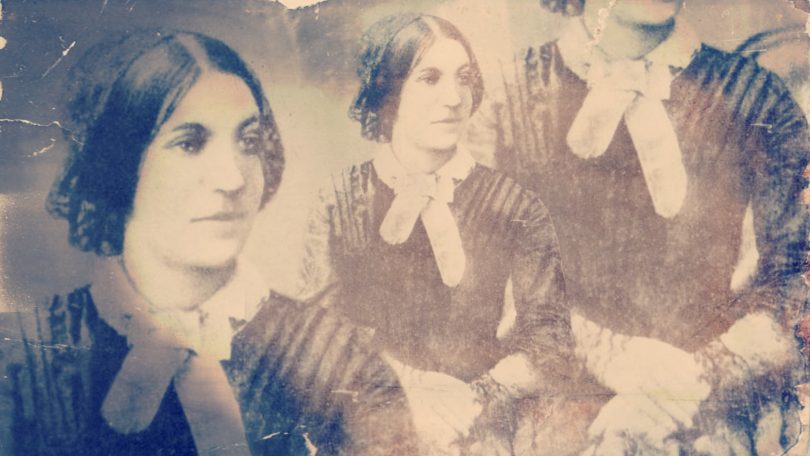 Letitia MacTavish was one such. Hargrave scouted her out: ‘her conduct as a daughter and sister has ever been of the 1st order!’ Her credentials seemed impeccable – daughter of the Chief of Clan Tavish, graduate of an Edinburgh finishing school, and, crucially, with two brothers already in Bay posts.

A year later, equipped with a set of Lockhart’s Life of Scott to enliven her voyage, she set sail from Stromness in the Orkneys, last post before Canada – and revealed for the first time her lasting gift to posterity – her skill as a letter writer. Over the next 13 years her missives, crossed and recrossed in red ink over blue ink (faded because it had frozen so often) on the lightest possible paper, (for weight cost money), reveal a trenchant observer with a wicked sense of the ridiculous. Here she is describing her evening with the local aristocracy, the Rae family.

I wish you had seen supper … at the top was an ashet of carved fowls, cold veal at the foot, rice& milk boiled together, jam and lots of preserves & spices in the said rice in a very grand chrystal dish and what looked like burnt mashed potatoes … Mrs Rae has not a tooth in her head & you may imagine my feelings when in accordance with a slight request she began to sing with her finger in her mouth to keep her tongue in …”

It was ten year before she’d experience elegance like this again. She arrived in the mosquito ridden swamps of York Factory in August 1840, queasy with morning sickness.

My first exploit on being lowered into the yawl was to turn my back on the company and cry myself sick,” she reported; but then, typically, “after which, I began to look about me, and feel less disconsolate.”

To have a writer of this quality describing the life of a Factory in a time of great and rapid change for the Company of Adventurers is serendipitous.

We get an unrivalled picture of the minutiae of day to day life, worlds away from the dry Factor’s Reports the Honourable Gentlemen in London received. Famous figures flit past; the writer R M Ballantyne (‘Bobby … a fine lad but as unfit to be assistant in a counting house as to be Archbishop of Canterbury’); the fate of Franklin discoverer and Victorian cause celebre  John Rae (‘very good looking and can walk 100 miles easily in 2 days!’). Domestic tragedies, political manoeuvring, epidemics, religious frenzies, diets and new bonnets – nothing escapes her nib.

It was, perhaps, a way of surviving isolation from her kind. She was accustomed to Edinburgh society; the taking of tea, the playing of waltzes. (Her husband made sure she had a piano, and sunflower curtain pins, in her Fort parlour.) But Letitia’s strength lies in her interest in people and her adaptability. The complicated social hierarchies of the Bay, with its mix of country wives from old established families, half breeds, new ministers and old Orkney Servants, was an intriguing  puzzle. She is non-judgmental: “Tash’s Indian servant’s organ of acquisitiveness must be large…as she seizes upon every article. Mary is frightened to reprimand her as Mrs Henderson told her that ‘Blecks’ were dangerous when angered. My Betsey never takes an article from anyone, so I suppose that must be a monomania.” – and clearly sympathetic, easing stories out of her fellow women.

I wish I cd tell it as Mrs Gladman did … Mr Stewart asked her father for her when she was twelve. She was dragged out of her mother’s room and sent away with him & he beat & maltreated her till life was a burden … there are 6 little Gladmans … from what she says the ladies here have a custom of smothering their babies.”

It was a steep learning curve. Her own experience of birth, for example, mystified the women around her – ‘the ladies here never have a doctor nor do they go to their beds but sit on their knees!’ – but it was a bonding experience. ‘A band of them came the day after he was born and asked to see the Speaking Cushion (which is son!)’

She settled into they rhythm of Fort life – frenetic activity when the Home boats, with their vital supplies and news, arrived; torpor and sewing in the winter. Children – five surviving – brought much joy, but also heartache. Her description of the death of her second child William is hard to read.

When I saw the little chest move I never as completely forgot myself … I soon found there was no hope. Poor Beppo (Joseph, her first born) … used to come looking to bewildered to my bed side & look anxiously for it – None baby, none baby, poor Mama.”

She was a staunch ally to her husband, who felt hard done by; his health was troublesome; he grew to dislike his posting, though he oversaw some remarkable feats of organisation when supplies were low and his Servants were decimated by influenza. She agonised over the slowness of news – a relative might be ‘ill’ in one letter; there was no way of knowing whether she would be long dead by the time the next boat delivered the mail. But she learned and grew.

It’s ironic and yet somehow fitting that death came once they had at last escaped the rigours of York, in the pleasant surroundings of Saute Ste Marie. A peaceful life perhaps didn’t suit her. She was only 41. Her voice, however, reaches down the centuries, making history live.

Morag MacInnes was born in Stromness, Orkney. She is a lecturer and writer. She now lives a few miles further down the road in Quoyloo, Orkney.