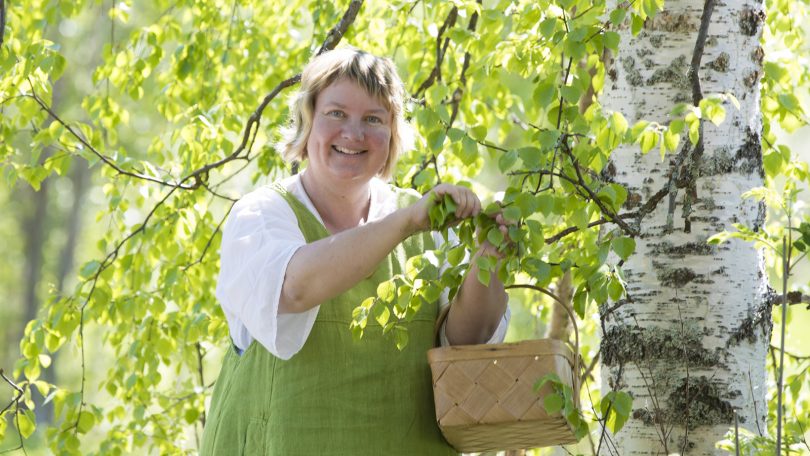 Unless you are a forager, you might not know that the early leaves of the rowan tree taste like marzipan, that shoots from the pine tree can make an awesome spice, that the saponins in birch leaves make a cleanising spring tea which is very good for the body, or that meadowsweet contains the same painkilling ingredient as asprin, but tastes much better and is good for the stomach.

And even if you are a forager, you might be surprised to learn that all of these can be collected from just inside the Arctic Circle. Yes, there is a limited timeframe of four-and-a-half to five months when these, and other treasures, can be harvested, but Eva Gunnare, who lives in Jokkmokk in Swedish Lapland, has made it her passion and her mission to encourage not only visitors, but residents of the area, to open their eyes to the bounty of the resources, and the possibilities, that are freely available right outside their doors.

As a city girl, born and raised in Stockholm, Eva was fascinated by nature, but felt her knowledge of it was lacking. At 20-years-old she decided to do something about that, and went to work at a mountain lodge in Kvikkjokk. She had no idea what to expect, the countryside was so unfamiliar, but she fell in love with it and kept returning every summer.

She also spent the spring-winters as a host at mountain cabins in the area, getting to grips with the culture and the locals, and learning from visiting botanists, who introduced her to the wild herbs and berries of the area, and inspired a passion which was to take over her life.

Her experience was deepened by her encounter with the Sami people. She married a Sami man, gave birth to a Sami son, who is now 24-years-old, and lived the Sami life for 17 years.

She was immersed in their culture, learning the very direct and pure ways of handling meat and fish, the old-fashioned methods of preserving using smoking, drying and taking care of everything on the animal, but it was their use of herbs and berries which fascinated her most.

During her summers in the mountains, and encounters with tourists and botanists, she had become close to nature, the earth and plants, and fascinated by what she had learned of their historic use as food, spice and medicine, and she knew she wanted to explore that further.

A class with Sami food ambassador Greta Huuva in Jokkmokk cemented her plans.

I was in my true element being outside, finding fresh raw ingredients and spending a lot of time in the kitchen exploring tastes and learning the traditional craft. In a way I still see myself as a visitor in this area, the more I learn the deeper my experience gets. It’s like I’ve been travelling in the same area for 25 years; I keep finding more and more the further I explore. It’s as if I am still in the honeymoon part of my relationship towards nature.”

It is nine years now since she started her own business Essense of Lapland bringing the plants and flavours from the mountains and forests to an eager, if somewhat less adventurous, audience. She even toyed for a time with producing herbal salts and other products, but very quickly realised that was not where her interest lay.

Her passion lies in being close to nature. Heavily influenced by her Sami experience, she appreciates their reverence and knowledge of the natural world – a spiritual connection.

And she would like to return to an earlier time when that connection between all human beings and nature was stronger, when we had an innate knowledge of which herbs and plants we could use.

For me during these ten years I have really started to feel things, to explore things and experience things that I’ve never done before. I think it has been a channel for me to open up some sensibility. You need to be quiet sometimes and just be out listening to the wind. Most people don’t take that time, they are out jogging and keeping fit, but what we really need to do is crawl, get our hands and feet to connect with the ground and slow down and take notice.”

This inspiration has led her to combine her passions of singing, talking, sharing stories, eating local food, exploring local traditions and experimenting in her business Essense of Lapland. Here she can share the joy she feels about living in such a beautiful part of the world in an entertaining and informative way, as well as introduce some spectacular tastes from nature.

With an extremely short foraging season and a large number of taste shows, courses, guided tours and other tasting activities on her schedule, it is crucial for Eva to take care of the plants she has foraged. Some will go directly into oil, some will be dried for tea or spices, and some will be rinsed, cleaned and frozen.

Others, such as nettles, have to be boiled first and then frozen. Preservation is key, so that not everything has to be produced at once. Products such as syrups, cordials and herbal salts can be made at any time of the year from the preserved plants.

Every plant can be used in a multitude of ways. Take the Rosebay Willowherb for instance – known as a weed in this country, despite its beautiful display of tall slender purple flowers. Even in Jokkmokk it was traditionally fed to cows and goats, but the whole plant is in fact edible to humans.

Eva explains that when the stems first appear they look like asparagus and can be used in the same way, as a green vegetable. Before the flowers appear the leaves can be used to make tea. In Finland and Russia they ferment and oxidate the leaves to make a kind of black tea, and Eva is still experimenting with her own processes. The flowers can be used to make a cordial in the same way as elderflower, or they can be eaten just as they are, as a colourful addition to a green salad. The marrow inside the woody stems can also be consumed, as well as the roots.

Angelica, on the other hand, is the most traditional vegetable for the Sami. Along with onions, it was one of the first cultivated plants in early medieval times, and was exported by the Vikings to Europe in the 1100s, where it was a valuable medicine during the time of the plague. As a vegetable it is green and celery-like. It can also be crystalised and used as a sweet cake decoration. Roots and seeds are sometimes used to flavour gin, and it provides the distinctive flavour in liqueurs such as Chartreuse. Medicinally it is good for the stomach and the immune system.

Eva collects the root in autumn to make a tincture by drying it and putting it in alcohol. She uses the stems to make marmalade together with rhubarb, and she roasts the seeds as a fennel-flavoured spice, which she uses in bread, cookies and dressings, or to marinade and cure fresh meat. She uses the leaves, which have a coriander-like flavour, for teas. Traditionally they were rolled and smoked.

Angelica grows wild, up to 2m high. It can take seven years to produce flowers and is a symbol of power, beauty and flavour in the Arctic.

My family thought I was crazy when I first moved here full time, but they understand a little now. I know what it means to be out in minus 43 degrees Celsius. I have noticed the smell of the earth returning as the spring snow melts and I have walked in the mountains during endless summer days. People think we have it very dark here in winter, but there are long dusks and dawns of purple, blue and yellow. I want to share my experience with others, to talk about different traditions and to experiment. I want to make people aware that we have a big larder outside with history and with flavours and with so much more nutrition than many of the things we cultivate.”