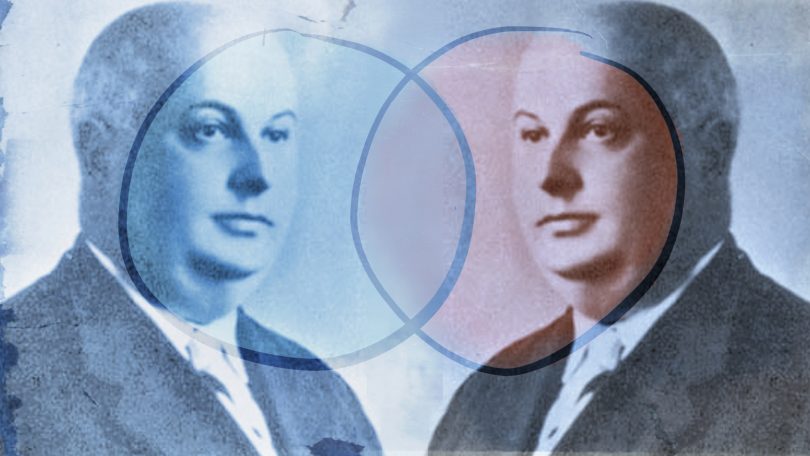 That seemed to be part of the bedrock of physics, but now it is being challenged by researchers following up an insight by an Italian mathematician. His work developed out of rethinking the equation that is arguably the most famous one in the world, Einstein’s E = mc2.

The man who looked afresh at the equation was Luigi Fantappié. Born in Viterbo, Italy on September 15, 1901, Fantappié was regarded as one of the greatest mathematicians in the world. He graduated, aged 21, from La Scuola Normale de Pisa, one of the most select Italian universities. He was a room-mate and close friend of the physicist Enrico Fermi. Fantappié won many prestigious mathematics prizes and taught in universities throughout Europe.

Fantappié had been working in the area of quantum mechanics and special relativity which both draw on Einstein’s equation, in the form:

The implications were great. The commonly-used solution of Einstein’s equation goes forward in time and describes energy caused by a source and emanating from it and dissipating outwards towards chaos and death. This forward-in-time solution describes the familiar situation of the law of entropy. But, Fantappié reasoned, there also had to be a negative or backwards-in-time solution describing energy which diverged backward in time from a future cause. Fantappié called this syntropy.

For Fantappié it had been an epiphanic moment when everything in the universe had fallen into place and suddenly made sense. He later wrote:

I have no doubts about the date when I discovered the law of syntropy. It was in the days just before Christmas 1941, when, as a consequence of conversations with two colleagues, a physicist and a biologist, I was suddenly projected in a new panorama, which radically changed the vision of science and of the Universe which I had inherited from my teachers, and which I had always considered the strong and certain ground on which to base my scientiﬁc investigations. Suddenly I saw the possibility of interpreting a wide range of solutions (the anticipated potentials) of the wave equation which can be considered the fundamental law of the Universe. These solutions had been always rejected as ‘impossible’, but suddenly they appeared ‘possible’, and they explained a new category of phenomena which I later named ‘syntropic’, totally different from the entropic ones, of the mechanical, physical and chemical laws, which obey only the principle of classical causation and the law of entropy.”

This reasoning led to his falling foul of others in the scientiﬁc community, particularly as he was never able to reproduce such phenomena in a laboratory.

It suddenly seemed as if the sky were falling apart, or at least the certainties on which mechanical science had based its assumptions. It appeared to me clear that these ‘syntropic’, ﬁnalistic phenomena which lead to differentiation and could not be reproduced in a laboratory, were real, and existed in nature, as I could recognize them in the living systems. The properties of this new law opened consequences which were just incredible and which could deeply change the biological, medical, psychological, and social sciences.”

On October 20 1942 Fantappié presented his theory of syntropy to the Academia d’Italia in a paper called ‘The Uniﬁed Theory of the Physical and Biological World’. His ﬁndings were that syntropic phenomena invert the second law of  thermodynamics:

1. Through syntropy, a reduction in entropy and an increase in differentiation is observed

3. Concentration of matter and energy cannot be indeﬁnite, and entropic processes are needed to compensate syntropic concentration

6. A new scientiﬁc methodology is needed since the experimental method can only study causes located in the past

He ended his paper by stating he believed syntropy was the essence of life.

Although Fantappié was never able to prove his ﬁndings in a laboratory, today in Rome Professor Ulisse Di Corpo and his wife Antonella Vannini have chosen to devote most of their studies and energy to the research of syntropy.

Di Corpo had postulated his own theory of syntropy in the late 1970s when some personal life-changing experiences led him to develop a ‘vital needs theory’.

Further explorations into the theory of syntropy led him into contact with Vittorio Castellano at the University of Rome, who immediately told Di Corpo that ideas of this form had already been developed by Fantappié 40 years before.

Although Castellano was supportive, Di Corpo felt no one else was interested in the subject and after Castellano’s death in 1997 Di Corpo was ready to give up his work. However, in 2001 he met and fell in love with Antonella Vannini, and life took a different turn.

Vannini at the time had no interest in syntropy, but that was soon to change when she began work on her ﬁrst thesis for cognitive psychology and came across the work of New Zealand mathematician Chris King on supercausality. Vannini took as her subject ‘Entropy and Syntropy from Mechanical to Life Sciences’. It was published in the journal NeuroQuantology. Her master thesis went on to explore further the realms of syntropy, but it was her PhD which caused the greatest stir.

It was based on the following hypothesis:

Vannini’s experiments show that heart rate reacts before the onset of stimuli, that these pre stimuli activations are strong and easy to replicate and that heart rate values change signiﬁcantly in advance to emotional stimuli, suggesting that syntropy is perceived in the form of emotions.

However, the news was not well received in all quarters. Vannini explains:

As long as the theory of syntropy was conﬁned to the realm of philosophy it was tolerated, but as soon as my experiments started to support this theory I was accused of making up the data and professors (physicists and psychologists) refused to see the data because they considered them impossible.”

Vannini says the conﬂict reached levels she would never have expected in the scientiﬁc ﬁeld and shifted from a professional to a personal level.

Nevertheless it was accepted that her work had been conducted correctly and she received her PhD. Vannini states:

Until now we have found that mainstream science is based on the assumption that causes must always precede effects and researchers who introduce the possibility of retrocausality and syntropy are automatically excluded from the academy, from publications and ﬁnancial support.”

If the theory of syntropy is correct, three levels of time must exist. The sequential time to which we are accustomed to, in which energy is divergent and entropy prevails, would be typical of expanding systems, such as our universe. On the contrary, in a converging system the ﬂow of time would be reversed as it happens in black holes. There are also systems in which diverging and converging forces are balanced, such as atoms. At this level time is unitary and past, present and future coexist.”

As Fantappié emphasised, syntropy is a concept which has enormous relevance to the life sciences, in ﬁelds such as biology, medicine, psychology and sociology. Di Corpo and Vannini are currently working with economists on the hypothesis that the ﬁnancial and economic crisis we are now in can be seen as an entropy peak which requires a shift towards syntropy.

The work on syntropy continues to face opposition, but if it turns out to be true, then perhaps one day the name of Luigi Fantappié, who looked at the second solution of Einstein’s equation, will be as well known as that of Einstein himself.

Marco Galloni, The heresy of Fantappié and Teilhard and the converging Evolution (http://www.sintropia.it/english/2012-eng-1-3.pdf)