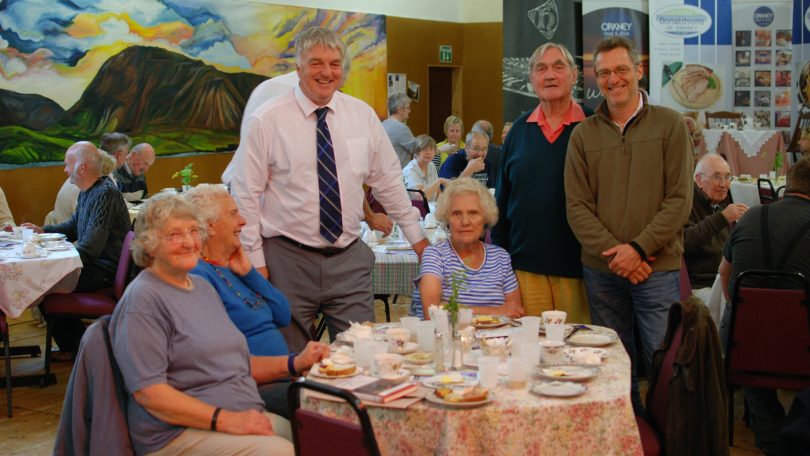 Archie Bevan’s tribute to Robert Shaw was broadcast on BBC Radio Orkney in August 1978 following the actor’s death. It was read by Archie’s son Graham as a One O’Clock Toast in the Peedie Kirk Hall in the 2016 Orkney International Science Festival, and by a very happy coincidence Robert Shaw’s brother and sister and some of their family were on holiday in Orkney at the time and so able to be present.

[dropcap]I[/dropcap] think Robert Shaw would have been about seven years old when he first came to Orkney in the early 1930s. The family settled in Stromness when his father set up his medical practice in the town. They lived in Seafield House, opposite the Bank of Scotland, the house from which Dr Cromarty later ran his medical practice for many years.

The Shaws were a lively family. Dr Shaw himself was a great outdoor man, fond of shooting and fishing, and something of a bon vivant – at least by the douce Orkney standards of those days.

Robert was two classes below me in school, an unbridgeable gulf at that age. But he was a classmate and companion of my cousin, Captain Arthur Porteous.

His schooldays in Stromness made an enduring impression on Robert Shaw. When I met him again more than twenty years later, he recalled those days in vivid detail. He was able to name his classroom friends – and enemies – and he remembered the bitterness he had felt in the early days when he was ganged up on by a small clique – headed, not by an Orcadian, but by an incomer like himself.

Those childhood years were not a tale of unbroken delight for Robert Shaw. Much later in his life he was able to recapture the joy, and the anguish, of his Stromness days in some vivid semi-autobiographical writing in his first two novels – The Hiding Place and The Sun Doctor.

Starting on the stage

The family left Stromness just before or after the start of the War. It was 1960 before Robert Shaw returned to Orkney on holiday. By this time he had established a considerable reputation on the London stage. He had just begun his career in the popular cinema with a smallish part in The Dam Busters. He had already made his mark on TV with a starring role in a series called, I believe, The Buccaneers, but this was before the advent of TV in Orkney. He had already published his first novel, The Hiding Place, a work of high promise. He was busy writing his second novel, and he told me that he had no less than seven more books mapped out in his head.

He returned to Orkney in the summer of 1963 with his second wife, Mary Ure, the Scottish actress who had made her name as the long-suffering wife in John Osborne’s play Look Back in Anger. I remember that my first meeting with Robert Shaw that year was on the Stromness Golf Course. He was playing in a foursome with some members of the local club – partnering Jim Sutherland, I think. His dark hair had been bleached to a startling Aryan blond, a remnant of his starring role as the villain in From Russia with Love, which he had just finished shooting. Of course, you’ll remember that he came to a sticky end, at the hands of James Bond, in that film, but Shaw told me that in fact he and Sean Connery were very close friends, and he had a great admiration for Connery’s ability as an actor.

Incidentally, it was on one of those Orkney holidays that the nursemaid to the Shaw family met, and in due course married, Mr George Brown, son of the late Ginger Brown.

My most vivid memory of Robert Shaw that summer was a visit we paid to Rackwick. My family was camping in Hoy that year, and we gave the Shaws a lift through from Lyness. As we turned in the valley under the shadow of the Ward Hill and the Dwarfie Hamars, Robert Shaw enthralled the youngsters in the car by launching into a delightful story featuring the Trow of Trowieglen. He was a born storyteller, with a great imaginative gift and a wonderful way with words.

He left Orkney shortly afterwards and I never saw him again. His performance in From Russia with Love set him on a road to stardom, which was to culminate in blockbusters like The Battle of the Bulge, Jaws, and The Deep, though some of his finest films never achieved box-office success.

But his great aim back in 1963 was to be a successful writer. And for a time at least it seemed that the promise of that first novel would be abundantly fulfilled. His second book, The Sun Doctor, was generally acclaimed, and won the Hawthornden Prize. It is in fact a rather uneven book, but it does have an autobiographical flavour in certain parts, particularly in his account of the hero’s return to Orkney to discover the truth of his childhood experience in the islands.

Shaw wrote three more books, including The Man in the Glass Booth, which later became a successful stage play. But for my money, his finest achievement was undoubtedly his third novel, The Flag, a work of great imaginative power. This book was to have been the first of a trilogy of novels, and Shaw’s admirers waited long and hopefully for the second instalment. Alas, we waited in vain.

Robert Shaw went on to become a superstar in the cinema, but he never quite fulfilled his promise as a writer. I do not know whether the trilogy would ever have been completed, but the fact that these books remained unwritten certainly added to the sense of loss which I shared with all his Stromness friends at the news of his sudden death last week.

The late Archie Bevan was a master of just about every aspect of the craft of using words. He enriched Orkney cultural life immensely, from his teaching days at Stromness Academy, where he pioneered the study of Orkney writers, to his major role in the development of St Magnus International Festival.