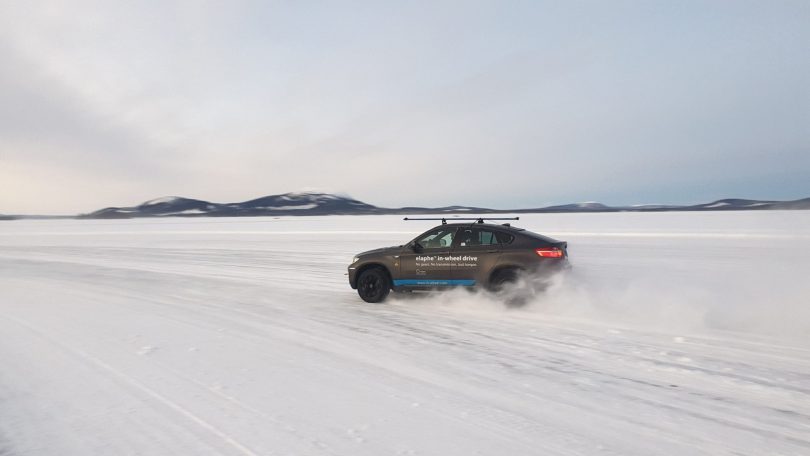 With evidence of climate change visible in all parts of the world, focus has never been more firmly fixed on developing clean, efficient, safe and aesthetically pleasing transport solutions, and that is where Elaphe comes in.

The company has developed a range of in-wheel propulsion technology systems combined with state-of-the art powertrain electronics, providing cutting-edge solutions to what car manufacturers previously regarded as almost insurmountable problems. This has enormous implications for performance, efficiency and safety, enabling wheels to be controlled individually or together for increased manoeuvrability and giving power where it is needed. Crucially this technology also solves another manufacturing problem – how to integrate high performance with dynamic design.

Formed in Slovenia two decades ago by Andrej Detela and Gorazd Lampič, the vision of this winning partnership has over the years provided a magnetic attraction to like-minded talent and it is important to Andrej and Gorazd that their workforce shares the same vision of a high-quality, revolutionary product with a concern to improve life and the environment.

Even the company name, Elaphe, has a holistic background, originating in ancient Greece and incorporating the symbol of the ouroboros – a snake eating its own tail – symbolising rotation, constant movement and a yearning for something better.

As an entrepreneur, Gorazd felt it was a natural step to join forces with Andrej. They already shared a keen interest in science and nature, and Gorazd was looking for a project which would have a positive impact on the world rather than something which was simply a money-making venture. It was also a leap of faith.

It was certainly visionary when we began, but this vision was backed by very solid mathematical effects, so it was not difficult to convince me because it made sense. Why have a propulsion in the centre of the car if you can develop the technology to put it exactly in the place where you need it? You need the force, you need power, you need torque inside the wheel because this is what moves. You don’t need it in the centre of the car, so based on the understanding of physics and mechanics and materials it’s clear that this has potential.”

While Gorazd initially believed the business would take five years to develop, two decades have now passed and it is continuing to grow and advance. He agrees that the first step was visionary, but he does not think it was a risk.

During the early years they were sustained by a series of immediate successes – proving the practical viability of the theory and constructing functioning prototypes which attracted investment and industry validation. They are now leaders in their field, working with global car manufacturers and providing fierce competition to others in the business.

Such advanced concepts are technically challenging and some competitors have fallen along the way, but Gorazd stresses it is not just about focusing on one thing – the motor for instance. It is also about the process of how everything fits together, the electronics, along with testing, developing and integration into different vehicles. In some cases competitors have become partners, working with Elaphe and sharing the vision of a brighter and better future for all.

The end point is not fixed. It is continually moving and pushing the company forward in line with its vision. While the early years were dominated by theoretical development, the second decade has focused on practical application.

Had they focused on a short-term business plan and immediate financial benefits then yes, it would have been a risk, but the whole developmental process, the fact they knew they were doing something good for humanity, the opportunity to educate others on the way, and the ability to keep pushing the technology ahead was inspirational. They learned through the process, improvements were tangible, and everything came together.

It has to be the right time, both from the market perspective as well as from the technology matureness perspective, because 10 years ago car makers didn’t need an advanced solution with motors inside the wheel. They were perfectly happy and very busy with conventional architectures where you have a central motor or axle motor and then mechanical transmission connecting the motor to the wheels.

But now when everybody already has electric vehicles, there is actually a market need for something new, for something where they can get additional benefits in terms of putting the propulsion parts into the wheels and having more space in the vehicle, enabling more dynamic shaped vehicles, more comfort and freedom in design, reducing the battery size.

At the same time, from our bottom-up development of those technologies, the motors or electronics that we have, or have with partners, are more mature now that they can integrate into their development processes and later into the vehicle. So it has to be really a combination of multiple things that fit together.”

Having already achieved the vision of becoming the top choice in-wheel motor technology company for the automotive industry, Elaphe expects to see vehicles which use its technology available on the market within the next three years. Right now, that could be anything from a small car and right through the range to a pick-up truck or large SUV.

But the vision does not stop there. The company believes its technology could also revolutionise passenger and commercial vehicles and is already working on some projects as well as setting its sights on marine and air vehicles.

The requirements for wheels on road vehicles are very similar to the requirements for a propeller in terms of rpm, Gorazd points out, so with the emergence of new types of vertical take-off and landing vehicles, and electric aviation in general, the market is well-suited to Elaphe technology.

I think the market has shown that we are the leaders for this particular type of multiple-drive solution with in-wheel motors and we will try to continue in this way. We know what we need to do and what customers are asking and expecting, and we try to develop those things in advance. But the size of the projects now is different to what will be in a few years, and we have to grow with that and with deeper knowledge, wider knowledge, so it’s not so simple to keep the leading position.”

But Elaphe has no plans to relinquish the top spot, continuing to adhere to its own philosophy of organic growth in combination with step changes, sometimes fueled by equity investment, sometimes by the acquisition of a large project.

We will continue to do things in advance, things that the industry might not yet know that it needs but we know it will be needed.”