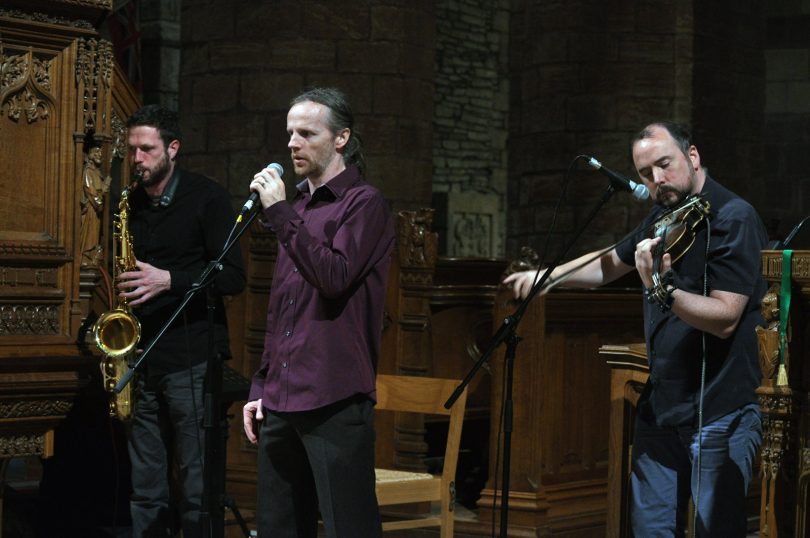 Yet he is not as well-known as he might be. Perhaps with his work spanning mathematics and physics, workers in one field associate him more with the other. Also his own life did not fit simple categories. He lived in prosperous middle-class Dublin but he wrote poems about the night and the stars and a theme of lost love that came back to haunt him in later life.

And in this year’s Orkney International Science Festival, musicians from his native Ireland joined the search for the roots of his inspiration. Lorcán Mac Mathúna is a singer and composer with a deep interest in the origins of traditional music, going far back into the roots of culture.

He has caught and manifest for us a sound which is fundamental; which has existed since men and women first sang – sang to express what they felt and what they knew to be true,” said an attendee at a past event. “It is the music of mythology – all the cadences of history and prehistory residing in one man’s voice.”

With him was fiddle player Daire Bracken, whose work in performance and teaching has covered tours and projects with some of Ireland’s best-known bands; and Eamonn Galldubh, All-Ireland champion and teacher and composer, on uilleann pipes and flute.
The three musicians came to Orkney to collaborate with scientist and writer Howie Firth on Hamilton’s story, with musical sequences interwoven with the narration and readings by Orkney actor Dave Grieve.

On the surface, Hamilton’s life fits a pattern – one shaped by pure brilliance. By the age of ten he was reading books in Latin and Greek, Hebrew and Sanskrit. In his mid-teens he was taking the entry exams for Trinity College Dublin, and by the age of 22 he was a professor of astronomy and Royal Astronomer for Ireland.

His work in mathematics and physics led to the Royal Society’s Gold Medal and a knighthood, and to the presidency of the Royal Irish Academy. But while in life and habit he was very much part of the establishment, there were other currents below the surface.

He wrote poetry, and was a friend of Wordsworth and Coleridge, and indeed it was Coleridge’s ideas about the nature of time were a starting-point for his development of quaternions, mathematical elements that underlie our everyday world of time and space.

To be able to make use of quaternions, he had to find a way of multiplying them together, and this proved difficult. Every day at breakfast time his son would ask him if he had found a way to do it, to receive a sad shake of the head, But then one day, crossing the Royal Canal with his wife, he felt a spark flash across his mind and saw what to do – and was so delighted that he took a knife and scratched the formula on a stone of Brougham Bridge.

And when we look at his family background, in fashionable Dominick Street, his father was a lawyer, but the man whose name he gave to his son was Archibald Rowan, who had been one of Wolfe Tone’s United Irishmen. And his mother’s family, the Huttons, included Annie Hutton who fell in love with Thomas Davis, who campaigned for Irish unity and wrote the song ‘A Nation Once Again’. They became engaged in 1845; six weeks later he died from scarlet fever.

Hamilton’s friends over the years included the novelist Maria Edgeworth who combined a love of Irish culture with belief in radical reform, and Lady Jane Wilde to write poems of passion for Ireland in its terrible years of famine.

And he himself knew heartbreak when as a student he fell in love with Catherine Disney, from a landowning family, and her father prevailed on her to marry instead a well-off older clergyman. And then after eighteen years, in the last weeks of her life, they met again and could finally say all they wanted to each other; and two weeks later she died.

So the sadness and the passion in Hamilton touched currents that flowed very deep, and brought him close to other levels of existence. And the sadness that breaks the heart can also, by separating us from the joys of this world, make us more able to step into another world, as in the old Irish stories of a door opening in the green mound, or of turning into a swan to fly high and beyond, and that is where Hamilton travelled in his mathematics.”

The heartrending passion that there beneath the surface in Hamilton’s life was wonderfully expressed by the music composed and arranged by Lorcán Mac Mathúna – as we can hear on this SoundCloud track from a rehearsal.

The three musicians rounded off the day with an evening of music in The Reel, the music centre developed by the Wrigley Sisters. Then on Sunday the theme switched to the story of Clontarf, the battle fought on Good Friday 1014 with almost apocalyptic fury by Norse and Irish armies. Both leaders – the Irish High King Brian Boru and Earl Sigurd of Orkney – died in the conflict and the Irish chroniclers likened the slaughter to the action of reapers in the harvest field.

The chroniclers were precise about the time when the battle commenced, at sunrise and the peak of the tide, and a 19th-century scholar made tidal calculations to confirm the accuracy of the old accounts.

The story was narrated by Dave Grieve and Ragnhild Ljosland, who directed Orkney Children’s Theatre Club in sequences to accompany the musical interludes. The music and the choreographed sequences provided vivid illustration of key parts of the battle, with beautifully-timed slow motion sequences of life and death, as here:

The production built up to a climax with Lorcán Mac Mathúna’s composition The Walls of Dublin sung by the great Scottish traditional singer Sheena Wellington:

Then on Sunday evening St Magnus Cathedral was the setting for a concert highlighting Ireland’s long tradition of learning and culture, from the hermits in lonely wooded or rocky places to writers like George Bernard Shaw and physicists like John Bell. The Mayfield Singers and Paisley Abbey organist George McPhee joined with the three Irish musicians, with readings by Dave Grieve, and then came the closing sequence of The Walls of Dublin. First came the voices, gently, sweetly, echoing through the Cathedral, then the fiddle, and the uilleann pipes with the cries of lamentation; and then the deep powerful tones of the organ joining the great tapestry of sound.