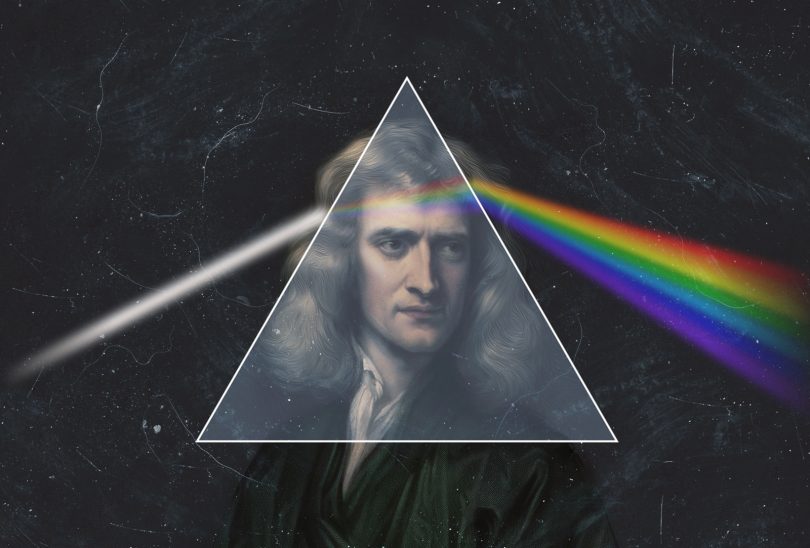 In August 1665, Newton would have seen the wagons and the searchers making their way around the streets, their bells tolling, carrying the sick and the dead on carts past Trinity and down Jesus Lane to the pesthouses out on the common. He would have watched the strange effects of light through billowing smoke as the wind blew through the city’s empty streets, a wind blown across the Fens from the Urals. Cambridge would have been surreal that summer: embattled, boarded-up windows and gateways, tolling bells and silences, smells of brimstone and pitch.

For a man, sleepless, half-starved, and with his eyes burned and exhausted from experiment, a man whose imagination was fired by thoughts of Apocalypse and prophecy, the city must have seemed like a vision from Revelations. At a time when for many others the four horsemen of the Apocalypse were virtually at the gates of the city, it was as if the plague simply did not exist for the young philosopher. He saw it, perhaps even felt his own fragility in it, but fragility was no more of any consequence than the pain in his eyes caused by the optical experiments.

Newton stayed because he was not finished; his questions were still unanswered. He would not leave his laboratory rooms where his optical notes and mathematical papers were laid out with minute calculations and summations of infinitesimal arcs of curves and algebraic symbols, not for the four horsemen, not for anything. Believing in spirits as he did and in the miracles of alchemy, and watching his own extraordinary success, he must have felt that something divine was passing through him, perhaps even that it had conferred immortality on him that would protect him from the plague. But he had also reached the limits of what he could do with his own eye. Now he needed a prism to answer new questions he had framed about the composition of colour. The prism would come to him if he waited – some of the finest glass sellers in Europe would converge on Stourbridge Fair in late August.

In the middle of that first summer of plague in Cambridge, Isaac Newton bought a prism at Stourbridge Fair. One of his relatives recorded that memory many years later.

In August 1665 Sr I, who was then not 24 bought at Sturbridge Fair a prism to try some experiments upon Descartes book of colours and when he came home he made a hole in his shutter & darkened the room & put his prism between that & the wall found instead of a circle the light made ……………… with strait sides & circular ends &c. wch convinced him immediately that Descartes was wrong & he then found out his own Hypothesis of colours thou he could not demonstrate it for want of another prism for wch he staid till next Stourbridge Fair & then proved that he had before found out.”

Puzzlingly, Newton remembered buying a prism at Stourbridge Fair in the year that the records show the fair was cancelled because of the plague. But, given that the cancellation was not announced until August, it is likely that many of the traders who came by water, setting off from their homes in Europe long before they could possibly have heard about the outbreak of the plague, would have continued sailing the Fen waterways to the north, reaching Stourbridge Common without coming anywhere near the city, or its watch and ward. The Aldermen might then have taken the view that so long as the traders stayed out of the city, the fair posed only a moderate health risk to the citizens of Cambridge given that most of the students and fellows had already left in July. So Newton stayed to buy the prism and wander through the curiously empty and depleted fair, and when the sun’s lowered elevation in late August or September brought those first optical experiments of 1665 to a close, he returned to his hometown, Woolsthorpe, where sometimes in that autumn or the following autumn, in his mother’s orchard, he determined the basis for the law of gravitation.

Rebecca Stott’s work, in radio writing, fiction and non-fiction, weaves together history, literature, and the history of science. Her family memoir In the Days of Rain won the 2017 Costa Book Awards in the Biography category. She was, until her retirement from teaching in 2021, Professor of Literature and Creative Writing at the University of East Anglia. Her new novel, Dark Earth, set in 6th-century Roman Britain, will be published in the spring/summer of 2022.