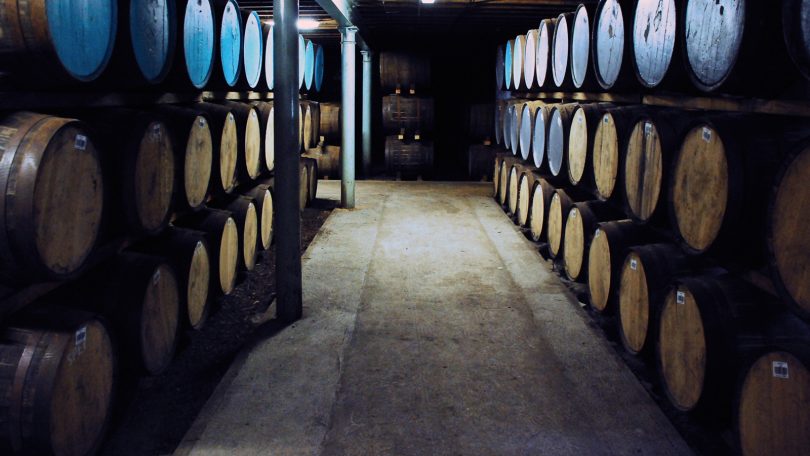 When we are appreciating Scotch whisky we use lots of our senses, with smell being one of the most important; I can spend up to 15 or 20 minutes just nosing a whisky before I taste it. The aroma can pre-empt what you are about to taste and in my opinion the nose is just as important as the palate.

To date we have identified hundreds of chemicals in Scotch whisky, maybe even over a thousand. These all contribute to what you perceive as you nose a whisky. Most of the aromas come from the fermentation, distillation and maturation processes. In my opinion it is during the maturation period that Scotch whisky gets most of its distinctive aroma profile.

From the oak to the glass

Before spirit can be called Scotch whisky it must be matured in an oak cask (with a size of less than 700 litres) for a minimum of 3 years in a warehouse in Scotland. During this time compounds leach out from the oak into the alcohol, resulting in chemical reactions that alter the character and flavour profile of the whisky. Flavour compounds are removed, changed or introduced during these silent yet vitally important years in the warehouse.

Oak is a wonderful wood in that the whisky cannot leak out but can extract some of the wood chemicals. It also allows the whisky inside to breathe, allowing air in to increase oxidation processes within. Different oak species contain different quantities of chemical compounds, and can produce whisky with surprising differences.

Quercus Alba (American oak) and Quercus Robur (European oak) are the two most common species of oak used in the Scotch whisky industry. Each species obviously has a range of similar compounds (cellulose, hemicellulose and lignin for example), yet with varying amounts of each compound we get varying effects and flavours in the final whisky.

Let’s take another compound as an example. Oak has a molecule known as whisky lactone (or 3-methyl-4-octanolide to be exact) as part of its make up. Whisky lactone comes in two forms or isomers, one is known as cis-lactone and the other is trans-lactone. Both have an aroma similar to coconut, but one has more spice and the other also smells of vanilla.

American oak has a higher concentration of both types of lactones than European oak. So all other things being similar a whisky from American oak casks is more likely to smell of coconut and vanilla when compared to that from European oak cask.

Lignin is another important compound when we are discussing the flavour profile we can smell in whisky. Lignin is degraded into various compounds such as sugars, aldehydes and acids. These combine together and with other chemicals in the whisky to give lots of flavour compounds.

For example we get floral and rose aromas from phenyl ethanol and smoky and clove smells from guaiacol; two compounds released from lignin. We also get vanillin and vanillic acid, which obviously give us vanilla aromas.

I have had the pleasure of nosing (and tasting) maturing product from a number of sites now where the only thing different was the type of cask and the difference in the whisky is amazing. If you put the same spirit (same fermentation and distillation profiles at the same distillery) into different casks (European and American oak) you get completely different whiskies.

This is something we aim to highlight at the Nosing School at this year’s Festival. Distilling companies will use these differences to produce a range of final products, producing final whiskies to suit customer likes and requirements.

I do numerous nosing and tasting sessions throughout the year and I nearly always see people fall into one of two camps with the whisky that they enjoy. I call them ‘sherry heads’ or ‘bourbon heads’.

Now these general rules do not always stand, but you can nearly always tell the type of cask used for maturation when you nose a Scotch whisky.

The good thing about nosing a whisky is that you cannot be wrong. Because of the complex nature of whisky and the physiological differences in all of us, we can perceive smells and aromas differently from one another.

I nosed a lovely whisky recently and the three strongest aromas for me were emulsion paint, wet leaves and peaches. Now this may not sound very nice but for me it was what I perceived and it was wonderful (and it tasted great as well).

I’m sure if you nosed the same whisky you would get different aromas and in that sense you would also be correct.

Nosing whisky is fascinating and fun and an integral part of the overall appreciation of Scotch whisky. Next time you have a wee dram, savour the aroma first.

Vic worked for 23 years with Diageo, mainly in production management and process support, leaving last year to pursue his passion as a minister. Alongside this he runs a consultancy business providing services to the malting and distilling industry, and independent malt whisky nosing and tasting sessions. He is also the Whisky Lecturer for the University of the Highlands and Islands, and helps run the renowned Whisky School at the Speyside Whisky Festival.