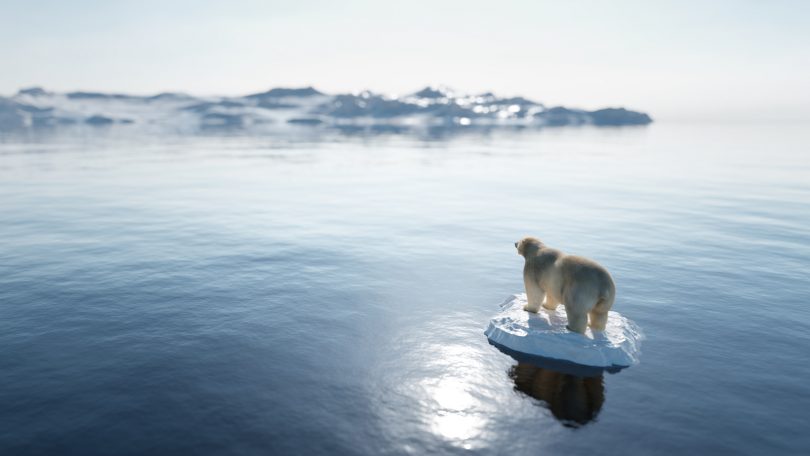 Scottish winters are warmer than they should be for this far north. Orkney has the same latitude as Leningrad or southern Greenland – yet its winters are very different. The reason is the warm water from the Gulf of Mexico – the Gulf Stream. It brings Orkney’s winter temperature up to the average for Genoa or Venice. The winters are still chilly, and on a grey November afternoon with a raw wind and driving sleet it can feel bleak indeed; but it doesn’t often freeze, and certainly never gets down anywhere near Leningrad’s record winter low of minus 36 degrees C.

The Gulf Stream is part of a global circulation of water, spreading heat around the planet. It flows north and mixes with the cold waters of the Arctic. A vital area is the neighbourhood of the Odden Tongue, a vast 1300-kilometre-long spur of ice that formed each winter in the Greenland Sea. Around it the flowing waters of the Gulf Stream were chilled and sank down in the sea, where they were caught up in something remarkable – a vast whirlpool called a “chimney”.

Once those chilled waters reach the ocean floor, they can flow along it back to their starting-place in the Gulf of Mexico – and so the circulation of the great Atlantic central heating system can continue, spreading warmth to us along its way.

But the Odden Tongue stopped forming in 1997, and the four chimneys of that year are now down to one, and it is failing. The water is not sinking so well to the ocean floor. To sink properly it needs to be cold and salty. For the formation of the Odden Tongue each winter the new ice came from fresh water, leaving the salt behind, ideal for sinking and onward flow. But now the meltwater from the Greenland ice is making the Arctic sea less salty and less able to fall down to the ocean floor. If the water in our central heating can’t find its way back to the pump, then the system fails – and that’s what the latest research this week is confirming. It comes from Germany’s highly-respected Potsdam Institute for Climate Impact Research.

It’s already known that the circulation is at its slowest for 1,600 years. The new study says that it’s getting close to a shutdown. They can’t say when: it might be a decade or two, or even a century. It might not. And the implications of that are – literally – chilling. A shutdown of the North Atlantic Circulation takes us into the territory of science fiction.

In fact, one very able science fiction author has already depicted it. Back in 2005, Kim Stanley Robinson told the story in Fifty Degrees Below, the second of a science-and-politics trilogy. It’s a book about people and organisations working together to piece together practical solutions, which for the ocean circulation means a massive conversion of older oil tankers for bulk salt cargos, and a global operation to dump salt in the Greenland Sea.

One man who says that the time has come to look for big solutions is the man who discovered the swirling chimneys of water that provide a key Arctic component of the North Atlantic Circulation. Prof. Peter Wadhams of Cambridge University is the world’s leading expert on sea ice, who has visited the polar regions more than any other living scientist. He has travelled under the ice as well, in Royal Navy submarines, to get upward sonar measurements of ice thickness.

Peter Wadhams says the only way to avert the consequences of Arctic ice melt is to go to the source of the problem. The failing polar circulation and the wildfires burning out of control are some of many signs of a climate that is becoming destabilised – and the root cause is the rising level of carbon dioxide in the atmosphere that is trapping increasing amounts of solar heat like a greenhouse. We have to find ways to remove some of this greenhouse gas, he says, and he spells it out bluntly.

This is the only thing that we can really do to save the world, so we had better do it while we still have the technical capacity and the civilization to sustain it. It is a problem in chemistry, physics and technology, a giant problem, but not one that is greater than that of building a huge bomb out of a reaction which previously was only observed among single atoms on the laboratory. It is the most important problem that the world faces. If we solve it, our human civilization can continue, and we can devote our energies to all our other myriad challenges, from overpopulation to water and food shortages, disease and war. If we don’t solve it, we are finished.”

A century ago, in the days of the great sailing ships, a favourite boys’ book was called Nailing the Colours, and in one scene a young boy on his first voyage is up in the crows’ nest as a lookout and sees the shape of an iceberg ahead. In desperation, his voice almost lost in the gale howling around him, he shouts down to warn the master of the ship

The captain in the story didn’t know what to make of it; but acted. Will we?