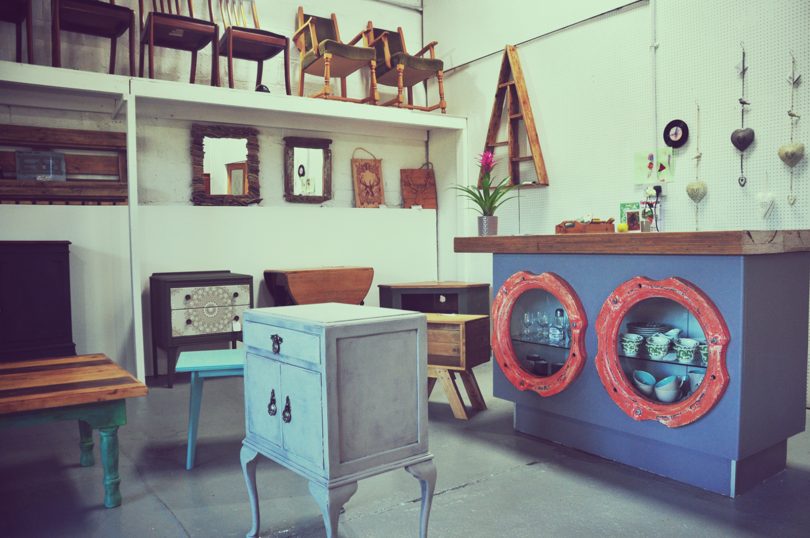 Tables, chairs, sideboards, chests of drawers – all of them off to the dump and buried in landfill when we redecorate the house. Not so, says the owner of one creative Moray business: old furniture can have a new life.

Deb Wright of FunkyFurbish in Forres sands it down, paints it, reshapes it – into something new and fresh. She sees potential for furniture in other materials as well. So discarded wood pallets are sanded and varnished and cut into coat racks and shelves, and a laminated roofbeam become a cabinet top. Windows at its side, like portholes of a ship at sea, turn out to have started life as clamping brackets for joining waterpipes.

I aim to use everything,” she says. “Everything gets turned into something. I go to auctions, and people come in with items. I’ve always got my eye out for interesting things.”

She transforms discarded furniture, whether for sale to someone new, or as a commission from the owner who wants it regenerated.

I want to make it easy for people so they don’t have to throw everything away. I want to show you don’t have to throw it away every time you change your decoration. A lot of older furniture was built to last, with proper dovetailed joints and proper wood, not chipboard, and if it’s worked on, it can be turned into something new that will last.”

She uses skills that she has built up over time, going back to her childhood on the west coast.

My dad was a builder and decorator, he was a artistic man, and I often used to go with him to work. I was always painting for him, and I remember when I was about 9 or 10 helping him rewire a house. So I grew up in a creative structured environment and I learned a lot of old skills.

Then I moved south and in the late 80s and in the 90s I was in London and I joined the Mutoid Waste Company. This was a group of young people who took over empty warehouses as a place to live and for music events. They made things out of waste materials. It was really about surviving using scrap, doing it from necessity. Their approach was: ‘Mutate and survive.’ They made artworks, like giant welded sculptures from waste materials, or customising broken-down cars.

Groups like these started as squatting, and then the people who owned the empty buildings found it was an advantage to have them there, as they looked after the buildings and kept them safe from vandalism, and over time they developed into housing co-ops and got licences.

That’s where I started to make things, and I was into music as well as art. I went with the group to Italy, and also Germany on the way.

It was a strange time, with people moving out of the East into the West for work, and artists moving into the empty spaces in the East. It was the contrast that amazed me, the obvious difference between the old east and west. I felt privileged to have seen it both ways.

I went back to London and did a degree in environmental science at the University of North London. I’d been to Moray before, I’d come up on holiday, and I found a shop in Hopeman and started up there, and as it developed I needed a bigger place and found one in Burghead.

I got lots of commissions and needed more space, so now I’ve moved to Forres.

Funky Furbish is situated at 5 Orchard Road in Forres, with a varied range of upcycled furniture on view and space in which Deb plans to open up additional activities.

I want the space to be also for other people to utilise, so I’ve got one area where someone shows retro kitchen items, and I’m going to make wall space available to photographers to rent out, and space where people can display other upcycled items. I’m also putting in shelves for crafters. I’d like it to be a kind of creative hub, and there’s also an area for people to sit and have a hot drink, as they think about what they might like.”

I had a family heirloom, a big chest which was covered with many layers of white paint which Debbie stripped down to the bare wood and then waxed. It came up beautifully and is now established in the sunroom.”

I would like to say a HUGE Thanks to Debs for my sons Tardis bookshelf. It’s absolutely amazing. It’s been the first time I’ve seen him speechless…”

You can find more information on www.facebook.com/funkyfurbish.