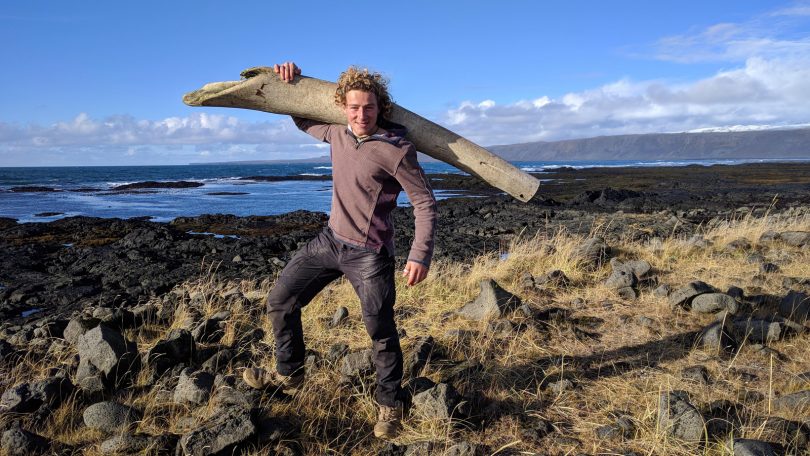 I’m nothing more than someone who is trying to gain an understanding of my past history through learning the skills that have enabled us all to be here standing on this earth today.”

These words come from 19-year-old Zeki Basan who on 5 September will be giving the opening presentation in this year’s Orkney International Science Festival.

Zeki, who divides his time between the moulded domes of the Cairngorms and Iceland’s rugged volcanic mountains, is a seeker after the old ways in a modern world, fascinated not only by what it means to survive in the wilderness, but also to thrive in harmony with it.

these really thin, small people, who are made for crawling among the thorny bushes. They are sleekit and beautiful to watch in their environment, but they wouldn’t belong in mine. They wouldn’t cope with the winters we get here, just as I struggle in theirs – this big western man. If there is any environment I shouldn’t be in, it’s that one!”

Nevertheless it is a place and a group of people he feels drawn to, intrigued by their way of being, how they live and move, how they fit perfectly with their environment and how, despite the troubles they have gone through, they are still hunting and gathering to this day

In fact it is how they hunt, prepare and cook spring hare that has informed Zeki’s own practice, and one he now passes on to others. So although from vastly different environments and terrain, there are certain skills that fit well in both the Scottish wilderness and the Kalahari.

Living in the wild

The foundations for Zeki’s current interests were laid in childhood, living off the beaten track with his mother and sister, in a property which was often inaccessible during winter, unless by cross-country ski. His mother, Ghillie, not only taught her children how to cope in the wilds of Scotland, but also took them abroad regularly, visiting and staying with remote tribes, while she studied food and recipes.

It was seeing how people lived in relationship with the land that inspired Zeki and this is what he loves to talk about, the variety of skills people use to live solely on the land without the usual material comforts. It’s a far cry from the modern idea of going into the wilderness in an off-road vehicle stuffed full of every modern convenience apart from, or sometimes even including the kitchen sink!

If you are willing to put up with a lot more in the way of hardship, bad weather, being wet, being cold, being hungry and sort of power through that, then your basic needs aren’t really a lot. It comes down to the simplest of things – fire, food, shelter and water. These are the only things you need.”

The emphasis, he says, is not struggling against nature, but learning to live in relationship with it and getting to know the land, becoming as familiar with it as the back of your hand, in the same way as our ancestors did thousands of years ago.

That’s quite lost these days. People don’t really know their environment. If they can’t get to it on a quad bike or in a vehicle they don’t really tend to explore it, but to really know your own environment, be aware of everything that’s there and know what you are going to encounter in the next 50 miles is quite an incredible thing.”

As a glacier guide in Iceland Zeki spends a lot of time doing just that – exploring the land and the coastlines, seeing what the potentials are and working with materials like whalebone, a hugely valued resource for the variety of tools that can be made from it. Knitting needles, fish hooks, harpoons – all the tools needed for hunting come from this one source.

Similar to Orkney, Iceland is an island community without trees, and highly dependent on the coastline. Reflecting this dependence, the one road which goes round the island sticks close to the coast with no roads going inland, across country.

I love island communities because here people still hold on to a bit of the past. I love the fact that Iceland has one road, that the land has still got glaciers in it, that there is still fire in it. It is what Scotland could have looked like thousands of years ago.”

He speaks of the Cairngorms with their polished hills, their quarries and large U-shaped valley glens – the scars of former glacier activity – and contrasts it with present-day Iceland, where there is not one smooth mountain, and everything is rough and jagged.

It’s new and the glaciers have recently been on that land. They have recently pummelled their way through rock, opening up the valleys, revealing this raw rock face, which is crumbling, and I find that fascinating – how it is such a nearby land, yet in relation to Scotland, Iceland is a completely different dinosaur and that’s what drew me to it in the beginning.”

Dependence on the sea gave rise to skills such as fish tanning, which Zeki will be demonstrating in a workshop at the festival. The whole process takes 10 days to two weeks and the workshop will demonstrate the procedure from the messy beginning of scraping down the fresh skins.

Although any sizeable fish can be used, it is salmon skins – a waste product of fish farming – that Zeki will be using, along with heather for the tanning process, as there is an abundance in Orkney, although any tannin-containing plant will do.

The final product is a piece of pure leather, the uses for which are limited only by imagination, and perhaps size. Zeki will have to hand some of his own creations to provide ideas which might include belts, bags, hats, tobacco pouches etc.

Any community living on the coastline for a long period of time would have used the skins. If you don’t have access to a lot of mammals you look to the sea. The Inuit people of Greenland were also masters of fish skin tanning and are still tanning skins and making clothing today.”

Currently home in Scotland and working on his Mountain Leader qualification as well as doing lots of guiding and foraging, Zeki would like to see more people benefiting from connecting with their environment.

He himself spent a considerable amount of time living in a tipi on Skye, putting into practice the skills he was learning through the School of Adventure Studies, but he feels a certain reluctance in talking too much about it. It was something he chose to do for his own experience and he doesn’t want to add to the growing nonsense of publicity surrounding people who “think they are living off the land, but really only visit from time to time”.

I am just another person playing at it. I still have a home to come back to. The people who do it like the Bushmen are actually living it and they are the real survival experts.”

Still, for someone so young, Zeki has already learned a lot about the old ways and that knowledge influences his thinking and his way of being. Travelling, he says, when he has the opportunity and privilege, keeps him humble. His fitness comes from the environment, from walking the hills, not from a gym. He has the ability to bring people together wherever he goes, by gathering ingredients and preparing a meal, and he knows how to hold and sustain a conversation – yet another dying art.

These are the fundamentals of life, and the Bushmen he says, have mastered them, demonstrating a contentment which comes with a deep-rooted knowledge and respect for their land and a strong sense of community.