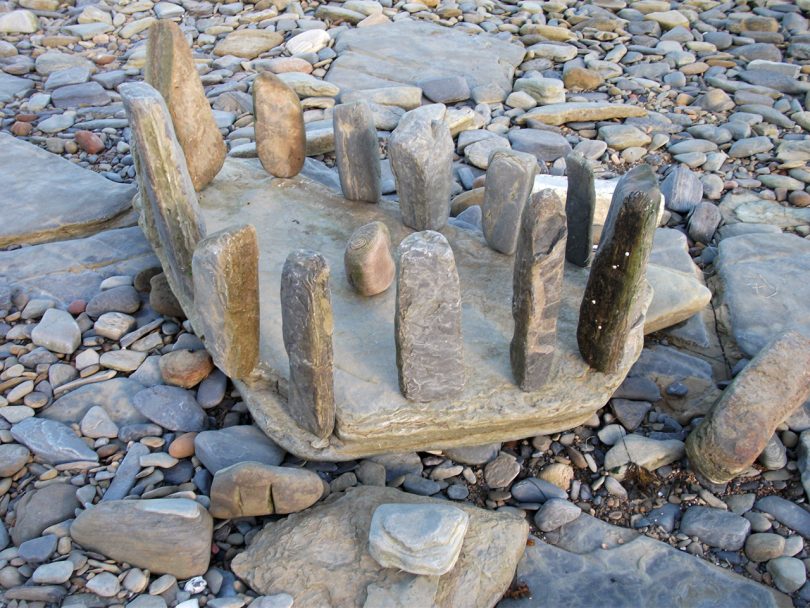 I believe this person to be a wizard who casts a spell to make the top-stones stay in place…. ‘Lithica Petrifactium!’

Then, our neighbour was talking with the mystery builder/wizard – who is a mystery no more. He’s called Bradford Spencer – here on holiday from Switzerland.

The stormy weather last week has already taken it – but for a time it stood – and stood for human endeavour and imagination.

Years ago I took Ben-The-Dog on his usual walk to the Bay and found stone ‘sculptures’ on the beach. Mike and I later met the couple who were ‘raising the stones’. They’re from Northumberland and were staying at a holiday cottage on the Bay. The man has a deep love of stone and raises these pieces whenever he gets the chance.  They were very much ephemeral pieces. Each day he made new ones – and each day the incoming tide knocked them over. They aren’t fixed in any way – he just finds the perfect point of balance and, as he said himself, “gravity is the glue”. I like that as, yes indeed, gravity is the glue, without which we’d all fly off into space!

The man said that he holds the stone, relaxes, and the stone just leaves his hands and finds its balance. I told him that this reminded me of something the Harray Potter (aka Andrew Appleby) said to me some years ago. It was about when he seeks inspiration to produce styles of pots from other times. He said something like – that he will relax, focus, let the inspiration work through his arms and hands, and the clay almost forms itself. The man’s approach to balancing the stones reminded me of that. Going with the flow.

We thought these pieces were great and also that it was good that he was happy to take so much trouble to produce something which was a delight to come upon on a walk, yet would then go with the next tide. Ephemeral sculptures.

And there are the structures which regularly appear at the Bay of Skaill….