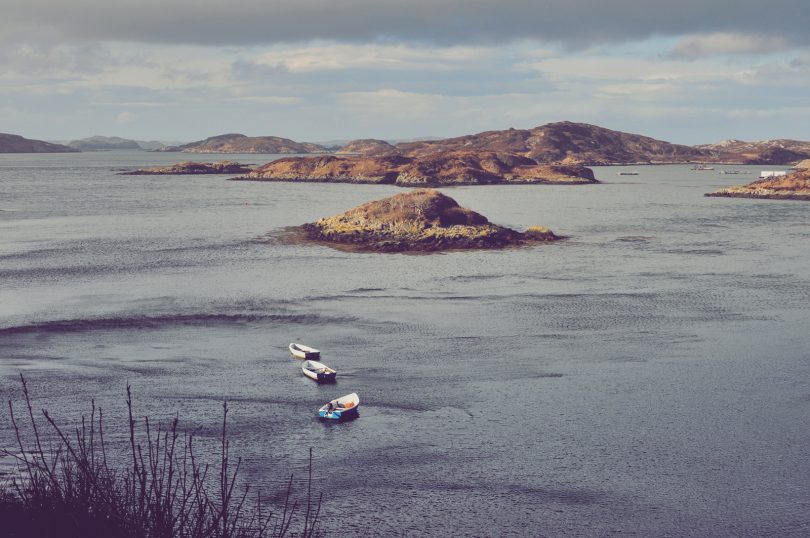 On the road in Sutherland photography by Selena S Kuzman

The rocks of Lewisian Gneiss, found across so much of the area – the oldest rocks in Europe – are 3 billion years old. For much of their existence the only life on Earth was microbes, with land creatures only emerging around 370 million years ago. For the rocks of the North West, on their long journey through deep time, the period of the human race is a brief flickering moment.

The Rock Stop gives us an insight into the world of those rocks – and the apocalyptic forces that shaped them. Hot magma surged up in volcanic flows, and a massive continental collision half a billion years ago pushed the great Caledonian mountain chain up into existence. Later came the great ice flows that U-shaped the valleys. You can handle examples of rocks and learn to identify them, and you can see from a sandbox how water and ice can shape mountains. And on a night with the sound of a roaring wind outside there are welcome cups of tea and coffee and hot chocolate from Jean, one of the team helping the Rock Stop, who’s also a director of the North West Highlands Geopark.

Chickweed and daisies, and the wind and the night

The speaker tonight is Anna Canning, an Edinburgh-based ethnobotanical researcher who describes some of the traditional folk remedies of the Highlands and modern scientific insights into them. She speaks about remedies involving slugs and snails, and the fact that some of the substances in snail mucin have been shown to be beneficial to skin.

We go on a virtual tour of plants, and learn that some familiar weeds of today were once highly valued. So chickweed (Stellaria media) was used in a poultice for abscesses, and daisy (Bellis perennis) flowers, boiled in honey, made a syrup to treat coughs, while the leaves were crushed with the flowers and applied to bruises.

There is great discussion afterwards, then off we go into the wind and the night, a mile down the road to the Kylesku Hotel. An old coaching inn dating back to 1680, it has been refurbished in Scandinavian style, and with its views of the mountains and its wood-burning stoves with armchairs around, it feels like a step across the North Sea into another world. It’s situated by the slipway of the ferry that used to cross the sea-loch in the days before the modern bridge was built, and you can sit through the day and watch the waves on the loch.

We’re on the road as part of The Travelling Scholars, an initiative by the British Science Association to provide talks on topics of interest to communities in remoter places. Local arrangements have been made by community groups with the help of Kirsteen Currie, one of the Highland Councillors representing North, West and Central Sutherland. The next day we set off on the road north, by Scourie and Durness and deep Loch Eriboll, in a land of rocks and heather and mountains in the distance with light shining on fresh-fallen snow, with the scale of the landscape becoming ever more vast. And now we are coming to another old ferry crossing, this time at the Kyle of Tongue, where several generations of David McLeod’s forebears operated the ferry across the Kyle up till 1953. Today’s bridge was completed in 1971.

David takes us to Bettyhill, to the Strathnaver Museum, developed by the local community in the former parish church of St Columba to tell the story of Strathnaver and the land of Clan Mackay, from Pictish times to the tragedy of the Highland Clearances. In the graveyard stands the Farr Stone, with a ringed cross and decorated panels, one of many stones whose origins are the subject of much debate amongst scholars of the Pictish period.

But for the story told within, the facts are all too clear. It was from the very pulpit of this church that the parish minister was forced to read out eviction notices to his congregation so that the little holdings of Strathnaver could be cleared away to make way for grassland and sheep.

Strath Naver used to be called by the old crofters the Pride of Sutherland,” wrote T. Ratcliffe Barnett, an Edinburgh minister who loved to travel the roads of Scotland. “These three straths – Kildonan, Naver, and Halladale – were once full of crofts, until the Sutherland clearances at the beginning of the nineteenth century swept the people from their native glens, compelling them to emigrate or to crowd down to the sea coasts. It is a tale of burning cottages and evictions. About 500 families were rendered homeless in Strath Naver, and in Kildonan about 2000 people were ‘cleared’ to make room for a few large sheep farms which the Napoleonic Wars had made more profitable.”

The exhibition in the church at Bettyhill shows the interior of an old crofthouse, with fireside implements and box bed, and there is the story of 6,000 years of life in the strath. Along the road through Strathnaver, information points form a trail giving the visitor a picture of the long period of habitation of the land. There are the remnants of Neolithic stones and an Iron Age broch, and then the ruined walls of cottages from which the occupants were driven out.

Tonight’s evening talk is in Melness, where Anna Canning gives a commemorative lecture in honour of an outstanding lady, the late Mary Beith, who showed in her studies of Highland traditional medicine the same character and commitment that she had brought to her earlier career as a campaigning journalist. She had the ability to probe deeply, to gather information piece by piece, to sift out key elements and carefully look for ways to fit them together, checking and testing all the way. Her book Healing Threads is a classic, full of knowledge and insight. “It’s a must-read for anyone interested in getting to the heart of Highland traditions of medicine while steering clear of kailyard notions of ‘ancient wisdom’,” says Anna.

Earlier, the travel and talks took some of us to Stoer and Lairg, and there were journeys along roads whose sides were lined with ploughed snow. The drive west from Lairg through Glen Oykel has fields with yellow gorse and sometimes farms with sheep, then a landscape of heather and shallow lochans, with massive lumpy mountains of Assynt appearing on the horizon, like giant bergs in an vast and ancient sea.

Tower by the sea

At Stoer the hall is close to the broch of Clachtoll, down by the beach, a ruined tower from the Iron Age. It is thanks to Historic Assynt that there is so much for the visitor to see today. Its volunteers moved a massive amount of rubble to enable the structure to be brought into view and studied. They repaired the lintels over the entrance passage and consolidated the walling around the entrance and they also made a key discovery about the end of the broch. They found that the pattern of rubble could only be explained by a sudden and catastrophic collapse of the tower, and hazel charcoal dated this to somewhere between 150 BC and 50 AD.

Dave McBain, the organisation’s treasurer, tells us the story of the work, and what this might mean for the study of brochs generally. There are around 500 or so of these towers in the north, particularly in Orkney, Shetland and Caithness, and also on the west coast. Some people say they’re the fortified keeps of warlords, others that they evolved from family dwellings called roundhouses. Dave points out that the work on the broch showed no signs of any conflict at the time of the collapse and that there are various items in quantities suggesting trading. And there is a possible picture of the broch as an overnight stopping-place on a major shipping route down the west side of Scotland and on into the Irish Sea.

The sea and the stars

So there is much discussion about the broch and Iron Age life, and traditions of the sea, where Dave’s father was a fisherman. With us is another of the Travelling Scholars, Matjaž Vidmar from the Royal Observatory of Edinburgh, who has been visiting Tongue and Bonar Bridge and various schools in between, to speak of astronomy and space exploration. The dark skies above Sutherland glitter with stars on a winter’s night, far from the light pollution of the cities and towns, and they sometimes seem so near that we might want to sign up for a rocket journey that could take us just a little nearer.

It will take a long time, says Matjaž, but the first step is to get up into orbit around the Earth as cheaply and efficiently as possible, and a new generation of rockets and rocketplanes is going to help us do that. He shows two pieces of equipment that came from space missions and we touch objects that have travelled several hundred kilometres up into the great darkness and emptiness that lies between us and the first stepping-stone on our longest journey.

And in the evening in the warmth and comfort of Davar B&B, we look out of the window at the lights of Lochinver harbour and think about the large Highland breakfast that Dave and Caren are going to produce for us in the morning, and how the cosmic scale of the ancient rocks of Sutherland is comparable to the lifespan of a star, and how one day the lights of the fishing fleet may be mirrored above by a light from a ship returning from exploring the sandy deserts of Mars, and how a visitor to this ancient land of Sutherland could spend a lifetime exploring its hills and lochs and still find something new and incomparably great.

This was first published in the May 2018 issue of KN Magazine.