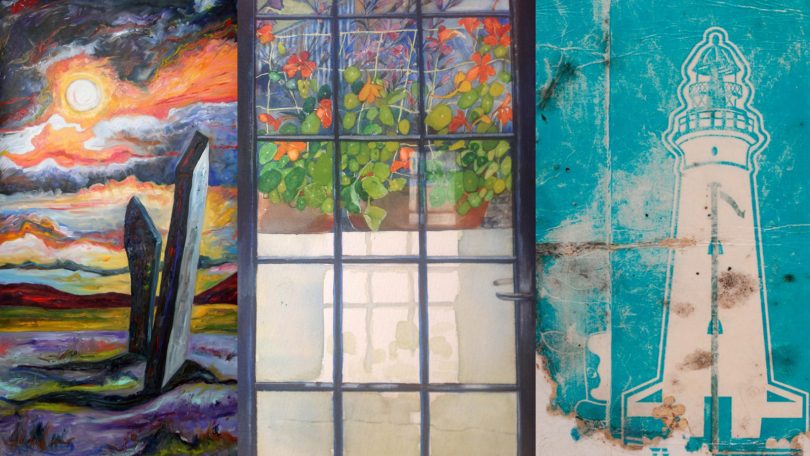 The windows along the main street of Stromness are the gallery for a new exhibition in this year’s Science Festival.

It’s the third Open Windows exhibition, with the work of fifty artists and writers framed in the windows of homes and businesses stretching from the Pier Head to beyond Stromness Museum.

The theme is Light, marking the International Year of Light, one of the main strands in the Festival programme.

There’s an early opportunity to see it as it opens on Sunday 30 August and runs to Sunday 6 September. “Open 24 hours a day!” say the organisers.

The artists themselves install their work in the windows, which are matched randomly with the works. The exhibition is not curated.

The exhibitors range from recent graduates to long-established artists and include painters, sculptors, photographers, illustrators and weavers.

The exhibition base is Northlight Studio where a large tapestry, the work of a group of weavers based at Northlight, will be on display.

Open windows is a biannual exhibition. The theme of the last one, held in 2013, was John Rae, with the title ‘No Ordinary Journey’, and it marked the start of the collaboration with the Science Festival.

Rebecca Marr, one of the organisers explains: “It was Ros Bryant and Howie Firth who first discussed holding Open Windows during the Science Festival. It seemed like such a good idea that we have coincided with them again. Art and science have such an enduring relationship after all. The theme of light is such a gift too with possibilities for lovely wide interpretations.”

Organiser Diana Leslie feels that the venue of the town is key to the project.

Stromness has a long, narrow thoroughfare to the Museum offering a natural gallery of windows. As well as housing Orkney artists from as far as South Ronaldsay, Westray and Sanday, we are also celebrating Stromness talent.”

The artist-run project began in 2011 and the organisers say it could never have come about without the generosity of shopkeepers and householders.

Ros says: “It’s my job to contact the window owners and each time we do the project I really enjoy that part because of the enthusiasm of folk.”

Participating windows will be identified by a white lightbulb sign to guide people along the journey from the Pier Head to the South End.

Most of the artworks are also for sale and can be purchased by contacting the artist directly. Details of each artist will be in the window.

In addition, brochures detailing the artists and the location of the Open Windows are available from the Pier Arts Centre, Northlight Studio and Stromness Museum.