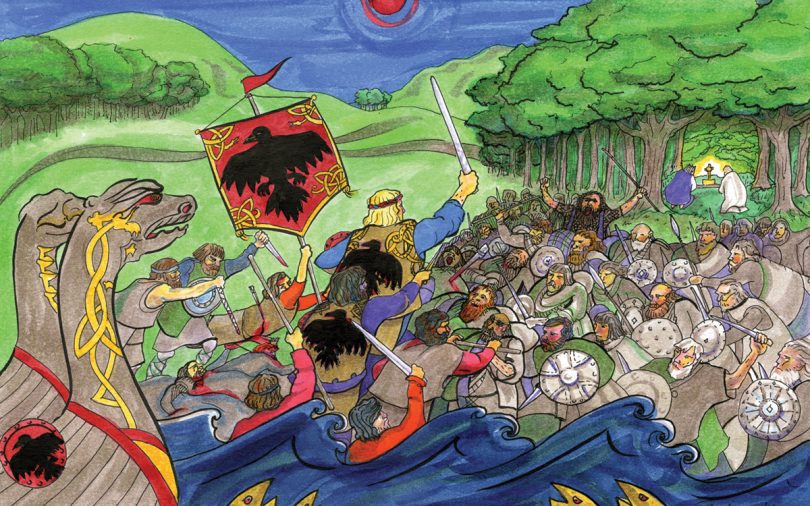 The Battle of Clontarf, on Good Friday, 23 April 1014, was a turning-point for the power of the Norse and Danes in Ireland.

The Irish high king, Brian Boru, was victorious in the battle, which took place outside Dublin. But he himself fell, as did Earl Sigurd of Orkney, fighting against him in support of the city-state’s Norse king. The Orkney earl bore a raven banner woven by his mother, a princess of Ireland.

To commemorate the occasion, the Isle of Man Post Office has produced a set of six stamps with paintings by the artist Victor Ambrus, whose status as an illustrator is almost legendary. Over the years he has provided images for almost 300 books and is known as the illustrator for the Channel 4 archaeology series Time Team, visualising the original appearance of ancient sites.

The stamps use six different renderings that are representative of war. The images created using watercolour and ink capture the stark brutality and ferocity of battle, and colour is applied in a bold and brash manner. The pictures show scenes from the battle as well as individual profiles including Brodir the Warrior and Earl Sigurd’s mother Eithne weaving the fateful banner.

An additional Orkney link comes through an accompanying text provided by Orkney writer and Science Festival director Howie Firth, and the story of Clontarf will be highlighted in several ways in this year’s Orkney International Science Festival. The story will be told of the tide calculations made by a 19th-century Irish scientist which confirmed the ancient chronicler’s account of a high tide coinciding with sunrise at the start of the battle. The Festival will also hear how the picture of a web of fate, used to describe the battle, can give us a surprisingly modern insight into 11th-century cosmology.

In addition, the Festival will feature a concert in the 12th-century St Magnus Cathedral, built by Earl Sigurd’s great-great-grandson, Earl Rognvald, with music by the Mayfield Singers and Paisley Abbey organist George McPhee and readings by David Grieve from Njals saga, the great Icelandic saga which has in its closing sections a detailed account of the battle. Danish scholar Dr Karen Bek-Pedersen will look at the structure of the saga itself.

Also in the Festival, Orkney’s Norse genetic links will be examined by Dr Jim Wilson of the University of Edinburgh, and the process of making ale in the Viking Age will be investigated by Graham and Merryn Dineley, brewer and archaeologist respectively.

It’s tremendous that the Isle of Man Post Office is marking the 1000th anniversary of an event that has resonated through the centuries in stories and sagas. The battle affected the lives of so many people and communities, from Ireland and Man to Orkney and Iceland. The sea route from Norway down through the Irish Sea and on the Mediterranean was one of the great trading highways of Europe at the time, and the Isle of Man was part of the complex mix of commerce and politics.

“The stamps are beautiful, capturing the swirl of the battle when the two armies clashed on the land between the Liffey and the Tolka on Good Friday 1014. It’s good to think of the shared appreciation in art and story bringing people together to remember those who lived and died at Clontarf.”

Victor Ambrus has produced some amazing images that capture crucial events in the thousand-year-old shared history of the Isle of Man, Ireland and the Orkney Islands. The Battle of Clontarf is a key event in history that has shaped the future of Ireland and of course the Isle of Man. These stamps pay a great tribute to the memory of the battle and King Brian Boru. We are very pleased to be able to offer our collectors such an important piece of history.”

The stamps can be viewed ordered online from Isle of Man Stamps & Coins.

Carol Kitson is an Orcadian living and working in Perth. She runs a small freelance business specialising in PR, copy-editing and proof-reading. In her spare time she is studying for a BA in English Literature along with Creative Writing. She is also a keen photographer.