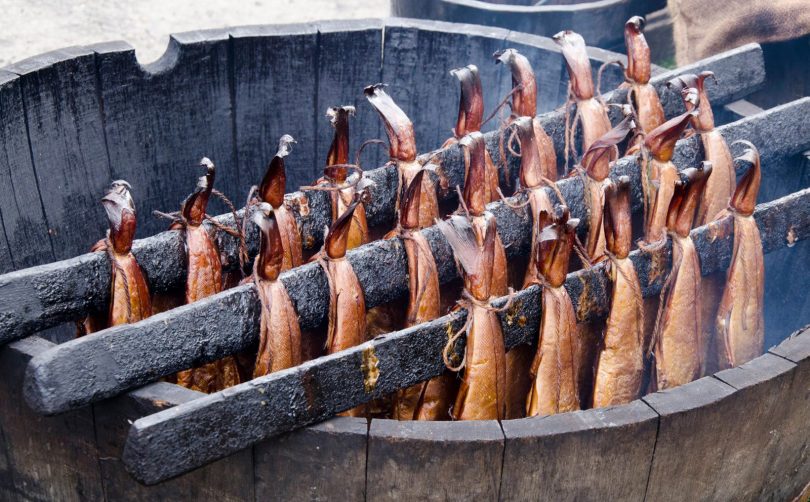 My father joined the business on his return from Japanese prisoner-of-war camp to form Barr Cochrane and Son, based at 142 High Street, Elgin.

Pappa became friends with the Countess of Seafield through their love of music, most particularly the piano. The Countess owned an impressive Bechstein Concert Grand, tuned regularly and lovingly by my grandfather. On one such outing he took me with him. I was at that age when being small of stature and sheltered in experience, everything was larger than life, in an Alice in Wonderland way.

The piano was, indeed, extremely ‘grand,’ dominating a round room of many windows which illuminated the space with bright sunlight. This in turn was reflected by large crystal door knobs shooting prisms of colour over the walls and ceiling. As Pappa tuned I sat on the floor nearby, listening, watching shafts of rainbow hues dappling the music.

With work completed for the day, it was decided, after due deliberation, to drive along the coast to the Station Hotel at Portsoy for ‘luncheon’.

Here the assembled company were ushered with due ceremony into a dark-panelled dining room to be seated round a vast white-clothed but well-appointed table. Warned to be on my best behaviour, I was seated propped up on several cushions with a large white damask napkin tied round my neck to catch the spills.

Mouthwatering smells emanating from the kitchen beyond heralded the arrival of a thick hearty soup contained in a large, brightly-coloured vessel which I now know was a soup tureen. This steaming receptacle was passed round the diners who ladled copious quantities into their respective wide-rimmed soup plates to sup the steaming contents with hunks of home-made bread and butter.

The first food journey of my life!

Since then I’ve visited the town many times, in its snug setting on the Banffshire coast. The old harbour is more than 300 years old, and was regarded as the safest in the north-east of Scotland. It handled much trade with England and Europe, including the shipment of Portsoy marble – actually polished red and green serpentine from a vein running through the area. Some of it was used in the Palace of Versailles.

The ‘new harbour’ was built in 1825 by the Seafield Estate for the growth of the herring fishing, and at its peak there were 57 local boats. Soon after came the development of stake-net salmon fishing.

The story of Portsoy and its industries is told in the Salmon Bothy Museum, housed in a vaulted former ice house built in 1834; the upstairs netting loft is now a very atmospheric music and theatre performance space.

The Scottish Traditional Boat Festival, now in its 21st year, brings more than 15,000 people to Portsoy for a weekend of great activity at the end of June. There are opportunities to see beautiful traditional boats from Scotland and overseas, and to learn sailing and other maritime skills. There is traditional music, song and dance, and also maritime and rural crafts, and in the Festival added another dimension with the Food Fayre at the Wally Green.

Each year the weather is a challenge but no matter because working together all involved with the Fayre have created something unique, which first and foremost is all about local food producers and the bounty of quality they produce, in cookery demonstrations and tasting sessions. The food on display is varied, from oatmeal products to Portsoy Ice Cream where flavours range from Chocolate Orange to Lemon Cheesecake.

Some Orkney fare came onto the Portsoy menu in March this year when the Portsoy Festival’s annual fundraising dinner in the Station Hotel featured food from ‘Peedie Producers’ in Orkney.

Serves 6 to 8 people.
Takes 10 minutes to make.
No cooking required.

Made with Selected Orkney Beef and Orkney Buffalo

Roll out the puff pastry and cut into 6 squares or rounds. Brush with beaten egg and bake in a hot oven at 200C, 400F, Gas 6 for 15 minutes or till risen and golden.
Serve in heated individual dishes (I use soup bowls instead of pie dishes).
Spoon in the meat and top with the hot pastry and serve immediately.

Divide the mix evenly between the four and press down. Put into the fridge to set.
Meanwhile make the topping.

Use soft fruits in season – I like to use a mixture raspberries, strawberries, redcurrants and blueberries. If not use frozen berries thawed. You also need icing sugar.

There are as many bere bannock recipes as there are bannock bakers.
This recipe was given to me by my friend chef Paul Doull at the Foveran Hotel, St. Ola. He bakes bannocks fresh every day. Imagine having a kitchen window that looks out over Scapa Flow! That is just where he is.
Makes 2 round bannocks.
Bake on a girdle or thick-bottomed frying pan.
Takes 20 minutes to mix and make.