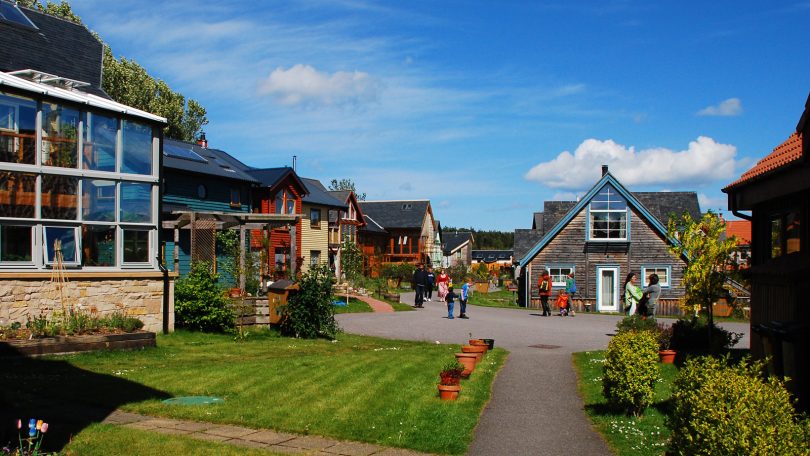 It is fitting to have a discussion here in Orkney about housing. Here, where the oldest house in Europe is to be found, at the Knap of Howar in Papa Westray, and also where one of the earliest examples of Neolithic village life is to be found in the settlement at Skara Brae.

It is a complex subject. In many ways it is a barometer of social change, and until recently we saw housing as one of those permanencies on the landscape.

Let us take permanency for a start. In Orkney we are surrounded by archaeology yet there are huge changes in our attitude to physical things.

Today the mantra is Reduce, Reuse, Recycle. We recycle fridges, cars, clothes, and we should be starting to do it with houses.

I was astonished to see the Kirkwall Black Building, the old wartime repeater station, with its solid concrete bomb-proof roof, ‘comminuted’, a term for reducing it to tiny bits of rubble by a giant machine.

And as planning rep for the Community Council I have started to see quite a few applications passed which state baldly ‘demolish existing house and erect dwelling with air source underfloor heating.’

Our old houses are at a great disadvantage. To retrofit insulation as well as modern plumbing, electrics, and communication equipment, is very costly, and at the moment the VAT tax regime favours the new build.

For a long time the French architect Corbusier was ridiculed for saying a house was a machine for living in.

Perhaps his age has come, for the modern house with the rising cost of fuel has now to meet stringent energy efficiency standards.

So while a few brave souls sink their savings into restoration, many are demolishing old dwellings and starting anew with an underfloor slab, heated by some form of the new alternative energy, be it windmill or air source.

A pattern of people

And the size and shape of our homes is changing to meet a new demographic. Here in Orkney we do not have massive population pressure but our age is characterised by later marriage; young people are not content to stay at home though, but want their own flat and there are more single-parent families.

And divorce rates are up. When a couple split, both parents then need a separate home with enough space for the kids to visit, so the housing need effectively doubles.

And there is the phenomenon of people living longer. Not only is the house blocked for their offspring for longer, but as people age, their housing needs change; they may require single-storey, low-maintenance, adapted small houses.

In Orkney we have a vibrant economy with a low unemployment rate but – and this is a big but – the wage rates for many are low, employed as they are in shop work, tourism, office work and transport.

This means the pressure is on for affordable social housing.

The great thing about Orkney is that it is a microcosm, and elements of all these things can be seen in our housing pattern today.

We have small new housing developments with high-energy-efficiency houses, we have Town Centre Heritage Initiatives bent on preserving the old cores of Stromness and Kirkwall , we have individuals putting on turf roofs, we have tree planters, path creation, the beginnings of electric cars and trucks.

The world over there is on a trend to live in cities. People seem to want the services of shops, hospitals, dentists, entertainment, sports facilities and schools.

So Kirkwall is ballooning and a creeping suburbia is emerging. Parts of Kirkwall ‘could be anywhere’ as a resident commented.

There is a danger of isolation, loss of identity, a loss of sense of place in these suburbs.

This is very sad, for the one thing I think Orkney has provided to its citizens is a strong sense of place.

Planning policy has tried to counteract this convergence on Kirkwall by encouraging clustering in smaller settlements like St Mary’s, St Margaret’s Hope, Burray, Stromness, and Dounby.

Planning is also aware of the pressure on land.

Jersey used to be an agricultural gem; now it is almost completely covered in expensive housing and service workers commute in from France by ferry. We need to avoid the Jersey syndrome.

And so the challenge is to provide the large number of houses that it is said to be required for the future; these will be mostly social housing, single, or small family occupancy. Not necessarily extensive housing with large gardens.

So we need to look at using brownfield sites, redevelop underused dwellings, demolish redundant buildings of little merit, and encourage the development of flats in the towns. Unlocking the flooding blight on Kirkwall West would help. Here we could have shops or parking below and flats above.

But while we ensure they are super energy-efficient, that they are aesthetically pleasing, both to look at and in landscape terms, and that they are near schools and shops, we need to retain that sense of community and identity, the small scale and natural cohesiveness for which Orkney is renowned and which is epitomised in our ancient settlements at the Broch of Gurness and Skara Brae.