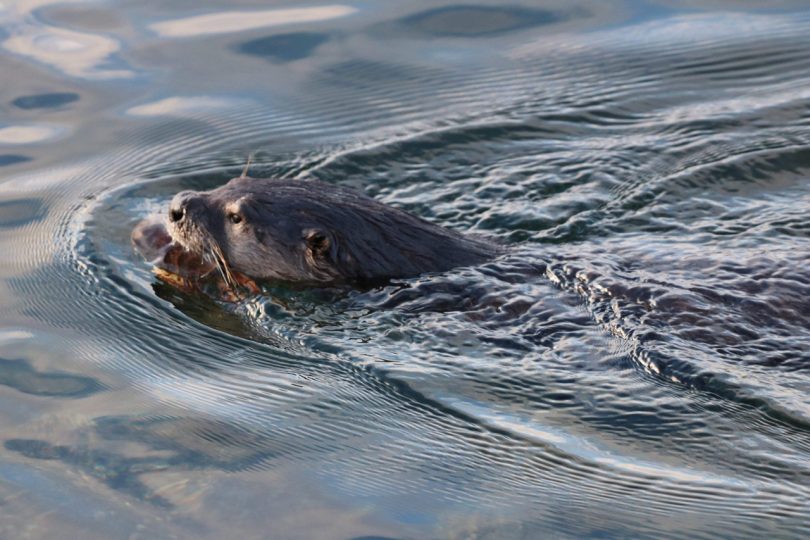 A few years ago we made a pond in our garden. We filled it with water and started to plant it up.

Next day I went down to the pond and found the white quartz pebble lying by the side, between the pond and a mound we made from the soil which came from the hole we’d dug for the pond. This puzzled me, greatly. I don’t discount fairy goings-on but when it’s right there in front of you, it’s a bit … puzzling.

Then I remembered that our neighbour told us that there are otters around here. We’ve found sections of sea-urchin shell on the beach, neatly broken, and thought that they had probably been eaten by otters.

We thought they lived down by the shore and didn’t realize that they came up to the houses.  We decided that the puzzle of the pebble was probably … otters playing with the stone.

Imagine an otter coming across our garden, finding the newly made pond with something white glimmering at the bottom of the deep bit – dived in, picked up the stone, brought it ashore to see what it was, found it wasn’t edible, and left it there. Mike and I stood by the pond and solemnly dropped the white quartz pebble back into the deep bit. And ….

A couple of days later it was back on the side again! So I placed it on the Howe, and left it there.

We love the pond – here’s what I wrote to someone when we first filled it.

Did I tell you about our pond?

We’ve made a pond in the middle of our meadow. It’s an oval shape. The day that we filled it with water Mike was just finishing off the edges, when the moon rose. So we had an oval of still water, in the meadow, reflecting the moon. I called it ‘Moony Pond’. It also reflects the sun and the sky, so sometimes we have an oval of sky, in the meadow. When the wind blows, it ripples, which is also pleasing. When it’s planted up it’ll change but, for now, we have an oval of water doing things in the middle of the grass. It also balances the spiral, beautifully.

I believe this to be the kind of thing which would have delighted the ancient folk. The land, connecting with the sky, through the water. The water, pulling down the sky, into the land. The planets, shimmering in the water. We’re very pleased with it. In my world, this all means something!”

And, we watched the eclipse of the sun in the water in the pond so’s not to damage our eyes – now that was something to see!

Life is brim-full of wonders and they do, truly, balance the … other stuff.