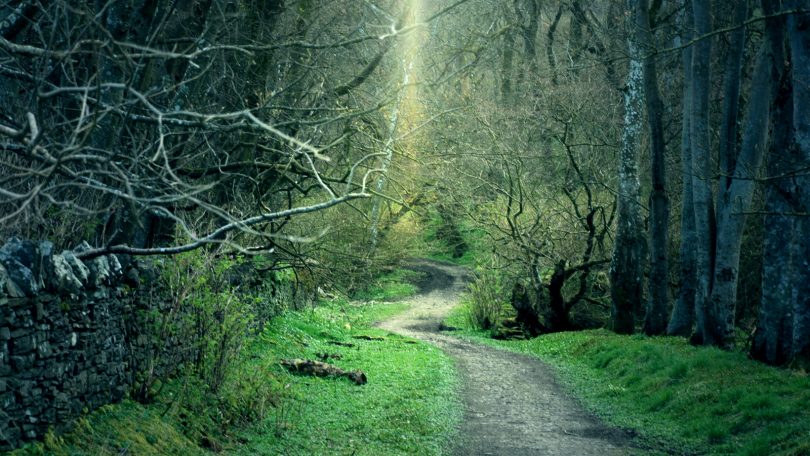 Trees in Orkney grow very slowly; initially most of their effort goes into building up their base, the root system. But once this has been established, the tree can grow steadily, all the better for its slow start, and the range of what can be grown is quite varied.

At Carrick in Eday there is a thick growth of larch; at Balfour Castle in Shapinsay there are large-leaved horse chestnuts. Sycamore is grown around many farms and houses and is numerous in plantations such as Binscarth Woods in Finstown and Berstane Woods by Kirkwall.

At Binscarth, planted in the middle of the nineteenth century, the use of tatter flags was pioneered in choosing the least exposed location for the house; the greater the tattering of the flags, the stronger the wind in that section. The trees are set in a sheltered valley, a mix of sycamore, ash, beech and larch, with conifers that were added later; and in spring the ground underfoot is bright with bluebells and primroses, pink purslane and yellow celandines, and golden kingcups in the little burn that runs to the sea.

A little way over the hill beyond Binscarth, Eoin Scott developed a woodland on the farm of Redland. Back in 1976, the Department of Agriculture refused him a shelter-belt grant as they said that trees would never grow there, so Eoin went ahead and did it anyway. Now there is a canopy of trees, reaching up the hillside along the line of the burn – whitebeam and sycamore, ash and rowan, hornbeam and horse chestnut, lime and maple, and a eucalyptus too.

The Forestry Commission asked him to experiment with alder, and of the varieties they provided, Sitka alder grew best. “With hindsight I should have had the Sitka variety of lodgepole pine as well,” he said. “I chose the Washington coastal variety, which grew fast in its early years, but its roots were too shallow and it came down. The Sitka variety would have been more deeply rooted.”

At Happy Valley in Stenness, Edwin Harrold worked for half a century to create a woodland that has been visited by people from many parts of the world. Its original name was Bankburn, and the new one developed from a comment in the visitors’ book: “What a happy valley this is.”

Edwin went to live there in 1948 and began to plant trees around the Russadale burn – sycamore and beech, oak and elm. In the sheltered setting they provide, a monkey puzzle tree flourishes, and on the ground there are bluebells and wild flowers. He shaped the flow of the burn itself, with some blasts of gelignite to open out ponds, and he built up stonework in various areas.

The burn provided him with electricity (from a generator he built himself) and water (from a hand-driven pump), and he would sit in the little stone house with its heather roof, with a peat fire burning, to share stories with appreciative visitors. The trout in the burn used to come to the surface for pieces of cheese from him, and at one time he fostered a young crow which used to fly alongside as he cycled down the Bigswell road for the bus.

When The Scotsman created an environmental award in memory of the naturalist David Stephen, it was Edwin who was chosen in 1990 to receive the first one. After his death in 2005, at the age of 97, the future of Happy Valley seemed uncertain, but the owner, Professor William Isbister, gifted it to Orkney Islands Council, along with four fields, rather than putting it for sale. Now a group of Friends of Happy Valley has developed to look after what the Reverend Tom Clark described at Edwin’s funeral as “a little touch of heaven on earth”.

In the village of Finstown, Jockie Wood’s garden on the Heddle Hill road is renowned, with a wealth of different plants in sunny spaces and shady corners. “You find plants for different locations,” he says, “for the dry slopes or for the wet boggy bits” – and he has a wide variety of trees, shrubs, old fashioned roses and herbaceous perennials.

The slope is terraced with little drystone walls which he built himself, from stones he gathered over time – “It got to be the case that there never was an old stone building that was being pulled down in Finstown but I was there!” The various gardens on the road make an attractive sight, and a community garden is developing nearby on land donated by the Firth family who used to run the quarry on the hill.