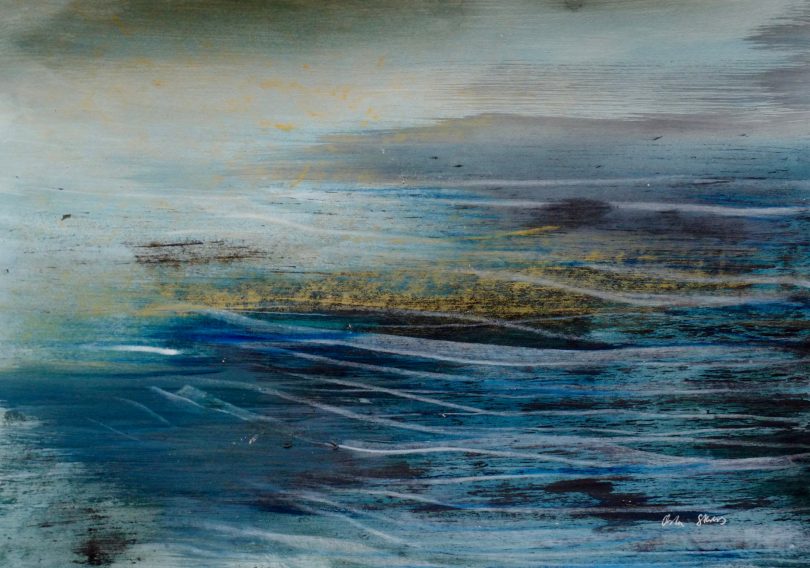 Which colours might be evoked by the sound of feet sinking into dry sand, or the wind swirling through a mountain valley? How might it be possible to interpret those visually and what tools could be employed in that process?

As an artist with musical ability herself, Orla Stevens has been reflecting on, and experimenting with these questions as part of a visual and aural collaboration with Nordic Viola. Entitled Sagas and Seascapes, the project takes Norse stories and landscapes around the northern sea routes as inspiration. Initiated by Katherine Wren, after a year’s sabbatical during which she spent six months exploring the history and landscape of the north Atlantic territories of Iceland, Greenland, Faroe, Orkney and Shetland, the first part of the project resulted in a musical response to these landscapes and was featured in an online concert as part of last year’s Orkney International Science Festival.

Expanding the project further this year into a new concert collaboration, Orla’s role was to respond visually through exploration of the musical narrative and sense of place. This took her to Orkney in July to research her role together with the musicians.

It was the first time I had met the composers so it was an opportunity to learn more about them, their music and practice, how they create, and discover how they imagined the visuals and what they considered the most important elements from their pieces that they would like me to capture. Then it was my job to try and tie it all together and create something visual.”

Orla graduated from Edinburgh College of Art in 2018 in print and textiles and has always been inspired by the Scottish landscape. She appreciated the structure offered by the design school along with the freedom and experimentation offered by textile work and the opportunity for creativity and experiment.

These are techniques she has continued to experiment with and incorporate into her own work – combining screen printing and traditional painting methods on unprimed fabrics so the dyes can really sink in. The structure from the pre-planned and prepared screen-printing elements, which give clean lines, combine with the looser and more intuitive painting techniques.

I’ve been merging together these two very different ways of working in some of my pieces. It’s really fun because the printing side makes you really think and have a plan, and then the painting side is kind of just tuning in to how you’re feeling or where you are or whatever you’re doing in the moment.”

A love of the outdoors

Appreciating structure and spontaneity, Orla enjoys working with other people and is comfortable with a multi-disciplinary approach, finding inspiration for her Scottish landscapes from a variety of sources. Born into that landscape and with the Trossachs National Park as her back garden, her work is strongly influenced by her childhood.

I think how I’ve ended up doing what I am doing is through a long love of the outdoors. Growing up I was outside most of the time so as I’ve been developing, I’ve basically married all the things I love into what I do, so being outside, hill walking and camping has naturally fed into subject matter.

Becoming part of the Nordic Viola project seems part of a natural progression. Just recently she took part in Aural Textiles, a collaboration involving artists and makers from all over Scotland in the discovery of visual responses to sound recordings.

The exploration of techniques which allow closer connection and attunement with a sense of place have always fascinated Orla, particularly how this emotional response can then be translated and incorporated into visual elements through mark making and expressive movements – a bit like trying to incorporate the sound of the sea or the wind into a landscape painting.

As a result of the Aural Textile project, Orla has produced a series of sketch books and has also been influenced in the tools she now chooses to make different marks.

It has changed what I use. I used to be a bit boring and just use brushes, but now I use cutlery, bits of wood and sticks, scraps of paper, old bits of fabric. It has really pushed me to experiment with mark making and also directed my use of colour.”

Recently she has begun collating her own aural colour library, logging the colours she associates with particular sounds. So, for instance, lilac might be associated with walking on sand. It might not be a direct representation of the aural to the visual but a response to the emotion which arises.

With sight, sound and touch

This is not the first time Orla has experimented with art and music. While at university she studied walking songs, their particular rhythms, and how to respond to those through mark making. That was her first delve into this particular interface and has proved a timely segue into her new  collaboration with Nordic Viola.

After meeting the six Nordic Viola composers for the first time in Orkney, Orla worked with them and their compositions to enable a visual interpretation of the pieces to gradually emerge. The musicians have taken their inspiration from Icelandic settlement, ancient sites, folklore and even the journey of the remains of St Magnus from Birsay to Kirkwall.

While she initially worked to produce one painting per composition, Orla feels there is a wealth of material to capture and process, and may well expand in her own time in the future.

For an artist who works from a deeply embedded sense of place, Orla combines the three senses of sight, sound and touch in her work and this latest collaboration with Nordic Viola has enabled  her to explore the seafaring connections, music, culture and folklore which connects the islands of the North Atlantic.