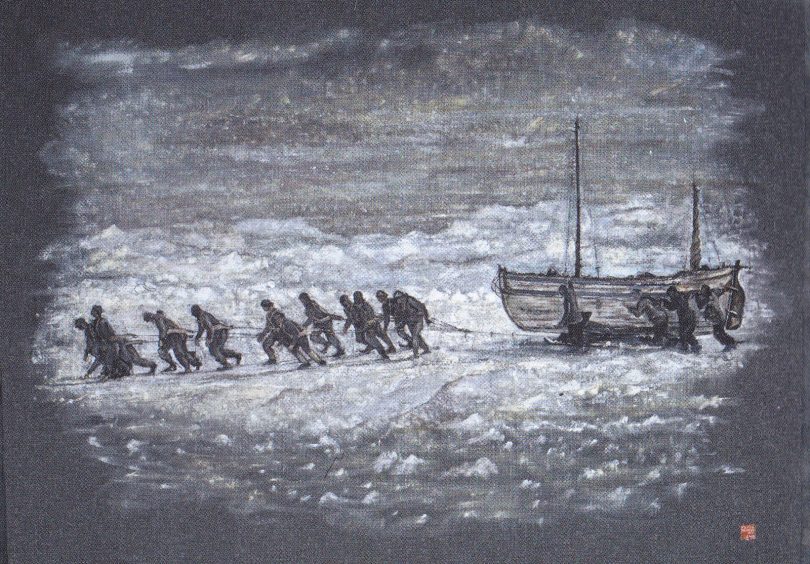 Italian artist Paola Suh Folicaldi has never been to the Antarctic, yet through immersing herself in the diaries of Ernest Shackleton and the photographs of Frank Hurley she has produced an outstanding series of paintings of the Endurance Expedition of 1914-17, which has astounded even seasoned polar explorers like Professor Peter Wadhams.

The photographs she had to work from were all black and white, but through reading Shackleton’s evocative descriptions she created her own colour palette which she interpreted as more representative of the conditions the men on the Endurance Expedition would have encountered 100 years ago than the bright images of blue and white which we are accustomed to seeing today.

Peter, who has travelled to the Antarctic on several occasions and is also a painter, found it particularly amazing how Paola had managed to capture the feeling of the ice and the sea and, in particular, the unique colour which appears just as the sea makes the transition from water to ice.

But why would an artist who previously knew nothing about Shackleton, or Antarctic expeditions, suddenly develop such a deep interest and devote more than two years to painting 15 large panels and 20 portraits?

The story begins in Fermo, Italy and a friendship with Dr Maria Pia Casarini, who had become director of Fermo’s Polar Geographic Institute and Museum in 2011. Maria Pia explains:

Part of my educational work for the city and for the museum was to set up exhibitions, always on a shoestring, because we had a very low budget. The centennial of the Endurance Expedition came in 2014 and what I wanted was a simple exhibition which would commemorate Shackleton. I had spent about 13 years in the Polar Research Institute in Cambridge, I did my masters in Polar Studies and my husband [Peter Wadhams] was director, so when I went to express my wish to have an exhibition, I honestly expected a bit of nice treatment from them.”

The institute is the curator of photographs from the Endurance Expedition and Maria Pia was told that if she wanted to use those images for 30 days, she would have to pay £4,000; which was out of the question.

She was aware of Paola’s work, having seen her Renaissance-style paintings of saints, and thought she would ask if she could produce a few small drawings based on the photos Maria Pia had in a book about the Endurance Expedition.

We had a meeting in my office, and I showed her the book that had most of the photographs taken by Frank Hurley and she just went off, and after a very short time called me and said she had done something. The something was a painting of the ship on her mother’s tea towel, so I went to her apartment in Fermo, and I was just astounded, because I just expected some drawings, but what she presented to me was this amazing painting!”

The colours of the past

Paola did a lot of work getting inside the expedition by reading Shackleton’s diaries and looking at Hurley’s photographs which, she says, allowed her a window of entry where she was able to gain an understanding of what conditions must have been like.

This deep exploration of a subject is part of Paola’s creative process and one she has used to interpret many other projects including her series of medieval saints. She also enjoys experimenting with different materials, so the saints were depicted on pieces of old wood, and for the Shackleton paintings she used heavy furnishing cloth and artificial suede for the larger works. This had the additional advantage of making the pieces more easily transportable and, borrowing inspiration from oriental scrolls, Paola rolled the paintings around a metal pole from Ikea, meaning all the works fitted in two ski bags and were even within the Ryanair weight limit.

The portraits however had to go in a box as these were painted on sackcloth over a rigid structure. Paola felt that through the photographs Hurley had been able to express the individuality of the crew which made it easier for her to interpret.  She selected a very limited colour range – blue for the jackets, a pale sandy colour for the woollen jumpers, and some sienna to show faces which had been burned by the elements.

She had begun with the portraits through which she became familiar with the characters and the drama of the expedition and knew she needed something much bigger to express that part of the story. This led her to the use of furnishing materials and the scope and range of textures they offered.

The most famous photograph of the Endurance itself was taken at night using a flash.

I remember the first thing Paola told me was that it’s not black, black doesn’t exist in nature. She told me she was going to do something different so she bought strips of artificial suede, then put them together so the ship is on three separate panels that can move in the air. It is absolutely stunning and was actually exhibited in the dining room at Clare Hall, Oxford and people were just amazed. They said it was one of the best exhibitions that the college has ever done.”

In a speech at that exhibition Paola compared Shackleton to Odysseus but whereas Odysseus returned alone, Shackleton returned with all his men.

In addition to interpreting the old black and white photographs, Paola also created original paintings based on Shackleton’s writings and descriptions of what happened after the Endurance sank in the Weddell Sea. From these she painted the journey the crew made in three little boats to Elephant Island and the mighty wave, described by Shackleton, which almost swamped the James Caird on the way to South Georgia.

It is perhaps hardly surprising that after two years of intensely engaging work Paola says she felt a little unbalanced and spaced out having completed all the paintings. She had originally thought it was because there was a lot going on in her life at that time – she got married, moved to Sweden and underwent many changes, but on reflection she felt she had become so deeply involved in the story that it took a degree of adjustment to fully return to everyday reality. At one point even her son had been caught up in the adventure and had based his final piece of schoolwork on the Shackleton expedition, which had allowed him to include a variety of subjects – history, geography, science, art and literature.

Now in Sweden, Paola is noticing the different colour of the sea which she describes as a kind of petrol, oily blue, more in keeping with how she imagines the sea around the Antarctic, and very different to her previous experience of the Mediterranean.

Looking to the future

A rather sad end note to this tale is that currently all the paintings are in Paola’s home. As a full exhibition, they were displayed in the Palazzo Buonaccorsi, Macerata, Italy and later at Clare Hall, Cambridge, but plans for the exhibition to tour Australia and New Zealand were cancelled with the arrival of Covid-19.

Next year, January 5 marks the 100th anniversary of Shackleton’s death at just 48 years old. At that time, he was just beginning another expedition on the Quest, which was to be biological rather than exploratory, and he was in South Georgia, at harbour, ready to set off. His last diary entry the day before his death reads:

In the darkening twilight I saw a lone star hover gem-like above the bay.”

Maria Pia is hoping that by next January it will be possible to exhibit the paintings again, in memory of the great explorer, but admits to disappointment in the lack of interest shown so far.

It is surprising because the exhibition is not difficult or expensive to move because of the excellent way of transporting it, and it is also a work of art but with a base in both history and science.”

For Paola this uniting of disciplines was one of the most interesting aspects of the project, but somehow it had worked against them as there was little interest among artistic milieux in the story of science and equally the scientific community was not really interested in the art, so the exhibition has fallen between two stools.

Enquiries to museums and art galleries especially in England had returned polite replies but informed them the exhibition would be superfluous as they had already covered Shackleton in great detail. Most of the interest had come from Australia and New Zealand, but that had to be shelved because of the pandemic.

They had just built a sort of theatre area and we thought they might be interested in the paintings as a permanent exhibition. But they showed no interest, in fact even brushed us away. We had no idea we would meet this kind of barrier. The paintings are beautiful to look at anyway and they also tell the very interesting story of the endurance of this man who manages to save everybody against all odds. It is the stuff of novels.”

Paola concludes that perhaps in our lives today it would help us all to be more like Shackleton, someone who encountered numerous difficulties, overcame the odds, never gave up and brought all his men home safely.